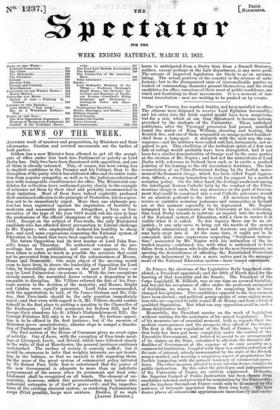 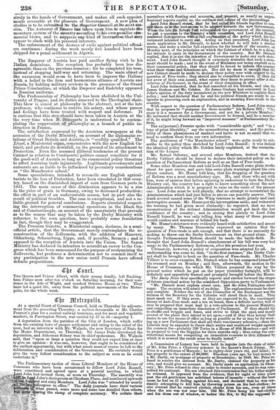 In France, the elections of the Legislative Body have:been com-

pleted; a President appointed ; and the 29th of March fixed for the meeting of that Assembly and the Senate. The President of the Corps Legialatif, /if:Billault, was at one time an avowed Socialist ; and beyond his acceptance of office under the professed antagonist of Socialism, no reason is known for suspecting him to have changed his opinions. Five candidates opposed to the Government have been elected ; and political gossip speaks of some eighty mem- bers who are expected to rally round M. de Moray and form a kind of qualified Opposition. But what can any opposition avail in such a sham deliberative body?

Meanwhile, the President carries on the work of legislation without waiting for the assistance of his unreal Legislature. Two of his measures are of essential moment, both as regards their im- mediate consequences and the prospects they afford of the future. The first is the new regulation of the Bank of France, by which that body has been put more completely under the control of the Executive Government, and induced to assent to an arrangement of its claims on the State, calculated to alleviate the financial dif- ficulties of Government at the expense of its own security as a commercial institution. Coupled with these is a sudden reduction of the ?rate of interest, utterly unwarranted by the state of the French money-market, and wearing a suspicious aspect of preparations for further tampering with the natural tendency of commercial opera- tions. The other measure alluded to is an interim decree relative to public instruction. By this edict the privileges and independence of the University of France are entirely suppressed. Hitherto, the Superior Council of Public Instruction has been choseh from candidates selected and presented for nomination by the University; and the teachers throughout France could only be dismissed by the sentence of tribunals appointed from their own body. The new decree places all educational appointments immediately and exclu-

sively in the hands of Government, and makes all such appoint- ments revocable at the pleasure of Government. A new plan of studies is to be submitted to the Superior-Council at its Alex-taw- scion. The Autocrat of France has taken upon him to regulate tote monetary system of the uountryaccording to his ownveonliar mercial views, and to suppress any kind df instentifiewthateary appear to clash with his personal interests.

The enforcement of the decrees of exile against political offend- ers continues : during the week nearly five hundred have been shipped for a penal settlement in Algeria.