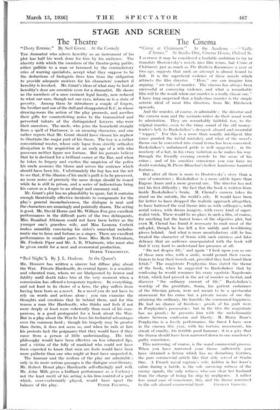 Studio One, Cinema House, Oxford St. I SUPPOSE it may be considered a laudable ambition to try to translate Dostoicvsky's novels into film terms, but ('rime et Chdliment, just as much as Thr Brothrrs Karamazov a year or two ago. suggests that such an attempt is almost bound to fail. It is the superficial violence of these novels which attracts the film director. " litre," one can imagine him arguing, " are tales of murder. The cinema has always been successful at conveying violence, and what a remarkable film will be the result when our murder is a really classic one." I have long suspected that a high-class murder is the simple artistic ideal of most film directors, from Mr. Hitchcock upwards.

And the murder, of course, is admirable : the director and the camera man and the scenario-writer do their usual work to admiration. They arc remarkably faithful, too, to the original murder, even to the tinny sound of the old money- lender's bell, to Raskolnikov's decayed, absurd and mournful " topper." For this is a more than usually intelligent film (once granted the initial mistake), and what of the novel's theme can be converted into visual terms has been converted. Raskolnikov's unbalanced pride is well suggested : in the mockery of a hat, in his crazy isolation as he makes his way through the friendly evening crowds to the scene of his crime ; and of his sensitive conscience you can have no doubt watching M. Pierre Blanehar's hollow handsome haunted features.

But after all there is more to Dostoievsky's story than a case of conscience ; Raskolnikov is a more subtle figure than Eugene Aram and a more general one. The director has not met his first difficulty : the fact that the book is written from inside Raskolnikov's brain. M. Chenal's camera takes its stand on the outside, the world's side. It would have been far better to have dropped the realistic approach altogether, to have battered the real theme into us with soliloquies, with aerial voices, with dream imagery, with every kind of super- realist trick. There would be no place in such a film, of course, for anything but the barest bones of the objective plot, but even M. Chenal has found it necessary to omit most of the sub-plot, though he has left a few untidy and bewildering pieces behind. And what is more unsatisfactory still, he has treated the character of Sonia with such curtness and false delicacy that an audience unacquainted with the book will find it very hard to understand her presence at all.

" Do not despise life," and again "I look upon you as one of those men who, with a smile, would permit their execu- tioners to tear their bowels out, provided they had found their fetish." The magistrate Porphyrius thus stated the theme of the book, when he suggested to Raskolnikov that by confessing he would renounce his crazy egotistic Napoleonic fetish, which had proved in the act of murder so bestial, and discover " the ordinary current of life." Raskolnikov's worship of the prostitute, Sonia, his patient endurance of the Siberian prison, were not meant to be a spectacular atonement for his crime but a private means of one day attaining the ordinary, the humble, the communal happiness. He had no chance of freedom : proofs of his guilt were in Porphyrius's possession ; but in the film the magistrate has no proofs ; he presents him with the melodramatic choice between confession and liberty. M. Harry Baur's Porphyrius is a loN ely performance, the finest I have seen in the cinema this year, with his tortoise. movements, his streak of cruelty, his terrible good humour ; it is a pity that the drama should have been narrowed down to one murderer's guilty conscience.

This narrowing, of course, is the usual commercial process. When you have narrowed your theme sufficiently you have obtained a fiction which has no disturbing features, the pure commercial article like that ably served at Studio One. A French naval captain's wife, hidden in her lover's cabin during a battle, is the sole surviving witness of the enemy signals, the only witness who can clear her husband from the charge of losing his ship by negligence. A rather less usual case of conscience, this, and the theme narrowed