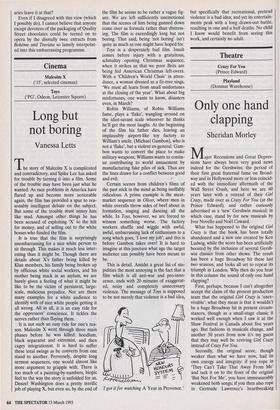 Long but not boring

The story of Malcolm X is complicated and contradictory, and Spike Lee has asked for trouble by turning it into a film. Some of the trouble may have been just what he wanted. As race problems in America have flared up and become more noticeable again, the film has provided a spur to rea- sonably intelligent debate on the subject. But some of the trouble must annoy him like mad. Amongst other things he has been accused of exploiting 'X' to the hilt for money, and of selling out to the white bosses who funded the film.

It is true that the film is surprisingly unembarrassing for a nice white person to sit through. This makes it much less inter- esting than it might be. Though there are details about X's father being killed by Klan members, his family being broken up by officious white social workers, and his mother being stuck in an asylum, we are barely given a feeling of what it might be like to be the victim of persistent, large- scale, malicious prejudice. Nor are there many examples for a white audience to identify with of nice white people getting it all wrong. All in all, it is an easy ride for the oppressors' conscience. It tickles the nerves rather than flaying them.

It is not such an easy ride for one's rea- son. Malcolm X went through three main phases before he was killed: hoodlum, black separatist and extremist, and then cagey integrationist. It is hard to suffer these total swings as he converts from one stand to another. Perversely, despite long sermon sequences, one would almost like more argument to grapple with. There is too much of a painting-by-numbers, biopic feel to the way the story is unfolded for us. Denzel Washington does a pretty terrific job of playing X, but even so, by the end of the film he seems to be rather a vague fig- ure. We are left sufficiently unemotional that the scenes of him being gunned down come over as formula rather than distress- ing. The film is exceedingly long but not boring. That said, being `not boring' isn't quite as much as one might have hoped for.

Toys is a desperately bad film. Insult comes before injury with a gratuitous, schmaltzy opening Christmas sequence, when it strikes us that we poor Brits are being fed American Christmas left-overs. With a 'Children's World Choir' in atten- dance, a woman dressed as a fir-tree sings, 'We must all learn from small misfortunes at the closing of the year'. What about big misfortunes, one wants to know, disasters even, in March?

Robin Williams, of Robin Williams fame, plays a 'flake', wangling around on the idiot-savant scale wherever he thinks he'll get the most laughs. At the beginning of the film his father dies, leaving an implausibly airport-like toy factory to William's uncle, (Michael Gambon), who is not a 'flake', but a violent ex-general. Gam- bon wants to convert the place to make military weapons; Williams wants to contin- ue contributing to world amusement by manufacturing fake piles of sick. Thus are the lines drawn for a conflict between good and evil.

Certain scenes from children's films of the past stick in the mind as being ineffably ridiculous. A prime example is the meat- market sequence in Oliver, where men in white overalls throw sides of beef about in formation, singing and dancing all the while. In Toys, however, we are forced to witness something worse. The factory workers shuffle and wiggle with awful, awful, embarrassing lack of enthusiasm to a song which goes, 'I love my job'; and this is before Gambon takes over! It is hard to imagine at this juncture what age the target audience can possibly have been meant to be.

This is detail. Amidst a great list of stu- pidities the most annoying is the fact that a film which is all anti-war and pro-inno- cence, ends with 20 minutes of exaggerat- ed, noisy and completely unnecessary violence. The message of Toys is supposed to be not merely that violence is a bad idea, 'I got it for watching A Year in Provence.' but specifically that recreational, pretend violence is a bad idea; and yet its entertain- ments peak with a long drawn-out battle, resulting in one and a half deaths. No child I know would benefit from seeing this work, and certainly no adult.