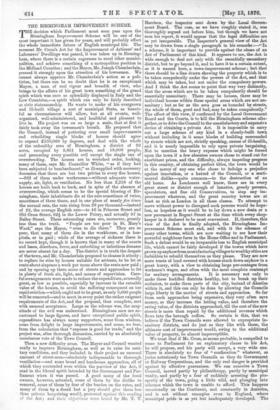 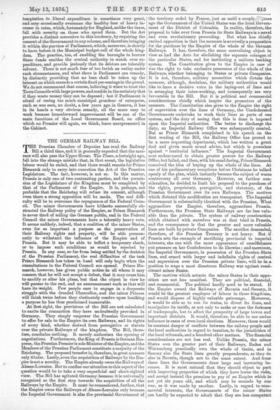 THE decision which Parliament must soon pass upon the Birmingham Improvement Scheme will be one of the most important it has given for years, and will probably affect the whole immediate future of English municipal life. The moment Mr. Cross's Act for the Improvement of Artisans' and Labourers' Dwellings was passed, it was taken up in Birming- ham, where there is a certain eagerness to excel other munici- palities, and achieve something of a metropolitan position in the Midland Counties ; and the Mayor, Mr. Joseph Chamberlain, pressed it strongly upon the attention of his townsmen. We cannot always approve Mr. Chamberlain's action as a poli- tician, but there can be no doubt that he is an exceptional Mayor, a man of real vigour and breadth of view, who brings to the affairs of his great town something of the grand spirit which was once so splendidly displayed in Italy and the Low Countries,—a spirit which can only be fairly described as civic statesmanship. He wants to make of his overgrown and ill-built village a sort of municipal State, as beauti- ful as circumstances will allow, but at all events, well- organised, well-administered, and healthful and pleasant to live in. His project was on so large a scale, that at first it fairly took away the townsmen's breath. He proposed that the Council, instead of pottering over small improvements and rebuilding single blocks of houses should agree to expend £530,000 by degrees, and deal with the whole of the unhealthy area of Birmingham, a district of 93 acres, occupied by 3,851 houses, and 18,000 people, and presenting every possible evil except the single one of overcrowding. The houses are in wretched order, looking, many of them, says Mr. Councillor White, "as if they had been subjected to bombardment;" so ill-supplied with necessary • decencies that there are but two privies to every five houses, —332 of them under workrooms—without adequate water- supply, air, light, or ventilation. No less than 2,258 of the houses are built back to back, and in spite of the absence of overcrowding, which seems to be the special blessing of Bir- mingham, their inhabitants die at the rate sometimes of twice, sometimes of three times, and in one place of nearly five times the normal rate, the rate rising from 28 per thousand—instead of 22, the average English rate—to 46 in Princess Street and Old Cross Street, 62i in the Lower Priory, and actually 97 in Bailey Street. These astounding rates are, moreover, greatly

less than the truth. People are too poor in St. Mary's Ward," says the Mayor, "even to die there." They are so poor, that many of them die in the workhouse, or in hos- pitals, or in gaol ; while of the average of sickness there is no record kept, though it is known that in many of the courts and lanes, diarrhcea, fever, and enfeebling or infectious diseases are never absent for a day. The district is in truth the despair of the town, and Mr. Chamberlain proposed to cleanse it utterly ; to replace its sties by houses suitable for artisans, to be let at rents about sixpence a week per room above the rents now paid ; and by opening up three acres of streets and approaches to let in plenty of fresh air, light, and means of supervision. Care- ful arrangements were made to reduce the expenditure, avowedly great, as low as possible, especially by increase in the rateable value of the houses, to avoid the suffering consequent on too rapid eviction—which ought not to be great, as only 9,000 people will be removed—and to meet in every point the rather exigeant requirements of the Act, and the proposal, thus complete, met with unusual acceptance. Large as the scheme was, the mag- nitude of the evil was understood. Birmingham men are ac- customed to large figures, and have exceptional public spirit, expenditure has always many supporters, some from wisdom, some from delight in large improvements, and some, we fear, from the calculation that "expense is good for trade," and the project was, after thorough discussion, carried by an absolutely unanimous vote of the Town Council.

Then a new difficulty arose. The Mayor and Council wanted really to improve Birmingham, as well as to raise its sani- tary conditions, and they included in their project an unusual amount of street-area—absolutely indispensable to thorough ventilation—and some broad and handsome approaches, all of which they contended were within the purview of the Act, if read in the libsral spirit intended by the Government and Par- liament when it was passed. A good many of the local owners, however, actuated, some of them by the dislike to removal, some of them by fear of the burden on the rates, and many of them by a dread lest a jury should give them less than private bargaining would, protested against this reading of the Act ; and their objections were heard by Mr. T. T.

Harrison, the inspector sent down by the Local Govern- ment Board. The case, as we have roughly stated it, was thoroughly argued out before him, but though we have not seen his report, it would appear that the legal difficulties are as yet insuperable. The Inspector's general view of the Act may be drawn from a single paragraph in his remarks :—" In a scheme, it is important to provide against the abuse of an Act of Parliament of this kind. It appears to me, the Act is wide enough to deal not only with the essentially unsanitary district, but to go beyond it, and to have it to a certain extent, as it is named here, a town-improvement schema; but that there should be a line drawn showing the property which is to be taken compulsorily under the powers of the Act, and that which may be taken, but not under the compulsory powers. And I think the Act seems to point that way very distinctly, that the areas which are to be taken compulsorily should be essentially unsanitary. There may be houses, there may be individual houses within these special areas which are not un- sanitary ; but as far as the area goes as bounded by streets, the whole of them, good and bad, may be taken compulsorily." The effect of this view, if confirmed by the Local Government Board and the Courts, is to kill the Birmingham scheme alto- gether, or to drive the Council to the unsatisfactory and expensive device of obtaining a private Act. It is impossible to carry out a large scheme of any kind in a closely-built town without including in it some blocks of building surrounded by streets which are not, strictly speaking, causes of ill-health, and it is nearly impossible to rely upon private bargaining. Not to mention the heavy expense which might be forced upon the town if a few absentee owners chose to stand out for exorbitant prices, and the difficulty, always impeding progress in this country, of obtaining perfect titles, the town would be at the mercy of any one who chose to indulge a prejudice against innovation, or a hatred of the Council, or a senti- mental dislike—quite common—to the destruction of an old home. As Londoners well know, there are in every great street or district enough of lunatics, greedy persons, speculators, and fine old Conservatives, to stop any im- provement whatever, and the great country towns are at least as rich as London in all these classes. To attempt to move without power to disregard such persons would be hope- less, as hopeless as it would be to lay down a new drain or a new pavement in Regent Street at the time which every shop- keeper in it declared to be most convenient. If, therefore, this view of the Act is finally adopted, the Birmingham Im- provement Scheme must end, and with it the schemes of many other towns, which are now waiting to see how their powerful neighbour fares in the Home Office and in Parliament. Such a defeat would be an irreparable loss to English municipal life, which cannot be fairly developed if the towns which have grown up anyhow from manufacturing villages to wealthy cities are forbidden to rebuild themselves as they please. They are now mere tracts of land covered with houses stuck down anyhow in a great hurry, with a view to obtaining large per-centages from workmen's wages, and often with the most complete contempt

for sanitary arrangements. It is necessary not only to make these huddled districts healthy, but to break up their seclusion, to make them parts of the city, instead of Alsatias within it, and this can only be done by allowing the Councils large liberty in the matter of streets and approaches. So far from such approaches being expensive, they very often save money, as they increase the letting value, and therefore the rating value, of the districts approached, till the cost of the new streets is more than repaid by the additional revenue which flows into the borough coffers. So certain is this, that we believe if the Town Councils were allowed to expropriate in- sanitary districts, and do just as they like with them, the ultimate cost of improvement would, owing to the additional value of property, be almost imperceptible.

We trust that if Mr. Cross, as seems probable, is compelled to come to Parliament for an explanatory clause to his Act, he will propose, and his party will accept, a very wide one. There is absolutely no fear of " confiscation " whatever, as juries notoriously tax Town Councils as they do Government or Railway Corporations, and the only real danger is provided against by effective guarantees. We can conceive a Town Council, moved partly by philanthropy, partly by municipal vanity, and partly by a fear of suddenly arresting the pro- sperity of the town, going a little wild, and plunging into schemes which the town is unable to afford. This happens occasionally on the Continent, and constantly in America, and is not without examples even in England, where municipal pride is as yet but inadequately developed. The temptation to liberal expenditure is sometimes very great, and may occasionally overcome the healthy fear of heavy in- crease in rates, which, fortunately for England, unlike the taxes, fall with severity on those who spend them. But the Act provides a distinct corrective to this tendency, by requiring the consent of the Government to any scheme, and therefore bringing it within the purview of Parliament, which, moreover, is shortly to have before it the Municipal budget-roll of the whole king- dom. The practice, too, of enabling the boroughs to borrow State funds enables the central authority to watch over ex- penditure, and provide jealously that its debtors are tolerably solvent. There is not much fear of too lavish an outlay under such circumstances, and what there is Parliament can remedy, by distinctly providing that no loan shall be taken up the interest on which exceeds a certain fixed per-centage in the pound. We do not recommend that course, believing it wiser to trust the Town Councils with large powers, and confide in the certainty that if they waste money they can be deposed ; but if Parliament is afraid of seeing too much municipal grandeur of enterprise, such as was seen, no doubt, a few years ago in Geneva, it has in its hands a very obvious remedy, all the more easy to work because henceforward improvement will be one of the main functions of the Local Government Board, an office which no Premier will again, we think, leave unrepresented in the Cabinet.