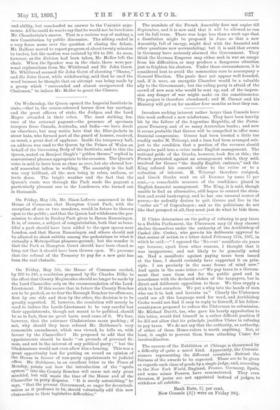 If Ulster determines on the policy of refusing to pay

taxes to a Dublin Parliament, the 'Ulstermen may (if they choose) shelter themselves under the authority of the Archbishop of Cashel (Dr. Croke), who gave-in his deliberate approval to that course of action in a letter dated February 17th, 1887, in which he said :—" I opposed the No-rent' manifesto six years ago because, apart from other reasons, I thought that it was inopportune, and not likely to be generally acted on. Had a manifesto against paying taxes been issued at the time, I should certainly have supported it on prin- ciple. I am precisely in the same frame of mind now." And again in the same letter :—" We pay taxes to a Govern- ment that uses them not for the public good and in accordance with the declared wishes of the taxpayers, but in direct and deliberate opposition to them. We thus supply a stick to beat ourselves. We put a whip into the hands of men who use it to lash and lacerate us." Clearly the Ulstermen could use all this language word for word, and Archbishop Croke would not find it easy to reply to himself, if his fellow. countrymen proposed to reduce the Ulstermen to submission. Mr. Michael Devitt, too, who gave his hearty approbation to this letter, would find himself in a rather difficult position if he did not allow that its principle justifies Ulster in refusing to pay taxes. We do not say that the authority, as authority, of either of these Home-rulers is worth anything. But, at least, it ought to prevent them from attacking Ulster for insubordination.