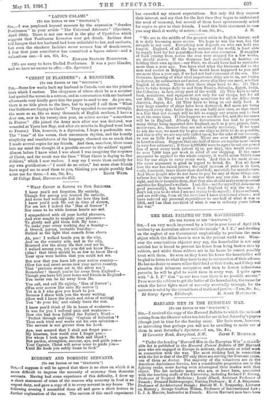 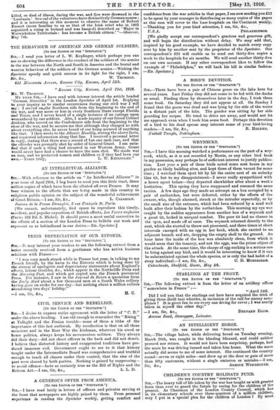 HARVARD MEN IN THE EUROPEAN WAR.

[TO TEE EDITOR OF THE " SITCTATOR."] Sin,—I received the copy of the Harvard Bulletin to which the enclosed cutting from the Observer refers too late for use in last Saturday's papers (though just in time for the Sunday ones). Tho facts seem, however, so interesting that perhaps you will not be unwilling to make use of them in next Saturday's Spectator.—I am, Sir, &o., 19 Lancaster Road, Hampstead, N.W. JADES F. MuutnEAD.

" Under the heading Harvard Men in the European War' a roiliail= able list is published in the Harvard Alumni Bulletin of 297 Harvard men who are engaged in Europe in military, diplomatic or relief work in connection with the war. The most striking fact in connection with the list is that of the 297 only three are serving the Teutonic cause, one of them as doctor. The majority of the volunteers are in the American Ambulance Service, but a considerable proportion are in the fighting ranks, some having even interrupted their studies with that object. The list includes many who are, or have been, associated with the teaching staffs of the University, including Richard P. Strong, Professor of Tropical Medicine ; Louis Allard, Assistant Professor of 'French ; Fernard Baldensperger, Visiting Professor ; E. J. A. Duquesne. Professor of Architectural Design ; Harold W. V. Temperley, Lectince on History ; George Grafton Wilson, Professor of International Law ; L. J. A. Mercier, Instructor in French. Eleven Harvard men have been killed, or died of illness, during the war, and five were drowned in the ' Lusitania.' Several of the volunteers have distinctively German names ; and it is interesting at this moment to observe the name of Robert Emmet (more familiar to us as that of the Irish rebel who in 1803 organized a rising in Ireland and was hanged) described as Major in Warwickshire Territorials : has become a British citizen.' "—Observer, May ith.