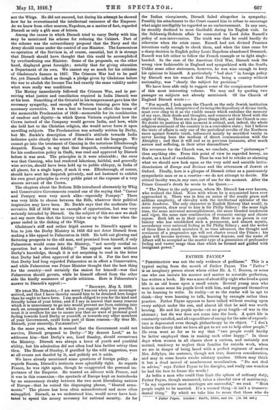 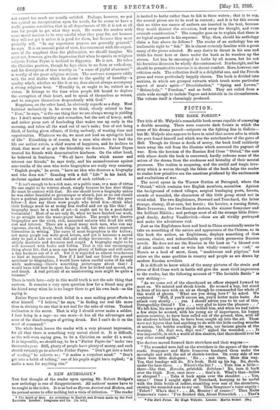 FATHER PAYNE.* " PertsenterioN was not the only evidence of

godliness." This is a typical saying from the mouth of Father Payne. The " Father " is an imaginary person about whom either Mr. A. C. Benson, or some one who can imitate his manner and matter to scientifio perfection, has written a book. He was a man of about fifty-eight who lived a quiet life in an old house upon a small estate. Several young men who were in some sense his pupils lived with him, and supposed themselves to be learning to write. In reality—or so the reader will be apt to think—they were learning to talk, learning by example rather than practice. Father Payne appears to have talked without ceasing upon every subject under the sun, and almost all that he said was worth hearing. He and his pupils spoke—at no great length—of war in the abstract ; but the war does not come into the book. A quiet life is constantly extolled, and all expenditure of energy for the sake of expendi- ture is deprecated even though philanthropy be its object. " I don't believe the theory that we have all got to set out to help other people." He even went so far as to say that " two people could hardly be better employed than in making each other happy." In these days when women in all classes show a curious, and certainly not normal, tendency to neglect their families for outside work, when we are in danger of being faced with a perfect regiment of modern Mrs. Jellybys, the sentence, though not true, deserves consideration, and may in some hearts awake salutary qualms. Others may think it but a dead morsel of anachronous moralization. " Do not deal in advice," says Father Payne to his disciples, and really one wonders he had the face to frame the words !

As befits a man who could thus limit the sphere of ordinary duty, Father Payne, though unmarried, takes a cheerful view of matrimony. " In my experience most marriages are successful," we read. " Most people ought to be married. It's a normal thing—it isn't a transcen- dental thing." By which we take him to mean that those who do • Father Payne. London: Saab, Elder, and Co. Cis. Gd. net.)

not expect too much are usually satisfied. Perhaps, however, we put too cynical an interpretation upon his words, for he seems to have a really genuine conviction that in all departments of life it is not at all rare for people to get what they want. He warns his readers with some moral unction to be very careful what they pray for, not because they will not get it unless it is good for them, but because they most probably will. " In my experience prayers are generally granted," ho says. It is an unusual point of view, less consonant with the experi- ence of the suppliant than the philosopher, we should imagine. We must not, however, give the impression that when he speaks on religious subjects Father Payne is inclined to flippancy. He is not. He takes the Christian position, though he lays claim to no form or orthodoxy, and his description of true worship as " a sense of joyful abasement " is worthy of the great religious writers. The sentence compares oddly with the real dislike which he shows to the quality of humility—a quality which, whether we like it or no, does almost always accompany a strong religious bent. " Humility is, or ought to be, extinct as a virtue. It belongs to the time when people felt bound to deplore the corruption of their heart, and to speak of themselves as worms, and to compare themselves despondently with God."

Happiness, on the other hand, he obviously regards as a duty. Most habitual melancholy is, he seems to think, closely related to fear. " Fear," he says, " is the one thing that we are always wrong in yielding to : I don't mean timidity and cowardice, but the sort of heavy, mild, and rather pious sort of foreboding that wakes one up early in the morning, and takes all the wind out of one's sails ; fear of not being liked, of having given offence, of living uselessly, of wasting time and opportunities. Whatever we do, we must not lead an apologetic kind of life." Friendship is of course, for a man who elects to lead the life our author extols, a chief source of happiness, and he inclines to think that most of us get the friendship we deserve. Father Payne treated his friends with demonstrative kindness. On the other hand, he believed in frankness. " We all have faults which amuse and interest our friends," he says truly, and his animadversions against nine-tenths of the men who write biographies are really very amusing. " English people," he avers, " have no idea who deserves a biography and who does not." Standing with a dull " Life " in his hand, he declaims against writers and readers of such rubbish:— "It isn't enough to boa rich man, or a public man, or a man of virtue No one ought to be written about, simply because he has done things He must be content with that. No one should have a biography unless he was either beautiful or picturesque or absurd, just as no one should have a -portrait painted unless he is one of the three. Now this poor fellow—I dare say there were people who loved him—think what their feelings must be at seeing him stuffed and sob up like this A biography must be a work of art—it ought not to be a post-dated testimonial ! Most of us are only fit, when we have finished our work, to go straight into the waste-paper basket. The people who deserve biographies are the vivid, rich, animated natures who lived life with zest and interest. There are a good many such men, who can say vigorous, shrewd, lively, fresh things in talk but who cannot express themselves in writing. The curse of moat biographies is the letters ; not many people can write good letters, and yet it becomes a sacred duty to pad a Life out with dull and stodgy documents ; it is all so utterly inartistic and decorous and stupid. A biography ought to be well seasoned with faults and foibles. That is the one encouraging thing about life, that .a man can have plenty of failings and still make a fine business out of it all. Yet it is regarded as almost treacherous to hint at imperfections. Now if I had had our friend the general merchant to 'biographize, I would have taken careful notes of his talk while undressing—there's something picturesque about that ! I would have told how he spent his day, how he looked and moved, ate and drank. A real portrait of an uninteresting man might be quite a treasure."

There is truth here—only in this world truth is not the sole thing that matters. It remains a very open question how far a friend may give his friend away when he is no longer there to get his own back—as the saying is.

Father Payne has not much belief in a man making great efforts to alter himself. " I believe," he says, " in finding our real life more than in sticking to one that is not real for the sake of virtue. Trained inclination is the secret. That is why I should never make a soldier. I love being in a rage—no one more—it has all the advantages and none of the disadvantages of getting drunk. But I can't do it on the word of command."

The whole book leaves the reader with a very pleasant impression, for all that there is something very unreal about it. It is difficult, as the well-worn saying goes, to be a Christian on under £1 a week. It is impossible, we should say, to be a " Father Payne-its " under two thousand a year. Still, plenty of people have plenty of money, and such should certainly go to school to Father Payne. "Don't get into a habit of reading," ho exhorts ns ; " it makes a corpulent mind." " Don't got into a habit of talking," one of his pupils might have replied; " it unfits a man for anything else."