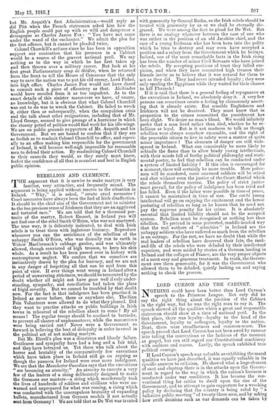 THE argument that it is unwise to make martyrs is very familiar, very attractive, and frequently sound. The argument is being applied without reserve to the situation in Ireland. " Why," it is asked, " create cruel memories ? Cruel memories have always been the fuel of Irish disaffection. It should be the chief aim of the Government not to minister to the-too precious sense of Irishmen that they are an aggrieved and tortured race." We are told that for a thousand por- traits of the martyr, Robert Emmet, in Ireland you will not find one of the rebel Smith O'Brien, who was not martyred. The true way, it is delicately indicated, to deal with Irish rebels is to treat them with inglorious leniency. Reproduce whenever you can the anticlimax of the rebellion of the unhappy Smith O'Brien, who was dismally 'run to earth in Widow MacCormacles cabbage garden, and was ultimately allowed, though convicted of high treason, to keep his skin whole. As a result he has been passed over in history with contemptuous neglect. We confess that we ourselves are instinctively drawn by the plea for leniency, and we are not in any danger of forgetting all that can be said from this point of view. If ever things went wrong in Ireland after a period of unwavering strictness, we should be tormented by the doubt whether all might not have gone well if only under- standing, sympathy, and conciliation had taken the place of frigid severity. But we cannot be troubled by that doubt now. For the fact is that indulgence has been practised in Ireland as never before, there or anywhere else. The Sinn Fein Volunteerd were allOwed to do what they pleased. Did they want to practise attacks on public buildings in Irish towns in rehearsal of the rebellion about to come ? BY all means I The regular troops should be confined to barracks, to prevent all chance of unpleasantness, while the manoeuvres were being carried out ! Never were a Government so forward in believing the best of disloyalty in order to excel in the political art of not making martyrs. But Mr. Birrell's plan was a disastrous and bloody failure. Gentleness and sympathy have had a long and a fair trial, and they have betrayed us. Yet those who talk about the horror and brutality of the comparatively few executions which have taken place in Ireland still go on arguing as though the panacea for Ireland were ever more indulgence. We see that the Manchester Guardian says that the executions " are becoming an atrocity." An atrocity to execute a very few of the leaders of a rising deliberately designed to make the Germans our madters—a rising which murderously took the lives of hundreds of soldiers and civilians who were un- warned and unprepared for what was coming, a rising which was conducted with the unscrupulous brutality of expanding bullets, manufactured from German models if not actually sent from Germany 1 We are told that as De Wet was treated with generosity by General Botha, so the Irish rebels should be treated with generosity by us or we shall be eternally dis- graced. We were among the first to plead for De Wet. But there is no analogy whatever between the case of one who was rather in the position of an old Jacobite chief, and the case of a young Irishman who has been born into the polity which he tries to destroy and may even have accepted a position and a salary from the Government which he betrays. Indeed, one of the most remarkable facts in the Irish rising has been the number of minor Civil Servants who have joined the rebels. By accepting positions of trust they lulled sus- picion, and when they have committed high treason their friends invite us to believe that it was natural for them to act as they did. They had never intended loyalty ; they were only spoiling the Egyptians while they waited for their chance to kill Pharaoh!

If it is said that there is a general feeling of repugnance at the executions in Ireland, we absolutely deny it.. A very few persons can sometimes create a feeling by clamorously' assert- ing that it already exists. But sensible Englishmen and Irishmen will not be deceived. They must know that in proportion to the crimes committed the punishment has been slight. We desire no man's blood. We would infinitely prefer that a man lived rather than died, whether he be re- bellious or loyal. But is it not madness to talk as though rebellion were always somehow excusable, and the right of the peaceable citizen to live in safety were a-matter of quite minor importance ? The elements of danger are still wide- spread in Ireland. What can conceivably be more likely to rekindle the flame than to allow heady young intellectuals, with their minds full of frothy political philosophy and senti- mental poetry, to feel that rebellion can be conducted under a system of limited liability ? If this idea is encouraged for a moment, there will certainly be more trouble. More police- men will be murdered, more unarmed soldiers will be seized and shot without even the justice of the Court-Martial which the rebels themselves receive. The policy of strict justice must prevail, for the policy of indulgence has been tried and has failed. Even if the latter were possible in time of peace, it cannot be maintained in time of war. The entete young intellectual will go on enjoying the excitement and the heroic posturing of rebellion so long as he knows that he need not pay the supreme penalty for his crime. It is absolutely essential that limited liability should not be the accepted system. Rebellion must be recognized as nothing less than rebellion. To pre tend in' some perverted, muddle-headed way that the real authors of " atrocities " in Ireland are the unhappy soldiers who have suffered so much from the rebellion is an outrage. For the rest, we have no doubt that while the real leaders of rebellion have deserved their fate, the rank- and-file of the rebels who were deluded by their intellectual superiors, and were misled by stories of a German landing in Ireland and the collapse of France, are the very proper objects of a most easy and generous treatment. In truth, the Govern- ment owe them generosity, for it was the Governnient who allowed them to be deluded, quietly looking on and saying nothing to check the process.