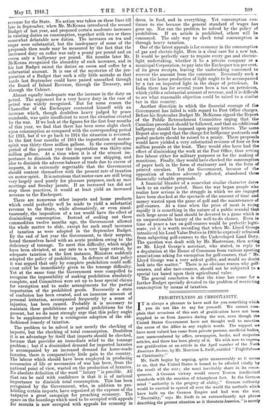 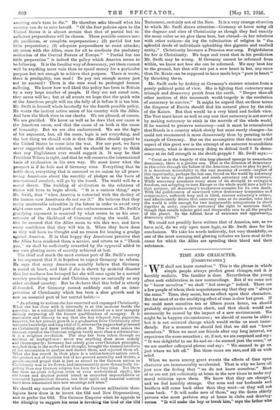 IT is always a pleasure to have said for you something which you do not like to say for yourself. We cannot com- plain that occasions of this sort of gratification have not been supplied to us from America during the war, even though the United States Government have not thought well to sanction the cause of the Allies in any explicit words. The support ws have most valued has come from private persons, unofficial bodies. men unencumbered by office, newspapers, books, and magazine articles, and there has been plenty of it. We wish now to express our gratification at an article in the April number of the North American Review, by Mr. Morrison L. Swift, entitled " Frightfulness as Christianity."

Mr. Swift begins by arguing, quite unanswerably as it seems to us, that the United States is bound to be affected vitally by the result of the war ; she must inevitably share in its conse- quences. A German victory would crown Teuton intellectual standards with the sanction of triumphant fact. In the German mind " authority is the progeny of ability." German authority would be exerted to spread all over the world the methods which have built up the German Empire and bad won the war. "Neutrality," says Mr. Swift in an extraordinarily apt phrase describing the present situation as it threatens America."is merely awaiting one's turn to die." He therefore asks himself what his country can do to save herself. " Of the four policies open to the United States it is almost certain that that of partial but in- sufficient preparedness will be chosen. These possible courses are : (1) pacificism, or complete unpreparation ; (2) partial but too little preparation ; (3) adequate preparedness to resist attacks ; (4) union with the Allies, once for all to eradicate the predatory militarism of the Central Powers of Europe." " Partial but too little preparation" is indeed the policy which America seems to be following. It is the familiar way of democracy, yet there cannot well be anything more vain than to spend money for a particular purpose but not enough to achieve that purpose. There is waste, there is prodigality, run mad I To pay out enough money just not to succeed ! There is the sure road to prolonged human suffering. We know how well liked this policy has been in Britain by a very large number of people. If they are not cured now, they never will be ; but at all events we hope that the quick wits of the American people will see the folly of it before it is too late. Mr. Swift is himself whole-heartedly for the fourth possible policy. He wants the instant active union of his country with the Allies. And here the blush rises to our cheeks. We are pleased, of course. We are gratified. We know as well as he does that our cause is the American cause, and that the cause of us both is the cause of humanity. But we are also embarrassed. We see the logic of his argument, but, all the same, logic is not everything, and the last thing we should wish is that the Allies should appeal to the United States to come into the war. For our part, we have never suggested that solution, and we should be sorry to think that any Englishman ever would suggest it. It may be that President Wilson is right, and that he will conserve the international basis of civilization in his own way. He must know what the prospect is if he fails and if Germany wins. Everything that he holds dear, everything that is assumed as an axiom by all peace- loving Americans about the sanctity of pledges as the basis of international conduct, will go by the board. The world will be a moral desert. The building of civilization in the relations of States will have to begin afresh. " It is a curious thing," says Mr. Swift, that " when America is entrusted with the destiny of the human race Americans do not see it." He believes that they invite unutterable calamities in the future in order to avoid very slight ones now. A small part of our embarrassment at Mr. Swift's gratifying argument is removed by what seems to us his over- estimate of the likelihood of Germany ruling the world. Let him be assured that the Allies mean to win this war, and have every confidence that they will win it. When they have done so they will have no thought and no reason for bearing a grudge against America. If in that happy day Americans perceive that the Allies have rendered them a service, and return us a " Thank you," we shall be sufficiently rewarded by the approval added to our own glowing sense of security achieved at last.

The chief and much the most curious part of Mr. Swift's survey Is his argument that it is hopeless to expect Germany to reform. He says that many Americans amiably believe that Germany is sound at heart, and that if she is shown by material disaster ihat her madness has betrayed her she will once again be a normal country practising moral and Christian ways as naturally as any other civilized country. But he declares that this belief is utterly ill-founded. For Germany cannot suddenly cast off an inter- pretation of Christianity which has been a slow growth and is now an essential part of her mental habit:—

" As relating to nations she has exorcised and expunged Christianity. What she has done with it internally is at this moment beside the question : as a national individual she has entered on a new savagery entirely surpassing all the former qualifications of savagery. It is inaccurate and illusory to say that she has relapsed into paganism, however, for her present growth is a graduation from Christianity after intimate knowledge and long trial of it, whereas the pagans had possessed no Christianity and knew nothing about it. This is what makes the German repeal of the Christian religion vastly more than a reformation: it is a religious revolution. The step has been taken through no accident or inadvertence : never was anything done more orderly and circumspectly: Germany has calmly gone over Christian principles, weighed them in the scales of her thought, brought the trained intellects of her universities to analyse and dissect them, and rejected them all. What she has reared in their place is a nation-toward-nation creed, the product not of tradition but of her present mentality and desires, a people-created gospel that is just as sacred to the German nation as Christianity was in its flower, and immeasurably more dynamically im- pelling than any German religion has been for a long time. Yet there has been no overt religious crisis or even ecclesiastical ripple ; the old forms and dogmaspersist intact as respected impossibilities or venerated hypothetical futures, but their spirit and essential content have been transmuted into now meanings and aims."

We should say ourselves that what the German militaristic theo-

logians have done is to invert the Old and New Dispensations, and to prefer the Old. The German Emperor when he appeals to

the Almighty to support his arras is invoking the God of the Old Testament, certainly not of the New. It is a very strange situation to which Mr. Swift draws attention—Germany at home using all the dogmas and rites of Christianity as though they had exactly the same value as we give them here, but abroad—in her relations with other nations—fin ing the culmination of religion in " the splendid deeds of individuals upbuilding this gigantic and exalted entity." Christianity becomes a Prussian war-song. Frightfulness for her is Christianity. We hope and trust that in his prediction Mr. Swift may be wrong. If Germany cannot be reformed from within, we know not how she can be reformed. We may beat her to the ground, but that will not put a new heart in her, any more than Dr. Keate can be supposed to have made boys "pure in heart" by thrashing them.

Mr. Swift ends by looking at Germany's sinister mission from a purely political point of view. ,She is fighting that autocracy may triumph and democracy perish from the earth. " Deeper than all other motives of this mammoth world-tragedy is the resolution of autocracy to survive." It might be argued that on these terms the Emperor of Russia should find his natural place by the side of the Kaiser. But that would be a very blind and foolish view. The Tsar must know as well as any one that autocracy is not served by making autocracy to stink in the nostrils of the whole world. If he wanted to preserve autocracy—and it must be remembered that Russia is a country which slowly but most surely changes—he could not recommend it more disastrously than by pointing to the example of Germany. But on the assumption that the most vital aspect of this great war is the attempt of an autocrat to annihilate democracy, what is democracy doing to defend itself ? Is demo- cracy at its full strength in the death-grapple ? Mr. Swift says :— " Great as is the tragedy of this long-planned upsurge to assassinate democracy, there is a greater one. That is the disunion of democracy in this crisis through the failure of the American nation to play its part; it is American insensibility to the vast meaning of events—neglect of this opportunity, perhaps the last one, forced on the world by autocracy itself, to take up the gauntlet and crush autocracy out of existence. While autocracy summons every atom of its strength to extinguish freedom, not scrupling to turn Europe or the whole world into a hell for that purpose, all democracy's weaknesses conspire for its own death. With tho guilelessness of unweaned virtue democracy temporizes and compromises, suffereth long and is blind, excuses autocracy's crimes, and affectionately denies that autocracy aims at its murder, cries that the world is wide enough for two inappeasable antagonisms to dwell together in unity, concedes autocracy the right to maintain itself, though that entails infinite grief and irreparable ruin to all the peoples of tho planet. In the loftiest hour of existence and opportunity, democracy shirks."

We could not possibly have written that of America, nor, as we have said, do we rely upon mere logic, as Mr. Swift does for his conclusions. We take his words indirectly, but very thankfully, as one of the most warming and glowing tributes we have read to the cause for which the Allies are spending their blood and their substance.