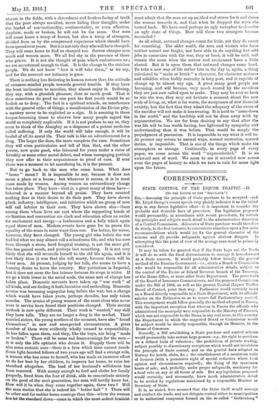 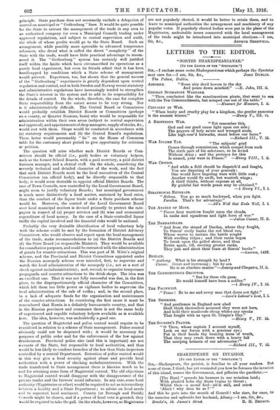 STATE CONTROL OF THE LIQUOR TRAFFIC. —IL [TO THE EDITOR OF THE "SPECTATOR."] Sra,—Assuming the principle of State purchase to bo accepted—and Mr. Lloyd George's recent speech very plainly indicates it as the initial step in any future legislative effort—it is important to consider the probable and desirable lines of procedure. The legislation proposed would presumably, in accordance with recent precedents, fix certain big principles and relegate much detail to the administrative discretion

of a Central Commission. Advocates of State purchase would therefore

do wisely, in the first instance, to concentrate attention upon a few main recommendations which would (a) fix the general character of the scheme and (b) provide safeguards against obvious dangers. In attempting this the point of view of the average man must be primarily considered.

It may be taken for granted that if the State buys out the Trade it will do so with the fixed determination to manage it henceforward as a State concern. It would probably follow broadly the general

method of the Russian Government—i.e., create a Board or Commission who would be responsible for all administrative details, subject to the control of the Excise or Inland Revenue branch of the Treasury, or the Home Office, or some other State Department. The precedents of the Board of Insurance Commissioners, and the proposed Commis:don under the Bill of 1908, as well as the present Central (Liquor Traffic) Board of Control, point that way. Parliament would certainly insist on a Board directly responsible to a State Department, with its officials' salaries on the Estimates so as to secure full Parliamentary controL This arrangement would follow generally the method adopted in Russia, with the important exception that whereas in Russia the officials who administered the monopoly were responsible to the Ministry of Finance, which was not responsible to the Duma in any real sense, in this country the Department to which the suggested Board or Commission would be subject would be directly responsible, through its Minister, to the House of Commons.

Secondly, a Bill establishing a State purchase and control scheme

would presumably take certain large powers—e.g., the right to purchase on a defined basis of valuation ; the prohibition of private trading, subject possibly to discretionary exceptions which would not invalidate the principle of State control, and on the general lines adopted in Norway for hotels, clubs, Sre. ; the establishment of a maximum ratio of licences (with a permissive right of special reduction where local opinion and circumstances required) ; the fixing of the maximum hours of sale; and, probably, under proper safeguards, machinery for a local veto on any or all forms of sale. But any legislation proposed would certainly, and necessarily, leave much administrative detail to be settled by regulations sanctioned by a responsible Minister or Secretary of State.

It is, as stated, here assumed that the State itself would manage and conduct the trade, and not delegate control either to municipalities or to authorized companies formed on the so-called " Gothenburg

principle. State purchase does not necessarily exclude a delegation of control on municipal or " Gothenburg " lines. It would be quite possible for the State to entrust the management of the trade in any area to an authorized company (or even a Municipal Council) trading under approved regulations, and subject to central supervision and audit, the whole of whose profits would go to the State Board. Such an arrangement, while possibly more agreeable to advanced temperance reformers, who dread what is called the direct " complicity " of the State with the trade, would have little practical advantage to recom- mend it. The " Gothenburg " system has certainly well justified itself within the limits which have circumscribed its operations as a purely local experiment, but even its friends admit that it has been handicapped by conditions which a State scheme of management would prevent. Experience, too, has shown that the general success of the " Gothenburg " experiments is greatly dependent upon central regulation and control, and in both Sweden and Norway recent statutory and administrative regulations have increasingly tended to strengthen the State's interest in the system and to add to its responsibility for the details of controL On the whole, therefore, the case for complete State responsibility from the outset seems to be very strong. Nor is it administratively difficult. The Central Board or Commission would probably establish District Boards or Committees (perhaps on a county, or Quarter Sessions, basis) who would be responsible for administration within their own areas (subject to central supervision and approval), and appointments of shop managers, supply of stocks, &e., would rest with them. Shops would be conducted in accordance with (a) statutory requirements and (b) the Central Board's regulations. These latter would presumably " lie " on the House of Commons table for the customary short period to give opportunity for criticism or petition.

The question will arise whether such District Boards or Com- mittees should be official (i.e., paid) bodies or voluntary helpers, such as the former School Boards, with a paid secretary, a paid district business manager, and a clerical staff. On the whole, considering the severely technical and detailed character of the work, and the fact that such District Boards must be the local executives of the Central Commission (an official body), and be directly responsible to that body, it would seem desirable to appoint official District Boards. The case of Town Councils, now controlled by the Local Government Board, might seem to justify voluntary Boards ; but municipal government is much more distinctively a local matter, sustained by local rates, than the conduct of the liquor trade under a State purchase scheme would be. Moreover, the control of the Local Government Board over local municipal matters is devised primarily to protect the rate- payers in respect of (a) proper services and (b) wise and economical expenditure of local money. In the case of a State-controlled liquor traffic the capital involved and the financial risks would be nationaL Probably the very desirable identification of local voluntary help with the scheme could be met by the formation of District Advisory Committees, who would observe and report upon the local management of the trade, make recommendations to (a) the District Boards and (6) the State Board (or responsible Minister). They would be available for consultative purposes, and could be entrusted with the administration of grants for counter-attractions. This was part of M. Witte's original scheme, and the Provincial and District Committees appointed under the Russian monopoly scheme were intended, first, to supervise and watch the local administration of the monopoly (i.e., act as a sort of check against maladministration); and, second, to organize temperance propaganda and counter-attractions to the drink-shops. The idea was an excellent one. That it was not fully successful was due, in the first place, to the disproportionately official character of the Committees, which left them too little power as vigilance bodies to supervise the local administration of the sale of vodka ; and, in the second place, to a lack of adequate funds for the organization and maintenance of the counter-attractions. In considering the first cause it must be remembered that Russia is a definitely bureaucratic country, and that in the Russian provinces and communes there is not the same body of experienced and capable voluntary helpers available as is available here. The idea, however, was undoubtedly a good one.

The question of Magisterial and police control would require to be considered in relation to a scheme of State management. Police control obviously could not be dispensed with ; it would be necessary for purposes of public order and for the enforcement of the law against drunkenness. Provincial police also (and this is important) are not servants of the State, but responsible to local authorities, and thus would be less likely to condone breaches of the law than State inspectors controlled by a central Department. Retention of police control would in this way give a local security against abuse and provide local authorities with a power of checking maladministration. With the trade transferred to State management there is likewise much to be said for retaining some form of Magisterial control. The old objections to Magisterial control would disappear with the disappearance of the private trader and the brewers' social influence. In any case, some local authority (Magistrates or other) would be required to act as intermediary between a locality and a State Department ; to advise on local needs and to represent local sentiment. County (or Borough and Parish) C&ancils might be chosen, and if a power of local veto is granted, they would be required to take the poll. On the whole, however, as Magistrates are not popularly elected, it would be better to retain them, and to leave to municipal authorities the arrangement and machinery of any popular votes. If popularly elected bodies were put in the place of the Magistrates, undesirable issues connected with the local management of the trade might be introduced into municipal elections.—I am,