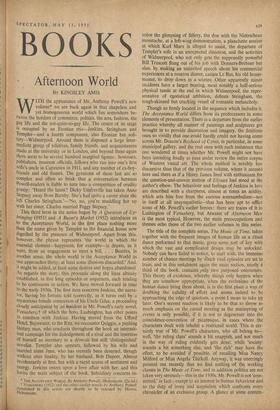 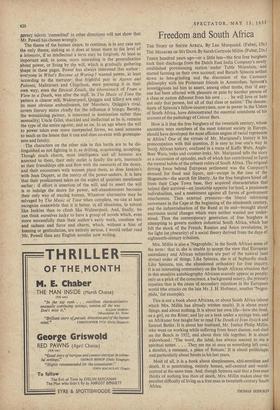 By KINGSLEY AMIS ITH the appearance of Mr. Anthony Powell's new volume!' we are back again in that shapeless and yet homogeneous world which lies somewhere be- tween the borders of commerce, politics, the arts, fashion, the gay life and the not-quite-so-gay life. The centre of its stage is occupied by an Etonian trio—Jenkins, Stringham and Templer—and a fourth component, also Etonian but soli- tary—Widmerpool. Around them is disposed a large inter- mediate group of relatives, family friends, and acquaintances made at the university or in London, and beyond these•again there seem to be several hundred marginal figures : hostesses, publishers, museum officials, fellows who ran into one's first wife's uncle in Capetown in 1911, and any number of ex-boy- friends and old flames. The gyrations of these last are so Complex and often so brisk that a conversation between Powell-readers is liable to turn into a competition of erudite gossip : 'Heard the latest? Dicky Umfraville has taken Anne Stepney away from Barnby. She's had quite a career since she left Charles Stringham.'—'No, no, you're muddling her up with her sister. Charles married Peggy Stepney.'

This third term in the series begun by A Question of Up- bringing (1951) and A Buyer's Market (1952) introduces us to the Acceptance World, in the first place nothing more than the name giVen by Templer to the financial house now dignified by the presence of Widmerpool. Apart from this, however, the phrase represents 'the world in which the essential element—happiness, for example—is drawn, as it were, from an engagement to meet a bill. . . . Besides,' in another sense, the whole world is the Acceptance World as one approaches thirty; at least some illusions discarded.' And, it might be added, at least some desires and hopes abandoned. As regards the story. this proceeds along the lines already established, in live long episodes or sequences, each tending to be continuous in action. We have moved forward in time to, the early 1930s. The first item concerns Jenkins. the narra- tor, having his fortune told (correctly. as it turns out) by a mysterious female connection of his Uncle Giles; a proceeding Closely anticipated by an +neident in Mr. Powell's early novel, Venusberg,t of which the hero, Lushington, has other points in common with Jenkins. Having moved from the Ufford Hotel, Bayswater, to the Ritz,' we encounter Quiggin, a pushing literary man, who conducts throughout the book an intermit- tent campaign for the dislodgement of a rival and the insertion of himself as secretary to a demode but still 'distinguished' novelist. Templer also appears, followed by his wife and married sister Jean, who has recently been deserted, though without utter finality, by her husband, Bob Duport. Almost involuntarily at first, but with a rapid access of sentiment and energy, Jenkins enters upon a love affair with her, and this volve the glimpsing of Sillery, the don with the Nietzschean moustache, at a left-wing demonstration, a planchette session at which Karl Marx is alleged to assist, the departure of Templer's wife in an unexpected direction, and the activities of Widmerpool, who not only gets the supposedly powerful Bill Truscott flung out of his job with Donners-Brebner but also, by making an uninvited speech about his commercial experiences at a reunion dinner, causes Le Bas, his old house- master, to drop down in a seizure. Other apparently minor incidents have a larger bearing, most notably a half-serious physical tussle at the end in which Widmerpool, the repre- sentative of egotistical ainbition, defeats Stringham, the tough-skinned but cracking vessel of romantic melancholy.

Though so firmly located in the sequence which includes it, The Acceptance World differs from its predecessors in some elements of presentation. There is a departure from the earlier practice whereby all manner of paintings and sculptures got brought in to provide decoration' and imagery, the fictitious ones so vividly that one could hardly credit not having come across Mr. Deacon's Boyhood of Cyrus, in particular, in some municipal gallery, and the real ones with such insistence that one wondered at times whether Mr. Powell might not have been intending finally to pass under review the entire corpus of Western visual art. The whole method is notably less discursive than that of the previous volume, where it seemed here and there. as if a Henry James fired with enthusiasm for the question-and-answer section of Ulysses had stood at the author's elbow. The behaviour and feelings of Jenkins in love are described with a sharpness, almost at times an acidity. which sets him free from the curious somnambulism—not in itself at all unsympathetic—that has been apt to afflict some of Mr. Powell's earlier. heroes : there are traces of it in Lushington of Venusberg, but Atwater of Afternoon Men is the most typical. However, the main preoccupations and themes echo those of the two earlier volumes in this series.

The title of the complete series, The Music of Time, taken together with the frequent images of human life as a ritual dance performed to that music, gives some sort of key with which the vast and complicated design may be unlocked. Nobody can have failed to notice, to start with. the immense number of chance meetings by Which vital episodes are set in train, and in this instalment again the main section, nearly a third of the book, contains pnly two purposed encounters. This theory of existence, whereby things only happen when they are somehow appropriate, when the evolutions of • the human dance bring them about, is in the first place a way of doubting the validity of effort and seems indeed to be approaching the edge of quietism, a point I mean to take up later. One's second reaction is likely to be that to throw so much emphasis on the casual meeting as the mainspring of events is only possible, if it is not to degenerate into the coincidence-convention of picaresque. in cases where the characters dealt with inhabit a restricted world. This is cer- tainly true of Mr. Powell's chal.acters, who all belong to— well, 'the ruling class' sounds a bit snappish, and not much in the way of ruling evidently gets done; while 'society' sounds a bit something, else, and 'the rich' may have the effect, to be avoided if possible, of recalling. Miss Nancy Mitford or Miss Angela Thirkell. Anyway, it Was unerringly pointed out recently that we find nothing 'of the working classes in The Music of Time, and in addition politics are not taken very seriously—this in the 1930s. Mr. Powell is not 'com- mitted,' in fact—except to an interest in human behaviour and to the duty of irony and scepticism which confronts every chronicler of an exclusive group. A glance at some content-

pprary talents 'committed' in other directions will not show that Mr. Powell has chosen wrongly.

The theme of the human dance, to continue, is in any case not the only theme, sinking as it does at times more to the level of a leitmotiv, if so intellectual a term may be forgiven. At least as important and, to some, more interesting is the generalisation about power, or living by the will, which is gradually gathering shape in these pages. Power has always interested this author: everyone in What's Become of Waring ? wanted power, at least according to the narrator; that frightful pair in Agents and Patients, Maltravers and Chipchase, were pursuing it in their own way; even the farcical Zouch, the iibermensch of From a View to a Death, was after the stigf. In The Music of Time the pattern is clearer still. Widmerpool, Quiggin and Sillery are only its most obvious embodiments, for Members, Quiggin's rival, covets literary status chiefly for the influence it brings; Barnby, the womanising painter, is interested in domination rather than sensuality Uncle Giles, shackled and ineffectual as he is, remains the type of the entire egotist; and so on. In an age where the will to power takes ever more unexpected forms, we need, someone to teach us the lesson that it can and does co-exist with grotesque- ness and fatuity.

The characters on the other side in this battle are to be dis- tinguished as not fighting in, it, as drifting, acquiescing, accepting. Though much charm, most intelligence and all humour are annexed to them, their only outlet is finally the arts, inasmuch as their friendships ebb and flow with the measures of the dance, and their encounters with women place them, as does Jenkins's with Jean Duport, at the mercy. of the power-seekers. It is here that their predicament takes on the aspect of quietism mentioned earlier: if effort is assertion of the will, and to assert the will is to indulge the desire for power, self-abandonment becomes their only way of staying human. Whatever alternative may be salvaged by The Music of Time when complete, we can at least recognise meanwhile that it is better, in all situations, to submit like Jenkins than to climb like Widmerpool. And, finally, we can think ourselves lucky to have a group of novels which, even more successfully than their author's early work, combine wit and sadness and farce and charm, which, without a hint of keening or gesticulation, are entirely serious. I would rather read Mr. Powell than any English novelist now writing.