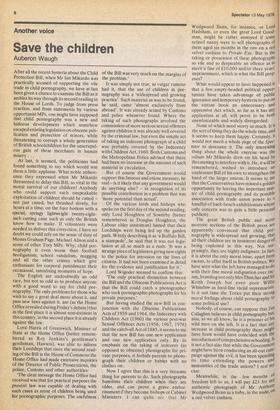 After all the recent hysteria about the Child Protection Bill, when Mr Ian Mikardo was practically accused of supporting the vile trade in child pornography, we have at last been given a chance to examine the Bill as it ambles its way through its second reading in the House of Lords. To judge from press reaction, and from statements by various opportunist MPs, one might have supposed that child pornography was a new and hideous development which somehow escaped existing legislation on obscene publication and protection of minors, while threatening to corrupt a whole generation of British schoolchildren for the unscrupulous gain of these merchants in human misery . . .

At last, it seemed, the politicians had found something to say which would win them a little applause. What noble abhorrence they expressed when Mr Mikardo threatened to delay this Bill, so vital to the moral survival of our children! Anybody who could support such unspeakable exploitation of children should be caned — not just caned, but thrashed slowly, for hours at a time, on the bare bottom with a special, springy lightweight twenty-eightinch cutting cane such as only the British know how to make. If volunteers were needed to deliver this correction, I have no doubt we could rely on the sense of duty of Messrs Graham Page, Michael Alison and a score of other Tory MPs. Why, child pornography is even worse than football hooliganism, school vandalism, mugging and all the other crimes which give enthusiasts for corporal punishment their occasional, tantalising moments of hope.

The English are undoubtedly an odd race, but not so odd as to produce anyone with a good word to say for child pornography. The only problems for those who wish to say a great deal more about it, and pass new laws against it, are (as the Home Office revealed during Friday's debate) that in the first place it is almost non-existent in this country, in the second place it is already against the law.

Lord Harris of Greenwich, Minister of State at the Home Office (better remembered as Roy Jenkins's gentleman's gentleman, Hawwis), was able to inform their Lordships that since the second reading of the Bill in the House of Commons the Home Office had made extensive inquiries of the Director of Public Prosecutions, the police, Customs and other authorities: 'The clear message the Home Office had received was that for practical purposes the present law was capable of dealing with such cases as arose of children being used for pornographic purposes. The usefulness of the Bill was very much on the margins of the problem.'

It was simply not true, as vulgar rumour had it, that the use of children in pornography was a 'widespread and growing practice'. Such material as was to be found, he said, came 'almost exclusively from abroad'. It was already seized by Customs and police whenever found. Where the taking of such photographs involved the commission of more serious sexual offences against children it was already well covered by the criminal law, but even the simple act of taking an indecent photograph of a child was probably covered by the Indecency with Children Act, 1960. Both Customs and the Metropolitan Police advised that there had been no increase in the amount of such material in circulation.

But of course the Government would support this fatuous and otiose measure, he said — is it likely that any government would do anything else? — in recognition of its possible contribution in a problem that was 'more potential than actual'.

Of the various lords and. bishops who spoke on the first day of the second reading, only Lord Houghton of Sowerby (better remembered as Douglas Houghton, the Labour elder statesman) hinted that their Lordships were being led up the garden path. Wittily describing it as 'a Buffalo Bill, a stampede', he said that it was not legislation at all so much as a rush: 'It was a strange piece of legislation giving new rights to the police for intrusion on the lives of citizens. It had not been examined in detail for the evidence and justification for it.'

Lord Wigoder seemed to confirm this: 'The only practical distinction between the Bill and the Obscene Publications Act is that the Bill could catch a photographer who took pornographic photographs for his private purposes.'

But having studied the new Bill in conjunction with the Obscene Publications Acts of 1959 and 1964, the Indecency with Children Act (1960) the various post-war Sexual Offences Acts (1956, 1967, 1976) and the catch-all Act of 1885, it seems to me that the new Bill has one new application and one new, application only. By its emphasis on the taking of indecent (as opposed to obscene) photographs for private purposes, it forbids parents to photograph their children or babies with no clothes on.

Now I agree that this is a very tiresome thing for parents to do. Such photographs humiliate their children when they are older, and can prove a grave embarrassment if they become bishops or Cabinet . Ministers. I can quite see that Mr Wedgwood Benn, for instance, or Lord Hailsham, or even the great Lord Good man, might be rather annoyed if some retired nanny were to sell photographs of them aged six months in the raw on a red

velvet cushion to Private Eye. But is the

taking or possession of these photographs so vile and so despicable an offence as to merit a fine of £10,000 and/or three years imprisonment, which is what the Bill pror oses?

What would appear to have happened is that a few empty-headed political oppor tunists have taken advantage of public ignorance and temporary hysteria to put on the statute book an unnecessary and oppressive Act which, so far as it has any application at all, will prove to be both unenforceable and widely disregarded.

None of which need worry us much. It is the sort of thing they do the whole time, and it seems to keep them happy. Certainly, it would not merit a whole page of the Spectator to denounce it. The only interesting thing about the whole exercise was the odium Mr Mikardo drew on his head bY threatening to interfere with it. He, it will be remembered, wished to introduce all unpleasant Bill of his own to strengthen the hand of the larger unions. It seems to ine that the Conservatives have missed a golden opportunity by leaving the important matter of child pornography and its possible association with trade union power to a handful of back-bench exhibitionists whose only concern was to gain a little personal publicity. The great British public and more moronic sections of the British press are apparently convinced that child pornography is widespread and growing, that all their children are in imminent danger of being exploited in this way. Not surprisingly, they are highly indignant. In fact, it is about the only moral issue, apart frost) racism, to offer itself in British politics. We have seen what the left have managed to do with their fine moral indignation over racy ism, branding not only Mrs Thatcher and Sir Keith Joseph but even poor Willie Whitelaw as hard-line racial supremacists. Is it not time the Tories put their strong moral feelings about child pornography to some political use? Nobody, of course, can suppose that Jill' Callaghan believes in child pornography but, alas, as we all know, he is a prisoner of his wild men on the left. It is a fact that anY increase in child pornography there might have been would have coincided with the introduction of comprehensive schooling is it not a fact also that while the Government might have been conducting an all-out carry paign against the evil, it has been spendin,g its time extending the powers aou immunities of the trade unions? I rest MY case. of Meanwhile, in the few months freedom left to us, I will pay £25 for anY authentic photograph of Mr AnthorlY Wedgwood Benn as a baby, in the nude, 0° a red velvet cushion.