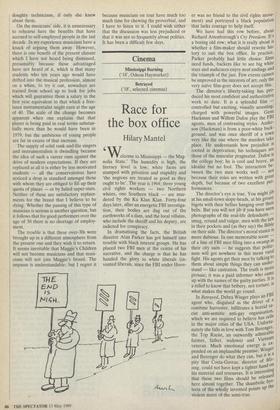 Race for the box office

Welcome to Mississippi — the Mag- nolia State.' The humidity is high, the literacy level is low; white faces are stamped with privation and stupidity and `the negroes are treated as good as they ought to be'. The year is 1964; three young civil rights workers — two Northern whites, one Southern black — are mur- dered by the Ku Klux Klan. Forty-four days later, after an energetic FBI investiga- tion, their bodies are dug out of the earthworks of a dam, and the local villains, who include the sheriff and his deputy, are indicted for conspiracy.

In dramatising the facts, the British director Alan Parker has got himself into trouble with black interest groups. He has placed two FBI men at the centre of his narrative, and the charge is that he has handed the glory to white liberals (in- vented liberals, since the FBI under Hoov- er was no friend to the civil rights move- ment) and portrayed a black population that lacks courage to help itself.

We have had this row before, about Richard Attenborough's Cry Freedom. It's a boring old row; what it is really about is whether a film-maker should rewrite his- tory to suit the box office. In practice, Parker probably had little choice: films need funds, backers like to see big white stars and audiences enjoy neat endings and the triumph of the just. Few events cannot be improved in the interests of art; only the very naive film-goer does not accept this.

The director's liberty-taking has pro- duced his most confident and authoritative work to date. It is a splendid film — controlled but exciting, visually arresting, charged with powerful images. Gene Hackman and Willem Dafoe play the FBI agents, men of contrasting styles. Ander- son (Hackman) is from a poor-white back- ground, and was once sheriff of a town very like the one where the murders take place. He understands how prejudice is rooted in deprivation; his techniques are those of the muscular pragmatist. Dafoe is the college boy; he is cool and brave, an idealist but no fool. The interaction be- tween the two men works well —not because their roles are written with great depth, but because of two excellent per- formances. The director's eye is true. You might jib at his small-town slope-heads, at his greasy bigots with their bellies hanging over their belts. But you will not jib if you have seen photographs of the real-life defendants — smug, rotund and vulgar, men with the law in their pockets and (as they say) the Bible on their side. The director's moral stance is more dubious. In one memorable scene -- of a line of FBI men filing into a swamp in their city suits — he suggests that polite- ness will get nowhere in this mean rural fight. His agents get their men by talking to them about simple things they can under- stand — like castration. The truth is more prosaic; it was a paid informer who carne up with the names of the guilty parties. It is a relief to know that bribery, not torture, is what makes the world go round. In Betrayed, Debra Winger plays an FBI agent who, disguised as the driver of a combine harvester, infiltrates a horrid ra- cist anti-semitic anti-gay organisation, which we are required to believe has cells in the major cities of the USA. Unfortu- nately she falls in love with Tom Berenger, the Top Racist, an outwardly admirable farmer, father, widower and Vietnam veteran. Much emotional energy is ex- pended on an implausible premise; Winger and Berenger do what they can, but it is a pity that Costa-Gavras, director of Mis- sing, could not have kept a tighter hand on his material and resources. It is interesting that these two films should be released here almost together. The shambolic hys- teria of the wholly invented points up the violent merit of the semi-true.