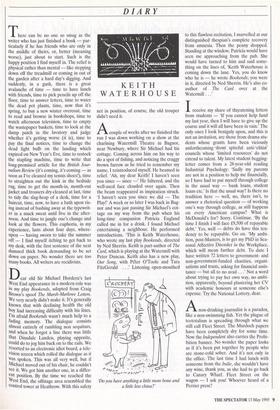 There can be no one so smug as the writer who has just finished a book — par- ticularly if he has friends who are only in the middle of theirs, or, better (meaning worse), just about to start. Such is the happy position I find myself in. The relief is physical rather than mental — like stepping down off the treadmill or coming in out of the garden after a hard day's digging. And suddenly, in a gush, there is a great avalanche of time — time to have lunch with friends, time to pick pencils up off the floor, time to answer letters, time to water the dead pot plants, time, now that it's spring, to buy a new winter overcoat, time to read and browse in bookshops, time to watch afternoon television, time to empty the wastepaper baskets, time to look at the damp patch in the lavatory and judge whether it's getting worse (it is), time to pay the final notices, time to change the dead light bulb on the landing which expired on New Year's Eve, time to restock' the stapling machine, time to write that long-promised article for the British Jour- nalism Review (it's coming, it's coming — as soon as I've cleaned my tennis shoes!), time to straighten out the kink in the bedside rug, time to get the month-in, month-out Jacket and trousers dry-cleaned at last, time to tidy the slag-heap of a desk, time for a haircut, time, now, to have a bath upon ris- ing instead of bashing away at the typewrit- er in a muck sweat until five in the after- noon. And time to jangle one's change and look at the flowers. This euphoria, in my experience, lasts about four days, where- upon — having sworn to take the summer off — I find myself itching to get back to my desk, with the first sentence of the next damned thick book demanding to be set down on paper. No wonder there are too many books. All writers are recidivists.

Dear old Sir Michael Hordern's last West End appearance in a modern role was in my play Bookends, adapted from Craig Brown's spoof The Marsh-Marlowe Letters. We very nearly didn't make it. It's generally known that with declining health the old boy had increasing difficulty with his lines. I'm afraid Bookends wasn't much help to a fading memory. The dialogue consists almost entirely of rambling non sequiturs, and when he forgot a line there was little that Dinsdale Landen, playing opposite, could do to jog him back on to the rails. We resorted to an electronic idiot board, a tele- vision screen which rolled the dialogue as it was spoken. This was all very well, but if Michael moved out of his chair, he couldn't see it. We got him another one, in a differ- ent position. By the time we reached the West End, the offstage area resembled the control tower at Heathrow. With this safety net in position, of course, the old trouper didn't need it.

Acouple of weeks after we finished the run I was down working on a show at the charining Watermill Theatre in Bagnor, near Newbury, where Sir Michael had his cottage. Coming across him on his way to do a spot of fishing, and noticing the craggy brown furrow as he tried to remember my name, I reintroduced myself. He beamed in relief. `Ah, my dear Keith! I haven't seen you since — since —' He faltered, and the well-used face clouded over again. Then the beam reappeared as inspiration struck. `I haven't seen you since we did — The Play!' A week or so later I was back in Bag- nor and was just passing Sir Michael's cot- tage on my way from the pub when his long-time companion Patricia England called me in for a drink. I found Michael entertaining a neighbour. He performed introductions. 'This is Keith Waterhouse, who wrote my last play Bookends, directed by Ned Sherrin. Keith is part-author of The Card, which is playing at the Watermill with Peter Duncan. Keith also has a new play, Our Song, with Peter O'Toole and Tara FitzGerald . . .' Listening open-mouthed `Do you have anything a little more bone and a little less china?' to this flawless recitation, I marvelled at our distinguished thespian's complete recovery from amnesia. Then the penny dropped. Standing at the window, Patricia would have seen me approaching from the pub. She would have turned to him and said some- thing on the lines of, 'Keith Waterhouse is coming down the lane. Yes, you do know who he is — he wrote Bookends; you were in it, directed by Ned Sherrin. He's also co- author of The Card over at the Watermill Ireceive my share of threatening letters from students — 'If you cannot help fund my last year, then I will have to give up the course and it will all have been in vain.' The only ones I look benignly upon, and this is not an invitation, are those from drama stu- dents whose grants have been viciously unforthcoming Nfrom" spiteful anti-`elitist' councils whose 'limited resources' do not extend to talent. My latest student begging- letter comes from a 28-year-old reading Industrial Psychology: 'Sadly my parents are not in a position to help me financially, so I have had to put myself through college in the usual way — bank loans, student loans etc.' Is that the usual way? Is there no tradition here — well, no, there isn't, to answer a rhetorical question — of working one's way through college, as still happens on every American campus? What is McDonald's for? Sorry. Continue. 'By the time I finish I will face £9,500 of repayable debt.' Yes, well — debts do have this ten- dency to be repayable. Go on. 'My ambi- tion, post-Masters, is to get my PhD in Sea- sonal Affective Disorder in the Workplace, which will mean further debt. To date I have written 72 letters to government- and non-government-funded charities, organi- sations and trusts, asking for financial assis- tance — but all to no avail . . .' Not a word about trying to pay her own way, no ambi- tion, apparently, beyond plastering her CV with academic honours at someone else's expense. Try the National Lottery, dear.

Anon-drinking journalist is a paradox, like a non-swimming fish. Yet the plague of teetotalism is spreading through what we still call Fleet Street. The Murdoch papers have been completely dry for some time. Now the Independent also carries the Prohi- bition banner. No wonder the paper looks as if it's been put together by people who are stone-cold sober. And it's not only in the office. The last time I had lunch with someone from the Indie, she wouldn't have any wine, thank you, as she had to go back to Canary Wharf. Fleet Street on the wagon — I ask you! Whoever heard of a Perrier press?