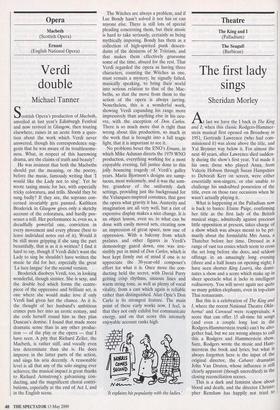 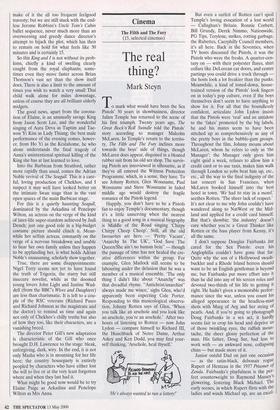 The King and I (Palladium) The Seagull (Barbican)

At last we have the I back in The King and I; when this classic Rodgers-Hammer- stein musical first opened on Broadway in 1951, Gertrude Lawrence (who had com- missioned it) was alone above the title, and Yul Brynner way below it. For almost the next 40 years, after Lawrence died sudden- ly during the show's first year, Yul made it his own; those who played Anna, from Valerie Hobson through Susan Hampshire to Deborah Kerr on screen, were either essentially non-singers, or else unable to challenge his undoubted possession of the title, even on those rare occasions when he wasn't actually playing it.

What is happening at the Palladium now is back to basics: Elaine Paige, confirming her title as the first lady of the British musical stage, admittedly against precious little opposition at present, takes charge of a show which was always meant to be pri- marily about the formidable Mrs Anna, a Thatcher before her time. Dressed in a range of vast tea cosies which seem to cross the set long before she does, and seldom offstage in an amazingly long evening (three and a half hours on opening night; I have seen shorter King Lears), she domi- nates a show and a score which make up in sheer spectacle what it lacks in intelligent rediscovery. You will never again see quite so many golden elephants, even in top-class Thai restaurants.

But this is a celebration of The King and I, where the recent National Theatre Okla- homa! and Carousal were reappraisals; a score that can offer 15 all-time hit songs (and even a couple long lost in the Rodgers-Hammerstein trunk) can't be alto- gether bad, but we are wrong always to call this a Rodgers and Hammerstein show. Sure, Rodgers wrote the music and Ham- merstein the book and lyrics; but what Is always forgotten here is the input of the original director, the Cabaret dramatist John Van Druten, whose influence is still clearly apparent (though uncredited) in the closing reconciliation scenes. This is a dark and feminist show about blood and death, and the director Christo- pher Renshaw has happily not tried to make of it the all too frequent feelgood travesty; but we are still stuck with the end- less Jerome Robbins's Uncle Tom's Cabin ballet sequence, never much more than an overweening and greedy dance director's attempt to hijack the plot, which has then to remain on hold for what feels like 30 minutes and is certainly 15.

So this King and I is not without its prob- lems, chiefly a kind of swelling clearly caught from the royal elephants; some- times even they move faster across Brian Thomson's vast set than the show itself does. There is also a limit to the amount of times you wish to watch a very small Thai child walk alone for miles downstage, unless of course they are all brilliant elderly midgets.

The good news, apart from the corona- tion of Elaine, is an unusually savage King from Jason Scott Lee, and the wonderful singing of Aura Deva as Tuptim and Tae- won Yi Kim as Lady Thiang; the best male performance of the evening comes, howev- er, from Ho Yi as the Kralahome, he who alone understands the final tragedy of Anna's unintentional spiritual killing of the King she has at last learned to love.

Into the Barbican from Stratford, rather more rapidly than usual, comes the Adrian Noble revival of The Seagull. This is a care- ful, loving production of Chekhov, and I suspect it may well have looked better on the intimate Swan stage than in the vast open spaces of the main Barbican stage.

For this is a quietly haunting Seagull, dominated by the Arkadina of Penelope Wilton, an actress on the verge of the kind of later-life super-stardom achieved by Judi Dench; just one good role in a big-budget costume picture should clinch it. Mean- while her selfish actress, constantly on the verge of a nervous breakdown and unable to hear her own family unless they happen to be applauding her, is what holds Adrian Noble's unassuming, scholarly show together.

True, there are some disappointments: Nigel Terry seems not yet to have found the truth of Trigorin, the starry but still insecure novelist, while as the doomed young lovers John Light and Justine Wad- dell (from the BBC's Wives and Daughters) are less than charismatic. It is left to a cou- ple of the RSC veterans (Richard Pasco and Richard Johnson as the magistrate and the doctor) to remind us time and again not only of Chekhov's chilly truths but also of how they too, like their characters, are a vanishing breed.

The director Peter Gill's new adaptation is characteristic of the Gill who once brought D.H. Lawrence to the stage: bleak, unforgiving, dark, wiry. In the end, it is not only Masha who is in mourning for her life here; the country houseparty is entirely peopled by characters who have either lost the will to live or at the very least forgotten where and when they last had, it.

What might be good now would be to try Elaine Paige as Arkadina and Penelope Wilton as Mrs Anna.