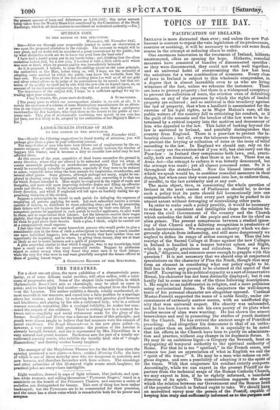 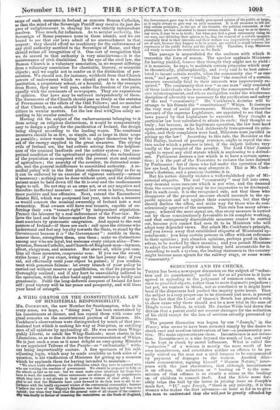 IRELAND is more distracted than ever and unless the new Pai- liament is content to repeat the vain legislation of its predecessors, coercive or soothing, it will be necessary to strike out some fresh course in the attempt at reducing chaos to order. , One enormous innovation in the treatment of Ireland, hitherto unattempted, offers an opening for hope. Hitherto, remedial measures have consisted of bundles of disconnected specifics : as they were disconnected, they could not work well together; and an universal habit of compromising the law has been the substitute for a true combination of measures. Every class

of laws in Ireland is subject to this wholesale compromise, in a degree that is almost incredible even to us who are living. witnesses of the fact, unless we rehearse the instances. There are laws to protect property ; but there is a widespread conspiracy to prevent the collection of rents, the eviction even of defaulting- tenants, or any of the processes by which the rights of landed property are enforced ; and so universal is this treachery against the law of property, that when a landlord is assassinated for the exercise of his legal rights, as in Major Mahon's case, all the public writers of the country fall to criticizing his conduct, as if the guilt of the assassin and the breaker of the law were to be de- termined by a critical inquiry into the motives and demeanour of him who appealed to the law. This habit of looking beyond the law is universal in Ireland, and painfully distinguishes that country from England. There is a poor-law to protect the la- bouring classes ; but all, even the labourers themselves, conspire to prevent the levying or collection of rates or the issue of relief according to the law. In England we should say, rely on the law—carry out the eviction-law if you will, but also carry out the Poor-law : in Ireland they compromise both laws' and, practi- cally, both are frustrated, so that there is no law. There was an Arms Act—the attempt to enforce it was bitterly denounced, but the attempt was made • yet all classes possessed arms. So it is throughout the statute-book. Now the blessed innovation of which we speak would be, to combine remedial measures in their design, but when ()ace they were passed into law, to enforce them, if needful, to the last extremity and at any cost.

The main object, then, in considering the whole question of Ireland in the next session of Parliament should be, to devise such a policy that its parts should fall harmoniously into one comprehensive whole, so that every part might be pushed to its utmost extent without deranging or neutralizing other parts.