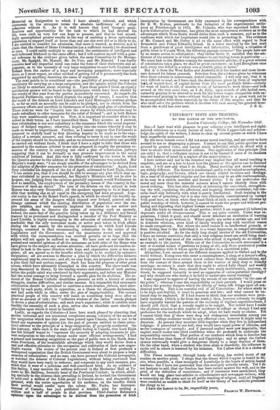 SIR—I have read with pleasure in your columns some intelligent and right- minded criticisms on a recent lecture of mine. While I appreciate and acknow- ledge the spirit of the writers, I desire to clear up several points on which I NMI been imperfectly understood.

By the term minute cares I did not mean moral teaching, and am sorry to have seemed to use so disparaging a phrase. I meant to say that public systems must proceed by general rules, and cannot study individual minds in detail with view to secure their symmetrical culture. One application of this principle (but one only) is, that a collegiate system is not to be blamed if some of its student* lose the balance of mind by a neglect of the moral sciences.

I have neither said nor in the remotest way implied that all moral teaching is mephitic; and am at a loss to know how the phrase or the opinion can be fastened on me. I will now add what I do think. .Moral teaching and moral training are widely different. The former is intellectual; and is to be valued as metaphysics, logic, geography, and history, which are closely related to ethics and theology. As a man of ill-regulated impulse and low desires may be an able mathematician, so he may be a subtile moralist and learned divine. I do not undervalue the moral any more than the material sciences when I cannot identify them with moral training. This last aims directly at informing the conscience, strengthen- ing the will, regulating the affections, and inspiring devout sentiment; but con- cerns itself only Indirectly with what is purely intellectual. Such training is the proper end of preaching; but it is also very effectually communicated by contact with good men, at times when they least think of such a result; and likewise by public worship; of which, however, it cannot be made the proper end without pro- faning and degrading that highest human occupation. • And this leads to remark on chapel service; which I am supposed ([believe) to deprecate under all circumstances. This is not suite correct. Under wise re- gulations, I think it good, and should never felicitate an institution of learning on being forced to go without it. Where pupils are under a certain age, and live in domestic relations, some kind of family worship may with excellent reason be made compulsory. But where the mind resists it on intellectual grounds, or from feeling that to the individual it is a weary hypocrisy, to compel attendance is positive mischief. As for the daily long chapel service of the old Universities, I have an intense conviction that only a very religious heartcan avoid being dead- ened by it; and that most of the seniors who attend it regularly do so chiefly. as an example to the juniors. While out of the Universities no such ceremonial is a test or essential means of goodness to young or old, only those academical youths will sympathize with it whose spirits are broken to a sacerdotal yoke. Altogether, I am amazed at the different measure applied to Oxford and to the

world without. Young men who enter a countinghouse, a shop, or a lawyer's offiA are supposed to receive a certain moral culture from Sunday ministration; and from the contact of those around them in the routine of daily duty or friendly meetings: no outcry is made that they ought to attend daily chapel and weekly divinity lectures.- Why, then, should those who study mathematics, anatomy, or Greek, be supposed instantly to need an apparatus of extra-parochial theology? and why should one who denies it be held to undervalue moral training?

I am stpposed to approve of leaving the morals of our students "to the care of the police ; whereas I cast the responsibility on their parents. I would press on a father the peculiar dangers which the liberty of being idle brings upon all aca- demical youths. This is an essential evil of all Universities: for where study is to be high and fruitful, it must be generous and free; and what cannot be en- forced may be neglected. If I had reason to think that our students were pecu- liarly immoral, (which is far from the truth,) the; however solemnly we might have originally warned the parents of the necessity of vigilant superintendence, I should still think that a remedy ought to be sought. Nor indeed have I =de the slightest allusion to this matter of residence in college as though I had any preference for the methods which we adopt, when we have really no choice. Yet I cannot think that if there were deep and widespread immorality among our students, college residence would be any effectual cure, however it might tend to decorum. At present they associate little together when they live in independent lodgings: if assembled in one hall, they would have equal power of idleness, and worse contagion of example; and if parental neglect were now imputable, that neglect would mount into blind confidence when we professed to undertake the responsibility ourselves. That portion of our students which lives in families has far less freedom than those of Oxford and Cambridge; and to adopt the Oxford system universally would give a dangerous liberty to a large fraction of them. On the other hand, when a student who lives alone is disorderly, his influence to excite evil in others is lessened by his isolation. Yet I allow that it is a choice of difficulties. The Times newspaper, through baste of writing, has misled many of my readers on another point. I allege that the theory which I oppose is bound to de- sire when possible, a close monopoly of knowledge in the hands of article-bound teachers: but I have not pretended that this monopoly actually exists. Yet I do not hesitate to add, that our freedom has been earned against the will, and to the grief, of the defenders of restrictions; and if resistance were annihilated, they would ere long place test-articles on schoolmasters and newspaper-writers, with a censorship on the press and on all public teaching of religion, until all England were rendered as unable to think for itself as the theory of teat-articles presumes the clergy to be.

I have the honour to be, Sir, respectfully yours, FRANCIS W. Nswicsir.