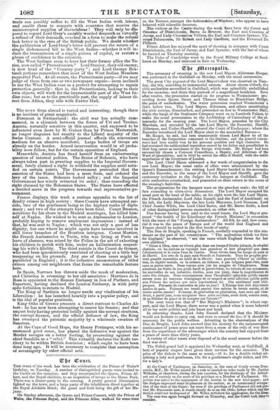 Page 2, 13 November 1847 — The news from abroad is varied and interesting, though there
Close

The news from abroad is varied and interesting, though there

is no incident of great magnitude. Foremost is Switzerland : the civil war has actually com- menced, in a skirmish between the forces of 'Uri and Tessino. Austria, naturally sensitive in this quarter, and supposed to be influenced even more by M. Guizot than by Prince Metternich, no longer disguises her enmity to the Liberal majority of the Swiss Cantons, A semi-official journal affords the convenient medium for an abusive manifesto. Large bodies of troops are already on the border. Armed intervention would in all proba- bility soon follow, but for the certain opposition of England.

Meanwhile, Austria has freed herself from an embarrassing question of internal politics. The States of Bohemia, who have always taken part in granting supplies to the Imperial Govern- ment, lately claimed a right to withhold the supplies until satis- fied on certain points. The Government pretended that the sanction of the States had been a mere form, and ordered the levy of the taxes. Bohemia looked sulky ; and the Imperial Government has wisely retracted its order ; thus conceding the right claimed by the Bohemian States. The States have effected it decided move in the progress towards real representative go- vernment.

France displays this week a curious appendix to the list of deadly crimes in high society : three Counts have attempted sui- eide, two of the gentlemen being in the highest ranks of diplo- Macy; and two of the attempts have been fatal. Count Bresson, notorious for his share in the Madrid marriages, has killed him- self at Naples. He wished to be sent as Ambassador to London, probably hoping to remove unpleasant impressions : instead of that, he was sent to Naples ; which was not only a. post of less dignity, but one where he might again have become involved in- still lower branches of the Bourbon intrigues. Count Mortier, the French Ambassador to Turin, who was living at Paris on leave of absence, was seized by the Police in the act of exhorting his children to perish with him, under an hallucination respect- ing his wife's fidelity. The third suicide is the Count de Gomer, who had been ignominiously convicted of shooting at a little boy trespassing on his grounds. Any one of these cases might be

paralleled n England ; it is the collective enumeration of titled crimes among our neighbours that forms the remarkable feature here.

In Spain, Narvaez has thrown aside the mask of moderation, and Christina is returning to her old associates : Martinez de la Rosa is appointed to the Roman Embassy in lieu of Pacheco, and Espartero, having declined the London Embassy, is with petty spite forbidden to return to Madrid. The King of Sardinia no longer needs any vindication of his Liberalism : he has launched heartily into a popular policy, and is the idol of- popular gratitude. King Otho of Greece presents a direct contrast to Charles Al- bert : he has now been attempting to coerce his Senate; and that august bodyhaving protested boldly against the corrupt elections, the corrupt finance, and the official defiance of law, the King has swamped the patriotic majority by a wholesale creation of Senators.

At the Cape of Good Hope, Sir Henry Pottinger, with his ac- customed good sense, has placed the defensive war against the Border savages on a better footing, by proceedino. against the chief Sandilla as a "rebel." This virtually declares the Kafir ter- ritory to be within British dominion ; which ought to have been done long ago. It will be necessary to complete that assumption of sovereignty by other official acts.