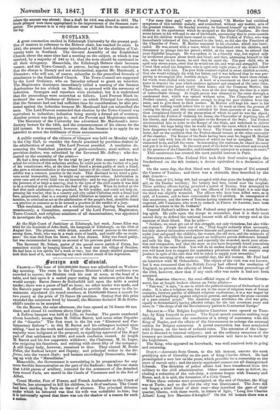 A great commotion excited in Edinburgh University by the present posi- tion of matters in reference to the Hebrew chair, has reached its crisis. In 1845, the present Lord-Advocate introduced a bill for the abolition of Uni- versity tests in Scotland. The General Assembly of the Established Church about the same time had a meeting on the subject, at which it was resolved, by a majority of 246 to 11, that the tests should be continued in all their stringency. Meanwhile, the Edinburgh Hebrew chair becomes vacant; and the Town-Council, as patron, having come to the conclusion that the charge is literary and not ecclesiastical, appoint Mr. Macdouall, a Dissenter; who will not, of course, subscribe to the prescribed formula of attachment to the Established Church. The Town-Council are supported by the Lord Ordinary, who on Saturday refused to grant an interdict. The Magistrates thereupon immediately called a meeting of the Senatus Academicus for ten o'clock on Monday, to proceed with the ceremony of induction. Strangers and reporters were excluded; but it is understood that the proceedings were somewhat as follows. Lord Provost Black in- troduced the new Professor of Hebrew: on which Principal Lee objected, that the Senators had not had sufficient time for consideration; he also pro- tested against the induction because Mr. Macdouall had not subscribed the tests. The Lord Provost contended that election by the Town-Council was equivalent to induction; induction being merely a formal act of courtesy. Another protest was then put in; and the Provost and Magistrates retired.

The Secretary of the University has advertised Mr. Macdouall's intro- ductory lecture for the 19th, and the commencement of his classes for the 22d instant. It is rumoured, however, that the Senatus is to apply for an interdict to arrest the fulfilment of these announcements.

A public meeting of the citizens of Glasgow was held on Monday night in the City Hall, to consider the frauds practised by provision-dealers in' the adulteration of meal. The Lord Provost presided. A resolution de- nouncing the fraudulent practices of grain-merchants, meal-millers, and provision-dealers, was submitted by the Reverend Mr. Jeffrey; who des- canted on the enormity of the crime—

He had a deep admiration for the trial by jury of this country; and were he asked for evidence of this nefarious artifice, he could point to the verdict of a jury of his countrymen, who, at the time they found a person guilty of such a fraud, also gave a recommendation to the utmost leniency of the court, because that such artifice was a common practice in the trade. That disclosed to his mind a grie- vous social immorality, nay, he might say an extensive crime. Adulteration in every case and of every kind was an immorality: and he was glad to add here, in the presence of so large a meeting, that in the eyes of the civil courts it was held to be a criminal act to adulterate the food of the people. When he looked at the fact that such adulteration was practised, he felt wonder, and could not help ex- pressing his wonder, that in a country and city called Christian such a fraud had been perpetrated; that in a country called Christian so immoral an act as adul- teration, so criminal an act as the adulteration of the people's food, should be found —a practice so common as to be termed a practice in the verdict of a jury. This resolution, and others of a similar tendency, having been carried unanimously, a Committee, composed of the Lord Provost, Magistrates, Town-Council, and religious ministers of all denominations, was appointed to investigate the subject.

At the High Court of Justiciary at Edinburgh, last week, James Edey Was tried for the homicide of John Scott, the hangman of Edinburgh, on the 12th of August last. The prisoner, while drunk, assailed several persons in the street; among them, Scott, who was in a weak state of health, and could ofthr no resist- ance: the man died from the blows, not from disease. Edey was found guilty, but was recommended to mercy on account of his previous good character.

The Reverend Mr. Nelson, pastor of the guoad sacra parish of Patna, has committed suicide by hanging himself, in a wood near the village of Straiten. Ile had been in low spirits for a week or two; but the simple-minded peasantry took little heed of it, not expecting any such violent result of his depression.