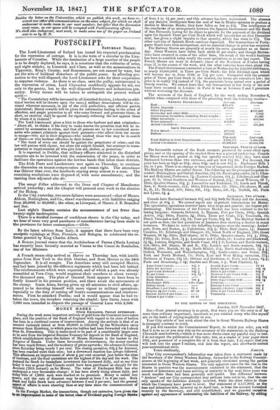 The Lord-Lieutenant of Ireland has issued his expected proclamation for the repression of outrage. It is in the form of a circular to the Lieu- tenants of Counties. While the destitution of a large number of the people is .0 be deeply deplored, he says, it is notorious that the robberies of arms, and night attacks, in Limerick and Clare, as well as the assassinations in Tipperary, King's County, and Roscommon are not caused by want, but are the acts of habitual disturbers of the pulslic.peace. In affording pro- tection to the well-disposed, the Lord-Lieutenant asks for their cooperation to suppress violence. As there is no class, save the guilty, uninterested in the repression of crime, Lord Clarendon confidently appeals for aid, not only to the gentry, but to the well-disposed farmers and industrious pea- santty. Every means will be taken to extinguish the present wicked spirit-

" The Constabulary will be increased in all disturbed districts, (whereby an addi- tional burden will be thrown upon the rates,) military detachments will be sta- tioned wherever necessary, in aid of the civil authorities, and efficient patrols maintained; liberal rewards will be given for information leading to the arrest of offenders, and ample protection to all who come forward and prosecute them; in short, no exertion shall be spared for rigorously enforcing the law against those by whom it is violated? The Lord-Lieutenant gives a hint to those who harbour and abet criminals— "Above all, he thinks it his duty to make known the penalties that will be in- curred by accessories to crime, and that all persons are by law considered acces- sories who protect criminals against their pursuers—who afford them the means to escape—who aid in their disguise—who mislead those who may be in search of them—or who harbour offenders in their houses."

"The hand of every one should be against the perpetrater of crime; and the law will pursue with rigour, not alone the culprit himself; but sentence to trans- portation or imprisonment all who give him aid, shelter, or protection."

It is reported in Dublin, that military officers stationed in the disturbed counties are to be invested with the commission of the peace, in order to lacilitate the operations against the lawless bands that infest those districts.

The Irish Peers and Landowners met again on Thursday, to continue the discussion on tenant-conapensation and tenant-right. The attendance was thinner than ever, the landlords staying away almost to a man. The remaining resolutions were disposed of, with some amendments; and the meeting then adjoured sine die.