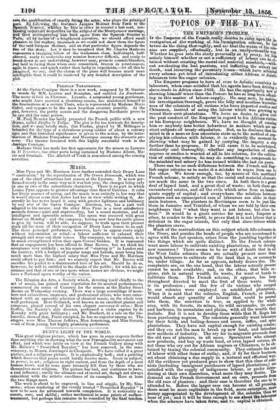 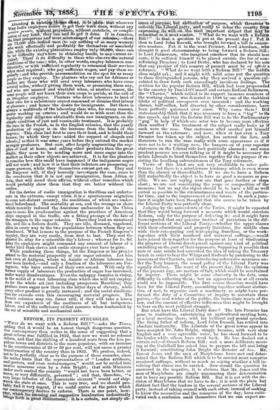 Much of the contradiction on this subject which fills columns in the Times, and puzzles the heads of people who are accustomed to agree with the last speaker, arises from the jumbling together Of two things whioh are quite distinct. Do the French colonies want more labour to cultivate existing plantations, or to develop new resources ? There seems to be no sort of doubt that in all the West India colonies there are actually present more than enough labourers to cultivate all the land that is, or assumes to be, under tillage. As far as appears, nobody denies this. The complaints are, on the one hand, that the labour actually present cannot be made available ; and, on the other, that wide re- gions, rich in natural wealth, lie waste, for -want of hands to cultivate them. The French scheme, it appears, has been throughout directed to meet the first of these wants. Such is its profession ; and the few of its victims who escaped to our colonies were employed on established plantation. When it is said that the colonies, English, French, or Dutch, would absorb any quantity of labour that could be poured into them, the arisertion is true, as applied to the whole area, with its forests, its mines, its wild savannahs, its coasts and harbours, its mountains and plains, with all the wealth they include. But it is not to develop these wilds that M. Regis has been purchasing negroes. The colonists generally want labourers for their fields and boiling-houses and cocoa, coffee, and spice plantations. They have not capital enough for existing estates; and they are not the men to break up new land, and introduce new methods of industry. The cry for immigrants proceeds from the old race of planters, in all cases.' Speculators who atteniPt new products, and buy up waste land, or even lapsed estates, are not those who cry out for African negroes or Chinamen, to be ob- tained by taxing the colonial community. They estimate the cost of labour with other items of outlay, and, if fit for their business, set about obtaining a due supply in a 'natural and effectual way. All the evidence vet produced goes to show that this class of colo- nists (including immigrant purchasers of lapsed plantations,) are satisfied with the supply Of indigenous labour, or prefer intro- ducing at their own discretion, what more they may desire. TUe demand on the French Government and on ours, proceeds fresh the old race of_planters : and their case is therefore the one to be attended to. Before the larger case can become at all pressing, there must be more capitalists in the field, more enterprise, more money appropriated to the development of the colonies than We hear of yet; and it will be time enough to see about the labour when the schemes have taken form, and VI capital is obtained. Attending ifq (4444644 4301416( OA wherever west India employers desire to get their wade done, Without any

od/elf; and•WWO-PrnVide neoommoddtion on the spot forias many people as they employ., The planters who err out for 'Africans. or coolies are theie Who will .send. avSay labonrers • who have come• several miles;vithoist "givinetheiii 'work, or promising 'lemony, and who 'ale amazed and Wi4thf41l' When' at anther season,. the same people will not leave theiteUwn bropa to *risk at the call Of en irregular emploVer: - Planters- who drive labourers. to land of '

at pleasute ; and ' lienot, ithe • -desire for imihigranta • But there is eleniya a multitude, Of the labouring class who7 for many reasana prefer working i on ,estateS ; 4ncrwould do -so eisithmore thanthe regularity Mid diligence obtainable from rawinimigrants, . on the simple condition of'j net arictieasenable treatment. Itiaprobahly the case in the Frenolytts,in. the English &denies, that thelyearly production of sugar. nVori the increase from the lands of • the mgroes. This class had first to earn their land, and to build their: houses, (to which theyshaVe added the support 'of chapels: and schools,) SO that it wee ravine-years before they:entered.the market &singer prodhe.ets.. Buts now i after largely. augmenting) them sup- plies °Hoed ' at' home, sellingeother„.producti thim{thengreat age,' they Seem to bees Sending :more :and mond, sugar iatosthe Market. as their other objects, arisonhiaired. - It isier the planters to consider how this could. have happened if the indigennus, negro- will not work ; and how it is that that inferiors are prospering as sugar-growers,-while they .themeelves,eannot.get on. They and the Emperor' will, ifethey honestls investigate the case come to the ..conclusion that, it-dia.-110V any; immigration, from :Utica, Or Asia, that will mend. 'their affairs' witlunit other. remedies which would probably shbw them that-they are better without the

For the device of 'coolie immigration is thriftless and unfortu- nate in the extreme, 'except when_ itissi spontaneous migration to some not-distant country, the Conditions of which_ are under- deed beforehand. The mortality it seas and the wrongs on shore which recently induced the American ambassador in the China seas to issue his proclamation against the practices of American ships engaged in the traffic, are a fitting presage of the fate of the strangers in the sugar colonies. There they lead an unnatural life, and die a forlorn death. They are idle, diseased, vagabond, alien in every way to the two populations between whom they are introduced. 'What is more to the purpose of the French Emperor's inquiry, they are very costly, from first to last. They cost the planter 2s. aday for a miserable day's labour ; whereas for Is. 6d. &lay the employers might command any amount of labour of a better kind than slaves and coolie strangers ever have to give. While pondering these things, let the Emperor or his proxies attend to the material prosperity of our sugar colonies. Let him look even at Antigua, where no Asiatic or African labourer has ever been landed,—and only a. fraction of the labourers are Por- tuguese, who have entered of their own accord. With only the former supply of labourers the production of sugar has increased, ander many disadvantages. Even the unhappy Jamaica is rising, in the midst of a vast labouring class which she will not employ. As for the whole set (not including prosperous Mauritius) they Produce more sugar now than in the latter days of slavery, while every other product is greatly increased ; and the social ameliora- tion far exceeds even this encouraging material progress. The French colonies may rise faster still if they will take a lesson from our experience .of the costliness of LI but indigenous- labour, and of the sufficiency of that resource when husbanded by the use of scientific and moll • al aids. BIM