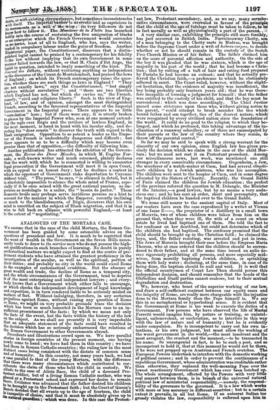 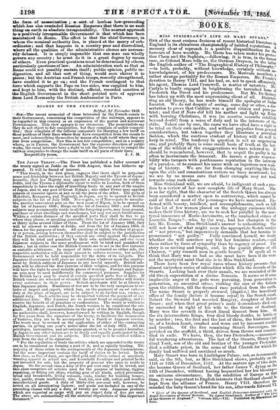 ANALOGUES OF THE MORTARA CASE.

WE assume that in the case of the child Mortara, the Roman Go- vernment has been guided by some ostensible advice on the questions of precedent and law. It is much to be regretted that the want of wealth in the Government on the Seven Hills neces- sarily tends to draw to its service men who do not possess the high- est qualifications in such branches of learning. No doubt in purely ecclesiastical matters we might expect to find at the centre of pre- ferment students who have attained the greatest proficiency in the investigation of the secular, as well as the spiritual, portion of their duties ; and probably no city in the world could excel Rome in the examples of ecclesiastical. erudition. But the absence of great wealth and trade the decline of Rome as a temporal city, and the whole circumstances of the Government, tend to deprive it of the most enterprising and independent lawyers ; and every- body knows that a Government which either tails to encourage, or which checks the independent development of legal knowledge and exposition, is in turn rendered liable to be seriously misled on matters of fact. Without indulging, therefore, in any sectarian Prejudices against Rome, without raising any question of Rome as Rome, we might on very probable grounds trace the decision which has been so much lamented in the Mortara case to an in- sufficient presentment of the facts ; by which we mean not only the facts of the event, but the facts within the history of the law on the subject. As we shall see presently it is very improbable that an adequate statement of the facts could have resulted in the decision which has so seriously embarrassed the relations of the Roman Government to other Governments abroad. Precedents and illustrations crowd upon us. We have parallel stories in foreign countries at the present moment, one having nearly come to hand ; we have had them in this country ; we have had them in Roman Catholic countries ; the ruling law m the most distinct eases being consistent with the dictate of common sense and of humanity. In this country, not many years back, we had a ease parallel to that of the young Mortara, with the difference that there were many circumstances which contributed to cor- r9.borate the claim of those who held the child in custody. We allude to the ease of Alicia Race the child of a deceased. Pro- testant soldier, but of a living Liman Catholic mother, who was d at a Protestant school and expressed her desire to remain eve. Evidence was advanced that the father desired his children le be brought up in the Protestant faith ; but the Court of Queen's !Be?icli decided that all events up to the age of fourteen, the child .1...incapable of choice, and that it must be absolutely given up to natural guardian.; whiela WM done: In this case the Protest- ant law, Protestant _ascendency, and, as we say, many corrobo- rative circumstances, ;Were overruled in fevour of the prioiiplet that the child at the age of tytelage must be taken to follow, to in fact morally. as well as phyOologically a part of the parent. •t 11' A very Similar case exhibiting the principle still more forcibly, has just occurred in, British India. Narrainsawmy Chetty, son of a man belonging to the Chetty caste in Madras, was brought before the Supreme Court under a writ of habeas corpus, to decide whether or not he should remain in the custody of the Scotch Free Church Mission or of his father. The father claimed him on the score of parental affection and authority. On the side of the boy it was pleaded that he was sixteen, which is the age of majority in his part of the world ; that he had become a aria- tian ; that by cutting off a tuft of hair and eating food prepared by Pariahs he had become an outcast ; and. that he actually pre- ferred the Christian faith,-a preference to which he obstinately adhered in court. The Court ruled, however, without the slight- est hesitation that the evidence of majority was insufficient, the boy being probably only fourteen years old ; that he was there- fore incapable of forming a judgment for himself ; that the father was entitled to the custody of has child, and that the boy must be surrendered : which was done accordingly. The Chief Justioe passed some strictures upon those who, without giving notice to the parent, "could attempt to break asunder the ties which bound father and son together, ties of the dearest nature..whichf were recognized by every civilized nation since the foundation'of the world. It could do no good to the religion to which they be- longed, and which he professed, this taking advantage of the ink clination of a runaway schoolboy, or of those not emancipated by their parents or the law of the country where they reside., to throw off the parental controL" So far we may be said to speak with a strong warrant for the sincerity of our own opinion, since English law has given pre- cisely the decision whick.we claim in the case of the child_Mor- tare ; but we need not rest it on Protestant precedent. Among our miscellaneous news, last week, was mentioned one still stronger in every conceivable circumstance. Gugenheim, a Jew, the murderer of a watch-maker at Caen, had had several illegiti- mate children by a Jewish mistress, who was his accomplice. The children were sent to the hospice at Caen, and in some degree educated by the Sisters of Charity. Recently, the Grand Rabbi of Paris claimed the children for Jewish education' the prefect of the province referred the question to M. Delangle, theMinister of the Interior,-a good lawyer, but by no means a very auda- cious one ; and he has sent an older, short and peremptory, that the baptised children be handed over to the Grand Rabbi.

We Come still nearer to the ancient capital of Italy. Most of our readers have seen the case reproduced by a writer at Vienna of one Isaac Z—, the proprietor of a distillery in a small town of Moravia, two of whose children were taken from him on the ground that, when they were ill, the wife of a count on whose estate he lived had baptised one of them. She told the fact to her confessor on her deathbed, but could not determine which of the children she had baptised. The confessor promised that the child should be brought up in the Christian faith ; he claimed the boys, and, the father resisting, was arrested and put in irons. The Jews of Moravia brought their case before the Empress Maria Theresa who at once ordered that the children should be surren- dered to : their father, and at the same time issued an aulic de- cree rigorously prohibiting all persons, and. more especially mid- wives, from secretly baptising Jewish children, or sprinkling them with holy water ; declaring, at the same time, in case of its being done, the baptism should be null and void. It is well that the official oountpmen of Count Leo Than should .peruse this independent decision and should remember that the heads of the Ghibelline and Guelf parties cannot coalesce, but to their mutual degradation and destruction.

We, however, who boast of the superior working of our law, and draw a self-sufficient contrast between our equity eases and the iniquity of Rome, are really more chargeable with the injustice done to the Mortara family than the Pope himself is. We say this in no metaphorical or 'hyperbolical sense. It is evident that the Government at Rome is too weak to execute the duties of a Government. Few persons who have observed the life of Mesta! Ferretti would imagine him, by nature or training, so unintel- ligent, unbenevolent, or unchristian, as to interfere in this way with the law of nature and of humanity ; but he is evidently under compulsion. He is incompetent to carry out his own in- tentions, or his own judgment, but must allow the working of

the worst government n the world,---the most insolvent and the most arrogant, the cruelest and the meanest,-to be transacted in his name. So uncongenial in fact, is he to such a post, and so incompetent to hold it, that at this moment he would not be there, if he were not propped up on Austrian and French crutches. The European Powers undertook to interfere with the domestic working of political causes ; and in order to prevent the continuance of a republican Government, whose administration was creditable rather than otherwise, they replaced the well-meaning Pope over the lowest reactionary Government which has ever been 'botched up. The whole arrangement, effected by the Powers with very littk real concert between them, is in breach of the universal natural political law of ministerial responsibility ,-namely, the responsi- bility of the governors to the governed. It is a law which works with more or less accuracy in different countries; but to a certain extent it prevails, in all but Rome. If an autocrat Sultan too grossly violates the law, responsibility is enforced upon him in the foam of assassination ;-ssiedrt. of lavileini law-proceeding Whiehdias also reminded Miamian Emperors that there is no such thingswearth as absolute iereaponsibility. The nearest approach teniupositively irresponsible Government is that which has been "anaintained in Rome. The effect is that the chief Governor, in *horn the .nominal authority lies, is placed at the mercy of sub- ordinates ; and that happens in a country poor and discredited, where all the qualities of the administrative classes are neeessa- lily debased. 1tis simply impossible that one man can wholly governeny country; he must do it in a great degree by means of others. Even practical questions must be determined by others, particularly questions of law. An administration such as that at Rome could not possibly sustain itself; public opinion, publio in- dignation, and all that sort of thing, would soon shiver it to pieces ; but the Austrian and French troops, recently strengthened, have enabled it to go on; and the French contingent to that force which supports the Pepe on two sides, was supplied to him, And. kept to him, with the distinct, official, recorded sanction of the English Government in the short pointed note of approval hem Lori ormanby the British Ambassador in Paris.