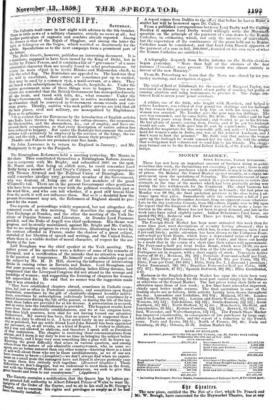 The Calcutta ntail-came in last night with advises to the 9th October. Tame is little news of a military character, strictly no news at all ; but

ther particulars of captures and combats already reported. Among fur

the former is that of the Rajah of Shaghur, and among the latter the Selimpor on the Gogra, which resulted so disastrously for the fight at

063. speouhtions as to the next campaign form a prominent part of the letters'

The Delhi &melte, however, publishes an interesting document. It is a nmeifesto, supposed to have been issued by the King of Delhi, but in reality by Prince Feroze, and it contains a list of " grievances" of a more substantial character than are usually found in rebel proclamations. Of course its main object is to invite Hindoo and Mahomedan chiefs, to

the rebel flag. The Zemindars are appealed to. The land-tax they are told is exorbitant, their estates are sometimes put up to auction, they may be sued by a common ryot, a maid-servant, or a slave. They are taxed with subscriptions for roads, schools, hospitals, &c. Under the wive government none of these things were to happen. Then mer- chants are reminded that the British Government has monopolised nearly all the trade, and taxed with tolls, Sm., what remains ? "Under the • Jung's Government, trade shall be open to native merchants and their merchandise shall be conveyed in Government steam-vessels and car- riage gratis. Thirdly, natives who seek public service are told that all the best places, civil and military, are monopolized by Englishmen. Then as to artisans— It is evident that the Europeans by the introduction of English articles into India have thrown the weavers, the cotton-dressers, the carpenters, the blacksmiths, and the shoemakers, &c., out of employ, and have en- grossed their occupations, so that every description of native artisan has been reduced to beggaia.. But under the Badshahi Government the native artisans will exclusively be employed in the services of the kings, the ra- jafis;and the rich; and this will no doubt insure their prosperity.

Sir John Lawrence is to return to England in January ; and Mr. Montgomery is to go to the Punjaub.

The Birmingham Reformers held a meeting yesterday, Mr. Thmtz in the chair: They constituted themselves a Birmingham Reform Associa- tion to cooperate with Mr. Bright; and subscribed 3001. on the spot. Mr. Muntz said, that being an oldish man, be could remember Lord Derby being a member of Lord Grey's Cabinet, and in correspondence with Thomas Attwood and the 'Political Union of Birmingham. He ebuld remember another vory _prominent member of the Government, who was desirous of being one of the last members of the great O'Connell's tail. There are in the present Government other gentlemen who have been accustomed to veer with the political weathercock just as the wind blew, and who can_ tell whether, if a good stiff breeze blow from the north it will not influence them. But as it is doubtful how the present Government may act, the Reformers of England should be pre- pared for the worst.

Two reports of prciceedings widely separated, but not altogether dis- connected reach us this morning. One describes the opening of the Corn Exchange at Dundee, and the other the meeting of the York In- stitute of Popular Science and Literature. At Dundee Lord Panmure presided, and the Duke of Argyll was chief spokesman. His theme was progress, and he stoutly maintained, against Mr. Bright and Mr. Carlyle, that we are making progress in every direction, illustrating his views by Clic contrast afforded in France under the shadow of a great eclipse, curtailed of her liberties of speech and writing, and the United States, 'where there is a visible decline of moral character, of respect for the au- thority of the law.

Lord Brougham was the chief speaker at the York meeting. The salient points of his speeches were a defence of some of his remarks at Liverpool, and a rectification of the mistake that no attention was paid to the question of temperance. He himself read an admirable paper on the subject by Mr. M. D. Hill, showing the influence of intoxicating drinks in causing crime in Bavaria and Baden. Lord Brougham said that sonic persons on the continent, including ladies filling thrones, had complained that the Liverpool Congress did not attend to the wrongs and hardships of women ; and suggesting the forming of chapters for women left unpmvided for. He said that no sooner was the suggestion made than it was attended to. "They have established chapters abroad, sometimes in Catholic coun- tries, but just as often in Protestant countries and sometimes upon Royal foundation, sometimes by the gift of charitably-disposed humbler indivi- duals, sometimes by subscriptions judiciously levied; and sometimes by a kindof insurance during the life of the parent, or during the life of the hus- band, those ladies are provided for at his decease. A presentation is secured, and an entry into the establishment is provided. The happiest results have come from these admirable establishments, and we at our congress have, from these high quarters, been chid for not having turned our attention rhitherward. My answer has been, that no sooner was it suggested than I madeit my duty to attend to it. I have acted lately in my sovereign capa- city as president, but my noble friend Lord John Russell has been appointed any successor, or,at all events, as a kind of Regent. I wished to abdicate, but I was not allowed to abdicate, and therefore I speak still as President of that institution. The chapter is receiving these communications from abroad, and I deem it my duty to lose no time in bringing the subject before Sly brethren, and I hope very soon something like a plan will be drawn up. Knowing the great difficulty that arises in various quarters, and among others from the nature of our admirable countrywomen, who in some re- stects are no better natured than any other women—knowing there is a kind 1.4 self-will about those who are in those establishments, as we of our sex aave occasion to know,--(Laughter)—we don't always find when we experi- Pleat on a small scale the managers have not found it always perfectly easy ra make them live entirely well together. .(Renewed laughter.) Those difficulties we don't disguise, but we endeavour to meet them in the front, and with the blessing of Heaven on our endeavour, we seek to give this (benefit and boon to our countrymen." (41sPlauscr.) The Gazette contains a notification that the Queen has by letters pa'- tent granted full authority to Albert Edward Prince of Wales to wear tin. m,s1guia of the Order of the Garter, and to &Ain his stall in St. GeOrp's raPeli and to exercise his rights and privileges as amply sa if he had ueen formally installed. -A 'rept:it-CC-ernes fro.m. Dalin to "OrJa- 'LEA-before lie loaveillpmeit ancilet hat will be bestowed upon Dr.'Cirlfen. • • •"• • • " "6 From a published correspondence betiasen Lord Derby and Sir en Eardley it appears Lord Derby, would willingly settle the Mavabçijk question on the principle of the payment of a sum down to the Roma Catholics, in estimating which, not only the interests of incliViffing but the expectation of the continuance of the grant held out to Re.

Catholics must be considered ; and that Lord John Russell aliPro Of the payment of a sum in full, 300,000/., founded on his own view of what the Roman Catholics are entitled to.

• 4 A telegraphic despatch from Berlin informs its the Berlin ple.440ne began yesterday. " More than half of the electors of tire Arm instance (irrteuhkr) were present. The result was almost. entirely in favour of the new Ministry."

From St. Petersburg we learn that the Neva was closed by ice Tex- terday morning, and navigation stopped.

The trial of Reid at Edinburgh for the murder of Margaret Taylor, was concluded on Thursday by a verdict of not guilty of murder, but guilty, of causing abortion and using instruments to procure it. The Judge seitts Mimed Reid to seven years' penal servitude.

s.„rt A soldier, one of the 64th, who fought with :Havelock, mid 111.44 relieve Lueknow, was robbed of four pound ten shillings and his curia by two women who pretended to help him on with his knareack. One woman was arrested. Mr. Yardley gave the poor man ten shillings. The ease was remanded, and he came before Mr. Selfe. The soldier said he bad been fifteen years away from England ; and wanted to go to his friends. He had plenty of money coming from Persia, and if he got his furlough would not care. Mr. Self° gave him 2/. sent by a gentleman. The so' • thanked the magistrate for this seasonable gift, and said—" I have fought hard for women's sake in India, and was at the relief of Lucknow, au don't want to hurt the prisoner." Mr. Belle said that ueless the WW1= gave up the furlough he would commit her for trial, lie told the soldier that a clergyman had volunteered to send him to his friends. The c man turned out to be the Reverend Robert Liddell, of St. Paul's, Kelt bridge.