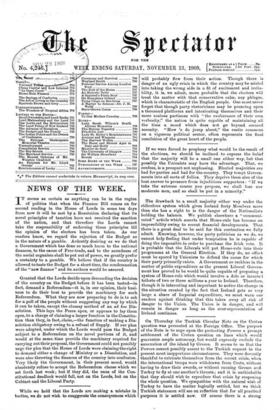 Page 1, 13 November 1909 — The drawback to a small majority either way under the
Close

The drawback to a small majority either way under the

ridiculous system which gives Ireland forty Members more than she has a right to is the danger of the Nationalists holding the balance. We publish elsewhere a "communi- cated" article which asserts that Home-rule has become an impossibility owing to recent financial developments. That there is a great deal to be said for this contention we fully admit. Knowing, however, the party politician as we do, we cannot help feeling that under temptation he is capable of doing the impossible in order to purchase the Irish vote. It is probable that the Liberals will put Home-rule into their programme at the General Election. If they do, no effort must be spared by Unionists to defend the cause for which their party primarily exists. A Government so reckless in the matter of public expenditure as the present Liberal Govern- ment has proved to be would be quite capable of proposing a system of Home-rule which would involve a dole or invertel tribute of two or three millions a year to Ireland. Therefore, though it is interesting and important to notice the change in the situation created by the fact that Ireland gets so very large a share of Imperial expenditure, we must warn our readers against thinking that this takes away all risk of danger to the Union. The Union is in danger, and will remain in danger as long as the over-representation of Ireland continues.