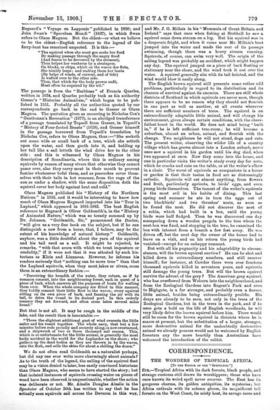 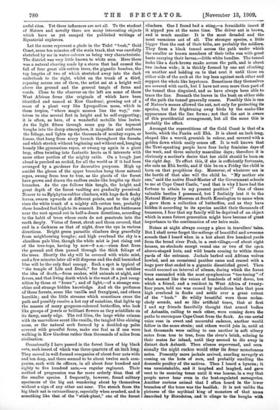 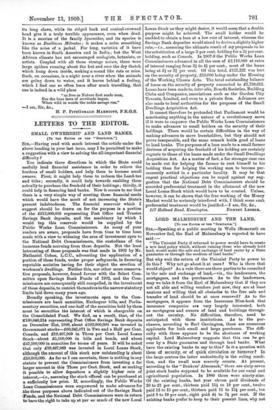 THE WONDERS OF TROPICAL AFRICA.

[To THE EDITOR OP THE " SPECULTOE.1

SIB, —Tropical Africa with its dark forests, black people, and strange customs still draws its worshippers; those who hays once known its weird spell never recover. The East has its gorgeous charms, its golden antiquities, its mysteries ; but Africa enthrals with its solemn gloom, its magnificent tall forests on the West Coast, its misty heat, its savage races and

awful rites. Yet these influences are not all. To the student of Nature and novelty there are many interesting objects which have as yet escaped the published writings of Equatorial explorers.

Let the scene represent a glade in the Tufel "bush," Gold Coast, some ten minutes off the main track, that was carefully sketched by me in water-colours as being very characteristic. The district was very little known to white men. Here there was a natural clearing made by a storm that had caused the fall of four great silk-cotton trees, the gigantic bombax, the top lengths of two of which stretched away into the dark underbush to the right, whilst on the trunk of a third, reposing across one of them, the artist sat at a height well above the ground and the general tangle of ferns and weeds. Close to the observer on the left are some of those West African ferns (the originals of which have been identified and named at Kew Gardens), growing out of a mass of a plant very like Lycopodium moss, which in these tropics, "where magic mosses line the way," con- trives to rise several feet in height and be self-supporting; it is often, as here, of a wonderful metallic blue lustre. As the light filters through some gap in the topmost boughs into the damp atmosphere, it magnifies and confuses the foliage, and lights up the thousands of monkey-ropes, or lianas, that hang from every branch throughout the forests, and which stretch without beginning and without end, hanging loosely like gymnasium ropes, or swung up again in a giant loop, often twisting into fantastic knots as it internets with some other portion of the mighty cable. On a bough just ahead is perched an orchid, for all the world as if it had been arranged by a gardener for decorative purposes. High up amidst the gloom of the upper branches hang these natural ropes, swung from tree to tree, as the giants of the forest have grown and drawn the endless snake-like lengths up their branches. As the eye follows this tangle, the height and great depth of the forest vaulting are gradually perceived. Nearer to us Epiphytes-rubber climbers, with huge dark fleshy leaves, swarm upwards at different points, and to the right rises the white trunk of a mighty silk-cotton tree, probably three hundred feet high to its summit. Its great flat buttresses near the root spread out in half-a-dozen directions, according to the habit of trees whose roots do not penetrate into the earth deeply. Vistas of forest, shrub and thorn covered, that end in a darkness as that of night, draw the eye in various directions. Bright green parasitic climbers drop gracefully from neighbouring boughs; and high overhead the sky is a cloudless pale blue, though the white mist is just rising out of the tree-tops, having by now-9 a.m.—risen first from the ground and then passed through the thick foliage of the trees. Shortly the sky will be covered with white mist, and a few minutes later all will disperse and the dull burnished blue will be the only final canopy. Such a spot is typical of " the temple of Life and Death," for from it one imbibes the idea of death,—from snakes, wild animals at night, and fevers, and that living death which is the want of a just recog- nition by those at " home "; and of light,—of a strange sun- shine and strange hidden knowledge. And oh the perfumes of those forests, some like vanilla and frangipani, and others horrible ; and the little streams which sometimes cross the path and possibly receive a hot ray of sunshine, that lights up the masses of many gorgeous-coloured butterflies, who look like groups of jewels or brilliant flowers as they scintillate on its damp, sandy edge. The red lilies, the large white crinum with its marvellous scent like vanilla, the tangled blue shining moss, or the natural arch formed by a doubled-up palm covered with graceful ferns, make one feel as if one were walking in Kew Gardens rather than thousands of miles from civilisation.

Occasionally I have passed in the forest lines of big black ants, each insect of which was three-quarters of an inch long. They moved in well-formed companies of about four ants wide and ten deep, and there seemed to be about twelve such com- panies, each with its officers, in all about four hundred and eighty to five hundred ants,—a regular regiment. Their method of progression was far more orderly than that of the smaller species. I frequently, however, found solitary specimens of the big ant wandering about by themselves without a sign of any other ant near. The stench from the big black ant is extraordinary, especially when crushed, and is something like that of the " stink-plant," one of the forest climbers. One I found had a sting,—a formidable insect if it nipped you at the same time. The driver ant is brown, and is much smaller. It is the most dreaded and the most voracious ant of all. The stronger species, a little bigger than the rest of their tribe, are probably the soldiers. They form a black tunnel across the path under which the smaller or brown members of their tribe run with great haste carrying their larvae,—little white bundles. The tunnel looks like a dark-brown snake across the path, and is about two inches wide ; it is thickly formed by one ant climbing on another and holding on to that next it until those on either side of the arch at the top lean against each other and support the whole like keystones. Sometimes they themselves are covered with earth, but I have not seen more than part of the tunnel thus disguised, and so have always been able to trace the line. Beneath the leaves in the bush on either side of the path the tunnel generally ceases. Possibly this is one of Nature's means allowed the ant, not only for protecting its species, but for frightening away birds by the snake-like appearance that the line forms ; not that the ant is aware of this providential arrangement, but all the same this is probably the effect.

Amongst the superstitions of the Gold Coast is that of a beetle, which the Fantis call Eba. It is about an inch long, shaped like a weevil, greenish in colour, and covered with a golden down which easily comes off. It is well known that the Tswi-speaking people have four lucky feminine days of the week, and three unlucky masculine days ; therefore it is obviously a mother's desire that her child should be born on the right day. To effect this, if she is sufficiently fortunate, she eats an Ebb, beetle, and if this be on a Friday the child is born on that propitious day. Moreover, of whatever sex is the beetle of that also will the child be. "My mother ate one," said the native Head-Master of the Government schools to me at Cape Coast Castle, " and that is wby I have had the fortune to attain to my present position !" One of these valuable beetles I possessed, but I foolishly lent it to the Natural History Museum at South Kensington to name when I gave them a collection of butterflies, and as they have hidden it according to its species amidst their thousands of treasures, I fear that my family will be deprived of an object which in some future generation might have become of great importance to the continuation of our heirs male.

Noises at night always occupy a place in travellers' tales. But I shall never forget the melange of beautiful and awesome sounds that I heard when in a but about five hundred yards from the broad river Prah, in a rest-village,—of about eight houses, no stockade except round one or two of the open alcove-shaped huts, and wild beasts coming to within three yards of the entrance. Jackals barked and African wolves howled, and an occasional panther came and roared with a huge purr that ended in a gigantic dissatisfied growl. Then would succeed an interval of silence, during which the forest trees resounded with the most symphonious " too-tooing ". of what seemed like the voices of hundreds of wild doves, but which a friend, and a resident in West Africa of twenty- four years, told me was caused by melodious bats that pass high overhead in flocks and settle over a great extent of the "bush." So wildly beautiful were these melan- choly sounds, and so like artificial tones, that at first I and my friends fancifully thought that armed bodies of Ashantis, calling to each other, were coming down the paths to encompass Cape Coast from the flank. As one aerial voice rose in sweet and mournful cadence, another would follow in the same strain; and others would join in, until at last thousands were calling to one another in soft silvery notes from tree to tree, from the river's brink, echoing to their mates far inland, until they seemed to die away in distant dark Ashanti. Then silence supervened, and occa sionally the night cuckoo would utter its drear monotonous notes. Presently more jackals arrived, snarling savagely at coming on the huts of men, and probably smelling the domestic poultry of the natives. Then I heard a hyaena; it was unmistakable, and it laughed and laughed, and gave vent to its sneering tones until it was hoarse, in a way that people never hear even in the best-regulated menageries. Another curious animal that I often heard in the lower branches of the trees was the basilisk. It is not unlike the pictures of the mythical king of monsters of that name described by Herodotus, and it clings to the boughs with

its long claws, while its ridged back and conical-crowned head give it a truly terrible appearance, even when dead. , It is a saurian of the family Iguanidae, and its species is known as Basiliscus 1Ifitratus ; it makes a noise something like the noise of a jackal. For long, varieties of it have been known in South America and in India ; but the West African climate has not encouraged zoologists, botanists, or artists. Coupled with all these strange noises, there were large spiders running about the but and over the dry thatch which hung down inside, making a sound like rats or mice. Such, on occasions, is a night near a river when the animals are going down to water, and it leaves behind a feeling, which I find one so often loses after much travelling, that one is indeed in a wild place " as free as Nature first made man, Ere the base laws of servitude began,