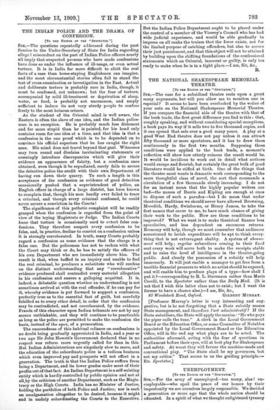 [To THE EDITOR OF TES " SPECTATOR:1

SIR, —The case for a subsidised theatre rests upon a great many arguments, but will you allow me to mention one in especial? It seems to have been overlooked by the writer of your note on the National Shakespeare Memorial Theatre. If you compare the financial side of the theatre with that of the book trade, the first great difference you find is this : that, roughly speaking, and without considering special exceptions, a book pays its way if it sells two to five thousand copies, and it can spread that sale over a good many years. A play at a good West End theatre does not pay unless it can attract fifty thousand or more spectators, and it has to draw them continuously in the first two months. Supposing these conditions were applied to the book trade, a moment's reflection will show how utterly ruinous the result would be. It would be invidious to work out in detail what authors would escape and flourish, but certainly the great bulk of good literature would be stifled at birth. One of the things that the theatre most wants is dramatic work corresponding to the more thoughtful class of novel, the sort that commands a circulation of a few thousands slowly increasing. I do not for an instant mean that the highly popular writers are bad—the names of Barrie and Kipling are enough at once to dispose of such a paradox—but I do mean that under theatrical conditions we should never have allowed Browning, Meredith, Hardy, Swinburne, or Henry James, to take the first names that occur to me, to have much chance of giving their work to the public. How are these conditions to be improved? What we want is to make theatrical finance less speculative, and less dependent on enormous returns. Economy will help, though we must remember that audiences accustomed to lavish expenditure will be apt to think every- thing that is not extravagant shabby. A system of ebonize. ment will help ; regular subscribers coming to their fixed seat every week will serve both to make the receipts stable and to raise the level of intelligence in the theatre-going public. And clearly the possession of a subsidy will help immensely. It will just enable a manager to get free from a terrible financial pressure to which no artist should be exposed, and will enable him to produce plays of a type—how shall I put it P—corresponding to R. L. Stevenson rather than Marie Corelli, to the Spectator rather than the Daily Mail. (It is not that I wish this latter class not to exist; but I want the former to have a chance also.)—I am, Sir, &e., [Professor Murray's letter is very interesting and sug- gestive, but is he not forgetting that a State subsidy means State management, and therefore ]'art administratif I If the State subsidises, the State will apply the maxim: "Ho who pays the piper calls the tune." A clerk in the Local Government Board or the Education Office, or some Committee of Notables appointed by the Local Government Board or the Education Office, will in the end say what plays are to be acted. The authorities aforesaid, acting with the fear of questions in Parliament before their eyes, will at best play for Shakespeare and safety. At worst they will favour the machine-made and conventional play. " The State shall be my governors, but not my critics." That seems to us the guiding principle.— En. Spectator.]