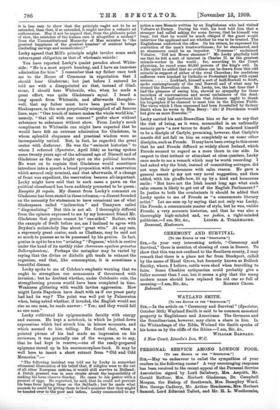 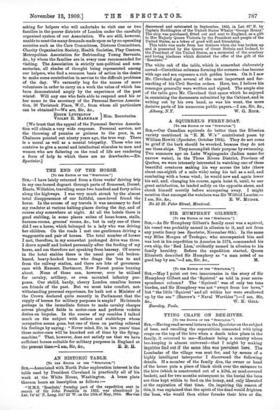 [To THE EDITOR. OF THE " SPECTATOR."] SIR,—May we endeavour to enlist the sympathies of your readers in. the following cause? A very encouraging response has been received to the recent appeal of the Personal Service Association signed by. Lord Salisbury, Mrs. Asquith, Mr. Gerald Balfour, Mrs. Herbert Gladstone, Dr. Campbell Morgan, the, Bishop of Southwark, Mrs. Humphry Ward, Mrs. George Cadbury, Mr. Arthur Henderson, Mrs. Herbert Samuel, Lord Edmund. Talbot, and Mr. H. L. Woolleombe„

asking for helpers who will undertake to visit one or two families in the poorer districts of London under the carefully organised system of our Association. We are still, however, unable to meet the many demands made upon us by co-operating societies such as the Care Committees, Distress Committees, Charity Organisation Society, Health Societies, Play Centres, Metropolitan Association for Befriending Young Servants, &c., by whom the families are in every case recommended for visiting. The Association is strictly non-political and non- sectarian, all shades of thought being represented among our helpers, who find a common basis of action in the desire to make some contribution in-service to the difficult problems of the day. We earnestly beg for the names of more volunteers in order to carry on a work the value of which has been demonstrated amply by the experience of the past winter. Will any one who feels able to respond send his or her name to the secretary of the Personal Service Associa- tion, 36 Tavistock Place, W.C., from whom all particulars can be obtained P—We are, Sir, &c.,

[We trust that the appeal of the Personal Service Associa- tion will obtain a very wide response. Personal service, not the throwing of pennies or guineas to the poor, is, as Chalmers pointed out ninety years ago, the true way. There is a moral as well as a mental telepathy. Those who can contrive to give a moral and intellectual stimulus to men and women who are faltering on the road of life are rendering a form of help to which there are no drawbacks.—En. Spectator.]