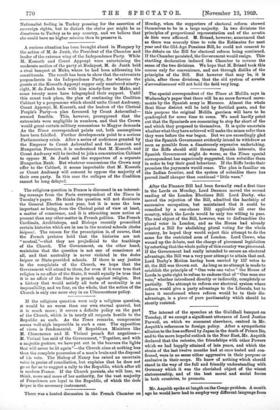 Page 2, 13 November 1909 — The interest of the speeches at the Guildhall banquet on
Close

The interest of the speeches at the Guildhall banquet on

Tuesday, if we except a significant utterance of Lord Justice Farwell, on which we comment elsewhere, centred in Mr. Asquith's references to foreign policy. After a sympathetic allusion to the loss suffered by Japan in the death of Prince Ito, and to the more hopeful outlook in the Near East, Mr. Asquith declared that the ententes, the friendships with other Powers which we had happily attained of late years, and which the strain of the last twelve months had at once tested and con- firmed, were in no sense either aggressive in their purpose or exclusive in their scope. He knew of nothing which should stand in the way of the full and friendly understanding with Germany which it was the cherished object of the wisest statesmanship, and of the best moral and social forces in both countries, to promote.