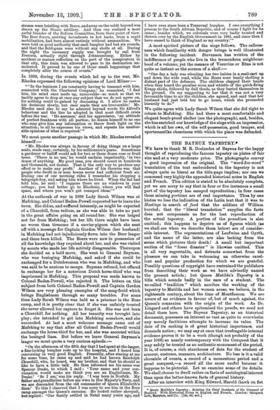 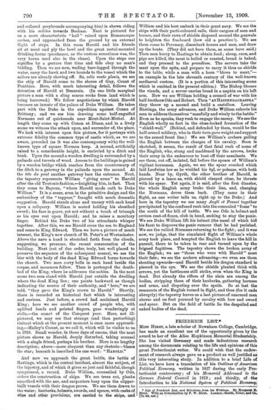 WE have to thank M. R. Deslandes of Bayeux for tho happy thought of reproducing the famous tapestry on plates of fair size and at a very moderate price. The photographs convey a good impression of the original. The " word-for-word " translation of the text embroidered in the tapestry is not always quite so literal as the title-page implies; nor can we commend very highly the appended historical notes in English and French. This edition is stated to be absolutely complete, yet we are sorry to say that in four or five instances a small part of the tapestry has escaped reproduction ; in four cases these missing portions are of real importance. Thus by one hiatus we lose the indication of the Latin text that it was to Hastings in search of food that the soldiers of William hurried ; that the "literal translation" supplies the facts does not compensate us for the lost reproduction of the actual tapestry. A portion of the prandiunt is also omitted; this happens to deprive us of figures which (as we shall see when we describe them below) are of consider- able interest. The representations of Leofwine and Gyrth, and the name of the latter, are also lacking from the scene which pictures their death! A small but important section of the "fosse disaster" is likewise omitted. This is all very regrettable, and detracts somewhat from the pleasure we can take in welcoming an otherwise excel- lent and popular production for which we are grateful. Possibly questions of copyright have restrained the publishers from describing their work as we have advisedly named the present article ; but Queen Matilda's Tapestry is a title which sounds badly in the ears of a student. The so-called " tradition " which ascribes the working of the tapestry to Matilda and her women arose, we believe, in the eighteenth century, about the time of Montfaucon. We are aware of no evidence in favour of, but of much against, the Queen's connexion with the origin of the work. As Dr. Lingard and others have epitomised the proofs, we need not detail them here. The Bayeux Tapestry, as an historical document, possesses an interest so vast aa quite to overwhelm any merely factitious attempts to increase its value. The date of its making is of great historical importance, and demands notice ; we may say at once that irrefragable internal evidence proves it to be a work (though not probably of the year 1066) so nearly contemporary with the Conquest that it may safely be treated as an authentic monument of the period. It is, of course, a rich storehouse of data for the student of armour, costume, manners, architecture. No less is it a valid chronicle of events, a record of a momentous period and a great conquest,—a record all the more useful because it happens to be pictorial. Let us examine some of its details. We shall choose to dwell rather on facts of sociological interest than upon the better-known facts of general history.

• Queen Matikla's Tapestry Relating the Chief Incidents of the Conquest of England. With Histonail Notes in English and French. London i Beunpuon

and collared greyhounds accompanying him) is shown riding with his milites towards Bosham. Next is pictured for us a most characteristic " hall " raised upon Romanesque arches, and approached from the ground by an external flight of steps. In this room Harold and his friends sit at meat and ply the bowl and the great metal-mounted drinking-horns (perchance, as the custom sometimes was, the very horns used also in the chase). Upon the steps one signifies by a gesture that time and tide obey no man's bidding. Then we see men, wading bare-legged through the water, carry the hawk and two hounds to the vessel which the sailors are already shoving off. So, Delis vento Timis, we see the ship of Harold come to the shores of. Guy, Count of Ponthieu. Here, with much interesting detail, follows the detention of Harold at Beaurain. (In one little marginal picture a man with a sling scares rooks from land which is being harrowed.) We follow negotiations by which Harold becomes an inmate of the palace of Duke William. He takes part with the Duke in the expedition against Conan of Brittany ; and we see him drawing some half-engulfed Normans out of quicksands near Mont-Saint-Michel. At length they come up with Conan at Dinan, and in a lively scene we witness the attack upon, and surrender of, the place. We look with interest upon this picture, for it portrays with extreme fidelity the common type of castle which, as we are aware, preceded (as it was also contemporary with) the well- known type of square Norman keep. A mound, artificially raised to a considerable height, is encircled by a ditch and bank. Upon the mound a wooden dwelling is surrounded by a palisade and turrets of wood. Access to the buildings is gained by a wooden bridge which reaches from the counterscarp of the ditch to a gateway in the palisade upon the mound. At the tete the pont another gateway bars the entrance. Next, the tapestry represents William "giving arms" to Harold after the old Teutonic fashion,—knighting him, in fact. Then they come to Bayeux, "where Harold made oath to Duke William." It is a scene, even in the primitive design and the embroidery of the " tapycer," fraught with much dramatic suggestion. Harold stands alone and uneasy with each hand upon a reliquary. William is seated holding his sheathed sword ; his face is grave, yet not without a touch of triumph as his eyes rest upon Harold; and he raises a monitory finger. Behind the Duke two of his attendants whisper together. After this, we see Harold cross the sea to England and come to King Edward. Then we have a picture of much interest, the King's new church of St. Peter's at Westminster. Above the nave a hand is stretched forth from the clouds, suggesting, we presume, the recent consecration of the building. Next (out of due order, truly, but well placed to preserve the sequence of the subsequent scenes), we see the bier with the body of the dead King Edward borne towards the church. Two men carry bells in each hand beside the corpse, and mourners follow. Then is portrayed the death- bed of the King, where be addresses the nobles. In the next scene two men stand with Harold just outside the dwelling where the dead King lies ; one points backward as though indicating the source of their authority, and " here," we are told, "they gave the King's crown to Harold." Shortly, there is recorded an historical fact which is interesting and curious. Just before, a crowd had acclaimed Harold King ; here we see another crowd of people who, with uplifted heads and pointed fingers, gaze wonderingly at stella,—the comet of the Conquest year. Here, not ill- pictured, we may see that strange (and then perturbing) visitant which at the present moment is once more approach- ing,—Halley's Comet, as we call it, which will be visible to us in 1910. Small wonder, in those days of omens, that the next picture shows us.Harold, deeply disturbed, taking counsel with a single friend, perhaps his brother. Here is no lengthy description; above--more eloquent than any rhetorio-7-blaxes the star; beneath is inscribed the one word : "HAROLD."

And now . we approach the grea.t, battle, the battle of Hustings, which is the central incident, almost the subject, of the tiPestry, and of, which it gives so just and faithful, though compressed, a record. Duke William, counselled by Odo, Ciders the construction of ships.. We see trees cut, planks s4noothed with the axe, and carpenters busy upon the clipper- builtvessels with their dragon prows. We see them drawn to the water ; hauberks, helmets, swords, and spears, with casks of wine hild other provisions, are carried to the ships, auk William and his host embark in their great navy. We see the ships with their parti-coloured sails, their cargoes of men and horses, and their rows of shields disposed around the gunwale to heighten the freeboard (how old a practice !). We see them come to Pevensey, disembark horses and men, and draw up the boats. (They did not burn them, as some have said.) Then men hurry to Hastings to obtain food ; sheep, oxen, and pigs are killed, the meat is boiled or roasted, bread is baked, and they proceed to the prandison. The servers take the meat upon the spits, and prepare to carry it thus on shields to the table, while a man with a horn "blows to meat,"— an example in the late eleventh century of the well-known mediaeval custom. (It is a portion of this interesting scene which is omitted in the present edition.) The Bishop blesses the viands, and a server carries bread in a napkin on his left arm. Now we see William holding a council of war with his half-brothers Odo and Robert. Then "ATHESTENGACEASTRA" they throw up a mound and build a eastellum. Leaving Hastings, the army advances, and Duke William exhorts his men to address themselves "manfully and wisely to the battle," Even as he speaks, they rush to engage the enemy. We see the English wholly on foot in the close-locked formation of the " shield-wall." (Behind, and defended by them, would be the half-armed soldiery, who in their turn gave weight and support to the armed front line.) We see William's archers galling the English between the charges of his cavalry. Soon is sketched, it seems, the result of that fatal rush of some of the English, who, stung and maddened by the arrows, broke their array in the endeavour to beat off their assailants. We see them, cut off, isolated, fall before the spears of William's vigilant horsemen. Again, we see the spear couched which laid Leofwine low as he wielded his byl, or poleaxe, with both hands. Near by, Gyrth, the other brother of Harold, is pierced by a lance as, with shield clasped close, he thrusts with his spear. Yet again, it is said, after the first disaster, the whole English army broke their line, and, charging the Normans, drove them back. (They came in their flight, as one writer tells us, right up to the Duke.) And here in the tapestry we see many Anil et .Franci together precipitated by the confused rush into the concealed "fosse " to the south of the hill of battle. We see Ode in helmet and corium coat-of-fence, club in hand, seeking to stay the panic. We see Duke William lift his helmet (the nasal of which hid his face) to disprove the panic rumour that he had perished. We see the rallied Normans returning to the fight ; and it was now, we judge, that the simulated flight of William's whole army took place, and tempted the English to leave the hill in pursuit, there to be taken in rear and turned upon by the feigned fugitives. The tapestry shows the broken array of the English; we see "those who were with Harold" meet their fate ; we see the archers advancing—we even see them shooting upwards—and Harold beside his dragon standard is pierced in the eye. We see the shields 'planted thick with arrows, yet the battleaxes still strike, even when the King is dead. But already the riflers of the slain are among the bodies, stripping them of their hauberks, gathering harness and arms, and disputing over the spoils. So at last the remnants of the English turned in flight, and thus (for it ends abruptly) the tapestry leaves us a last picture of unarmed men ahorse and on foot pursued by cavalry with bow and sword and spear. But on the field of battle lie the despoiled and naked bodies of the dead.