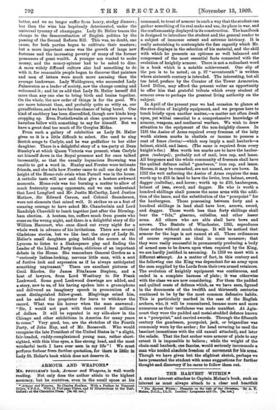 ARMOUR AND WEAPONS.• YFOULICE8 1 8 book, Armour and Weapons, is well

worth reading. Not only does the author attain to the highest accuracy, but he contrives, even in the small space at his

• Armour and Weapons. By Charles ffounces. With a Preface by Viscount

command, to treat of armour in such a way that the student can gather something of its real make and use, its place in war, and the craftsmanship displayed in its construction. The handbook is designed to introduce the student and the general reader to a subject of immense extent and extreme intricacy. It is really astonishing to contemplate the fine capacity which Mr. ffoulkes displays in the selection of his material, and the skill with which he presents an. epitome so well balanced and compressed of the most essential facts connected with the evolution of knightly armour. There is not a redundant word in a book which is a notable achievement. One slip of the pen is to be noted; on p. 97 "seventeenth" is written where sixteenth century is intended. The interesting, but all too brief, preface by the Curator of the Tower Armouries, Lord Dillon, may afford the present writer an opportunity to offer him that grateful tribute which every student of armour owes to perhaps the greatest living authority on the subject.

In April of the present year we had occasion to glance at the evolution of knightly equipment, and we propose here to touch briefly upon another matter,—a matter not often dwelt upon, yet withal essential to a comprehensive knowledge of armour, weapons, and mediaeval warfare. We wish to draw attention to the equipment of the non-knightly classes. In 1181 the Assize of Arms required every freeman of the laity worth sixteen marks in chattels or income to possess a coat of fence (lorica)—which may imply a mail hauberk—a helmet, shield, and lance. (The same is required from every knight's-fee.) Men worth ten marks are to have the hauber- geon (aubergel), probably not of mail, iron cap, and lance. All burgesses and the whole community of freemen shall have the quilted defence called "gambeson," iron cap, and lance. Horses, it may be remarked, are not named, nor are bows. In. 1252 the writ enforcing the Assize of Arms requires the man worth up to £15 in land to have the lorica, iron helmet, sword, dagger (cultellus), and horse ; worth up to £10, haubergeon, helmet of iron, sword, and dagger. He who is worth a hundred shillings shall possess the same arms with the addi- tion of the lance, and the substitution of the " pourpoint " for the haubergeon. Those possessing between forty and a hundred shillings in land shall have bow, arrows, sword, and dagger. Those worth less than forty shillings shall bear the "fall," gisarme, cultellus, and other lesser arms. All others who are able shall have bows and arrows. The Statute of Winchester, 1285, reproduces these orders without much change. It will be noticed that armour for the legs is not named at all. These ordinances of course represent an ideal in some measure; that they were really successful in permanently producing a body of armed men to be drawn upon when required by the King, we are hardly justified in assuming. In 1359 we meet with a different attempt. As a matter of fact, in this century and the following one the King was dependent for an army upon the men supplied by the Lords from their own armed retainers. The evolution of knightly equipment was continuous, and ended in a complete harness of plate ; it was otherwise with the class we are now considering. For them the padded and quilted coats of defence which, as we have seen, figured in the documents of the twelfth and thirteenth centuries continued to be by far the most common defensive habits. This is particularly marked in the case of the English archers, who, it will be remembered, became more and more numerous as their usefulness was made manifest. At Agin- court they wore the padded and metal-studded defence known as a "pourpoint," and carried swords. Through the fifteenth century the gambeson, pourpoint, jack, or brigandine was commonly worn by-the archer ; for head covering he used the bascinet (sometimes with the old camail attached), and later the salade. That the foot archer wore armour of plate to any extent it is impossible to believe ; while the weight of the chain-mail hauberk, one fancies, would seriously incommode a man who needed absolute freedom of movement for his arms, Though we have given but the slightest sketch, perhaps we have presented the student with some suggestions for further thought and.discovezy if he cares to follow them out.