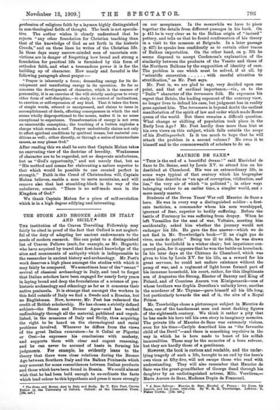 MAURICE DE SAXE.* " Tars is the end of a

beautiful dream !" said Afarechal de Saxe to Dr. Sense, sent by Louis XV. to attend him on hie deathbed at Chambord. His was an extraordinary life, in some ways typical of that century which his biographer makes him describe as "an age of corruption, vilification, and lies," the very air of which " is polluted " ; in other ways belonging rather to an earlier time, a simpler world, and a more manly master.

Students of the Seven Years' War call Maurice de Saxe a hero. He was in every way a distinguished soldier : a first. rate tactician, a commander whom his men worshipped, ignorant of fear, superior to bodily suffering. Before the battle of Fontenoy he was suffering from dropsy. When he left Versailles for the seat of war, Voltaire, meeting him accidentally, asked him whether the journey would not endanger his life. He gave the fine answer—which we do not find in Mr. Trowbridge's book—" Il ne s'agit pas de vivre, mais de partir." Being too ill to ride, he was drawn on to the battlefield in a wicker chair ; but impatience con- quered pain, for it appears that he won the battle on horseback. In his later days at the Chateau de Chambord, which was given to him by Louis XV. for his life, as a reward for his great services, he could not endure existence without the pomp of war, and a regiment of light horse formed part of his immense household, his court, rather, for this illegitimate son of Augustus the Strong, Elector of Saxony and King of Poland, and of Countess Aurora von Konigsmarck—one of whose brothers was Sophia Dorothea's unlucky lover, another the murderer of Mr. Thynne—gave himself all his life long, but particularly towards the end of it, the airs of a Royal Prince.

Saxe, one of the handsomest men and most dashing figures of the eighteenth century. We think it rather a pity that he has made his hero tell his own story in imaginary memoirs. The private life of Maurice de Saxe was extremely vicious, even for his time—Carlyle described him as " the favourite child of the Devil "—and there is something repulsive in the way in which he is here made to boast of his selfish immoralities. These may be the memoirs of a beau sabreur, but they are hardly those of a gentleman.

However, the book is curious and readable, and the under- lying tragedy of such a life, brought to an end by the hero's own vices at fifty-five, will not escape those who read with understanding. They will also remember that Maurice de Saxe was the great-grandfather of George Sand through his daughter by an undistinguished actress, Mlle. Verrieres,— Marie Aurore de Saxe, Madame Dupin de Francueil.