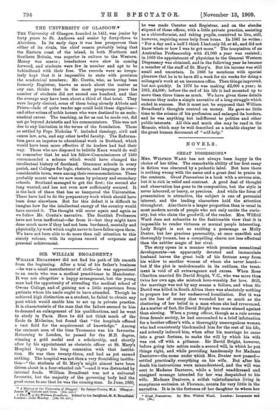 of life smooth from the beginning. After a trial of his father's business —he was a small manufacturer of cloth—he was apprenticed to an uncle who was a medical practitioner in Manchester. It was not altogether a happy arrangement, but the young man had the opportunity of attending the medical school of Owens College, and of gaining not a little experience from patients whom his uncle ought to have attended. Though he achieved high distinction as a student, he failed to obtain any post which would enable him to set up in private practice. It is characteristic of the man that the failure seemed to him to demand an enlargement of his qualifications, and he went to study in Paris. Here he did not think much of the Ecole de Medecine, but found that " the hospitals offered a vast field for the acquirement of knowledge." Among the eminent men of the time Trousseau was his favourite. Returning to London, he passed for the M.B. degree, winning a gold medal and a scholarship, and shortly after by his appointment as obstetric officer at St. Mary's Hospital began his long connexion with that institu- tion. He was then twenty-three, and had as yet earned nothing. The hospital was not then a very flourishing institu- tion—" the students of St. Mary's might almost have been driven about in a four-wheeled cab "—and it was distracted by internal feuds. William Broadbent was not a universal favourite, but the majority of the governing body had the good sense to see that he was the coming "roan. In June, 1860, A History of the University of Mauna:. 'By Jained Conde, M.A 'Glasgow: James Y....-11..ehose and Bons. [21s. net.] t The 1.‘ of Sir William Broadbent. Edited by his Dabghte4 M. E. Hroadbeni: London: *John Murray. [12.s. 6d. net.] he was made Curator and Registrar, and on the Blends: stipend of these offices, with a little private practice, assisting as a chloroformist, and taking pupils, contrived to live, still, however, requiring some help from home. In 1861 he writes : " For a day and a half I think I had only 3d. or 4d., and did not know when or how I was to get more." The temptation of an Australian Professorship with £1,000 a year was resisted ; in 1863 the appointment of physician to the General Western Dispensary was obtained, and in the following year he became a member of the staff of St. Mary's. But his income was still small and uncertain. In 1868 he mentions with special pleasure that he is to have £3 a week for six weeks for doing a colleague's work at an insurance office. Then things improved, but not quickly. In 1876 he was making £2,000 a year; in 1881, £4,000; before the end of his life it had mounted up to more than three times as much. We have given these details because they make a simple narrative of a long struggle which ended in success. But it must not be supposed that William Broadbent's thoughts centred on money. He gave no little time to the science of his profession and enlarged its borders, and he was anything but indifferent to politics and other public interests. All this and much else may be read in the Memoir, which may be well described as a notable chapter in the great human document of " self-help."