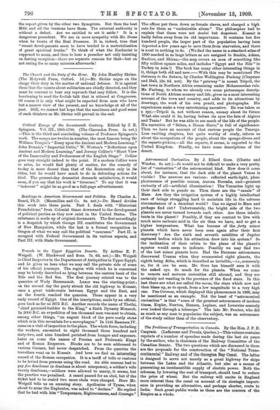 net.)—It would not be difficult to make a very pretty list of " curiosities " of the astronomical kind. How does it come about, for instance, that the dark side of the planet Venus is visible ? The answers are various ; reflected earth-light, phos- phorescence of possible oceans, Aurora Borealis, and—greatest curiosity of all—artificial illumination ! The Venusites light up their dark side to puzzle us. Then there are the " canals " of Mars. Are they the irrigation system of a highly intellectual race of beings struggling hard to maintain life in the adverse circumstances of a decadent world ? Can we signal to Mars and perhaps find out ? Unfortunately, the bright side of the two planets are never turned towards each other. Are there inhabi- tants in the planet ? Possibly, if they are content to live with much more carbonic acid in the air than we have, and so get a higher temperature. What has become of the forty minor planets which have never been seen again after their first discovery ? Are the sixth and seventh satellites of Jupiter captured bodies which his attraction drew into his system ? So the inclination of their orbits to the plane of the planet's equator would seem to indicate. Possibly we may find two of the lost minor planets here. Had the Burmese astronomers discovered Uranus when they enumerated eight planets, the eighth being Bahia, which is described as invisible,—i.e., commonly so, for it can be seen. Mr. Gore has himself seen it with the naked eye. So much for the planets. When we come to oomets and meteors curiosities still abound, and they are certainly not wanting in the province of the fixed stars. In this last there are what are called the novae, the stars which now and then blaze up, so to speak, from a low magnitude to a very high one. Tau Coronae, which displayed this phenomenon in 1866, may be mentioned as an example. Not the least of " astronomical curiosities" is that " some of the greatest astronomers of modern times, Kepler, Newton, Tlain9en, Laplace, and Leverrier scarcely ever looked through a telescope." The late Mr. Proctor, who did as much as any man to popularise the subject, was an astronomer of the study rather than of the observatory.