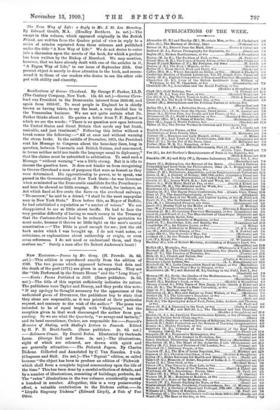 Recollections of Grover Cleveland. By George F. Parker, LL.D. (The

Century Company, New York. 12e. 6d. net.)—Grover Cleve- land was President in the Democratic interest from 1885-89, and again from 1893-97., To most people in England he is chiefly known as having taken, to say the least, a very decided line in the Venezuelan business. We are not quite certain what Dr. Parker thinks about it. He quotes a letter from T. F. Bayard in which we see the words : " There is no question now open between the United States and Great Britain that needs any but frank, amicable, and just treatment.4 Following this letter without a break comes the following :—" All at once and without warning the storm broke. In the middle of December, 1895, the President sent his Message to Congress about the boundary lines, long in question, between Venezuela and British Guiana, and announced, in terms neither mild nor inside the language usual to diplomacy," that the claims must be submitted to arbitration. To send such a Message " without warning " was a little strong. But it is idle to discuss the question here. It doss not hinder us from recognising in Grover Cleveland a man of purposes that were as honest as they were determined. His apprenticeship to power, so to speak, was passed in the Governorship of New York State—he was Governor when nominated as the Democratic candidate for the Presidency— and here he showed no little courage. He vetoed, for instance, an Act which fixed at five cents the fares on the overhead railways. " To-morrow," he said to a friend, " I shall be the most unpopular man in New York State." Even before this, as Mayor of Buffalo, he had established a reputation as " a master of vetoes." We are disappointed to see so little about tariffs. He had to face the very peculiar difficulty of having so much:money in the Treasury that the Customs-duties had to be reduced. One quotation we must make, because it throws no little light on the man's mental constitution :—" The Bible is good enough for me ; just the old book under which I was brought up. I do not want notes, or criticisms, or explanations about authorship or origin, or even cross references. I do not need or understand them, and they confuse me." Surely a man after Sir Robert Anderson's heart !