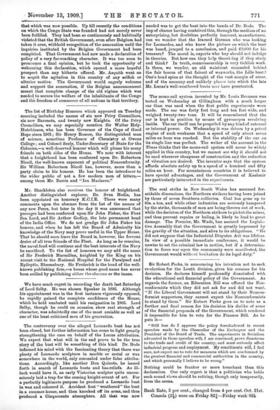 Page 3, 13 November 1909 — The controversy over the alleged Leonardo bust has not been
Close

The controversy over the alleged Leonardo bust has not been

closed, but further information has come to light greatly strengthening the case on behalf of the Lucas attribution. We expect that what will in the end prove to be the true story of the bust will be something of this kind. Dr. Bode inflamed his mind with the fascinating theory that there was plenty of Leonardo sculpture in marble or metal or wax somewhere in the world, only concealed under false attribu- tions. Accordingly, like another Don Quixote, he issued forth in search of Leonardo busts and bas-reliefs. As ill- luck would have it, an early Victorian sculptor quite uncon- sciously laid a trap for the coming knight-errant of art. For a. perfectly legitimate purpose he produced a Leonardo bust in wax and coloured it. Accident first "weathered" the bust in a summer-house, and then knocked off its arms, and thus produced a Cinqnecento atmosphere. All that was now needed was to get the bust into the bands of Dr. Bode. The imp of chance having contrived this, through the medium of an enterprising, but doubtless perfectly innocent, manufacturer, can we wonder that the learned German who was looking for Leonardos, and who knew the picture on which the bust was based, jumped to a conclusion, and paid £8,000 for his treasure? The moral is, experts who buy should not indulge in theories. But how can they help theorising if they study and think P In truth, connoisseurship is very ticklish work. Is there, we wonder, an old waistcoat concealed behind the fair bosom of that fairest of waxworks, the Lille bust? One's head spins at the thought of the vast margin of error. and of the uncanny and unlikely places into which the late Mr. Lucas's well-weathered busts may have penetrated.