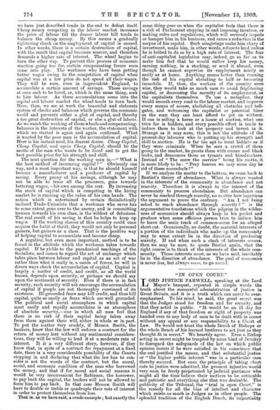 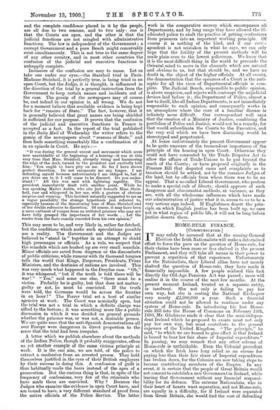 TIORD JUSTICE FARWELL, speaking at the Lord Mayor's banquet, repeated in simple words the truth about the successful administration of justice in Great Britain, and it is a truth which can never be over- emphasised. To his mind, he said, the great secret was that the Judges stood for freedom and for security, and that they acted in public. " It would be an ill day for England if any of that freedom or right of property was handed over to any body of men to be dealt with in secret without any appeal or any responsibility to a Court of Law. He would not trust the whole Bench of Bishops or the whole Bench of his learned brethren to act just as they thought fit in secret." We heartily agree. Even a Bishop acting in secret might be tempted by some kind of jesuitry to disregard the safeguards of the law on which public opinion insists if he were satisfied in his conscience that the end justified the means, and that substantial justice or " the higher public interest " was in a particular ease thereby secured. But once the principle of taking short cuts to justice were admitted, the grossest injustice would very soon be freely perpetrated by judicial partisans who might all the time believe their motives to be estimable and patriotic and everything else that was desirable. The publicity of the Tribunal, the " trial in open Court," is the remedy for all the bias of intellect and character which exists as much in Judges as in other people. The splendid tradition of the English Bench, its impartiality and the complete confidence placed in it by the people, are all due to two reasons, and to two only : one is that the Courts are open, and the other is that the judicial functions are not mingled with administrative functions. The law is independent of the Government ; a corrupt Government and a pure Bench might conceivably exist simultaneously. This is not true in the same degree of any other country, and in most other countries the confusion of the judicial and executive functions is unhappily complete. Instances of the confusion are easy to name. Let us take one under our eyes,—the Steinheil trial in Paris. Madame Steinheil, it is perfectly true, is being tried in an open Court, but the Judge, it is thought, is influenced in the direction of the trial by a general instruction from the Government to keep certain names and incidents out of the case. The gossip of the newspapers may of course be, and indeed in our opinion is, all wrong. We do not for a moment believe that available evidence is being kept back for " reasons of State." The fact, however, that it is generally believed that great names are being shielded is sufficient for our purpose. It proves that the confusion of the judicial and executive functions in France is accepted as a fact. In the report of the trial published in the Daily Mail of Wednesday the writer refers to the gossip of the newspapers about " reasons of State," and then finds something remarkably like a confirmation of it in an episode in Court. He says :- "It was during the general unrest and movement which seem now unavoidable at the beginning of a hearing—it was at this very time that Dime. Steinheil, abruptly rising and hammering the edge of the dock, turned to the president and excitedly told him: 'You ought to have pity on me. So far I have shown perfect discretion. Do not exasperate me any longer. I am defending myself because unfortunately I am obliged to, but if you drive me to it I will cease to be discreet. Do you under- stand ? ' All this was said with lightning rapidity. The president immediately dealt with another point. While he was speaking Maitre Aubin, who sits just beneath Dime. Stein- heil, rose and whispered in her ear, with a gesture of obvious surprise and warning. This incident naturally suggested to me as a vague possibility the strange hypothesis just referred to, especially because of the threatening tone of Mme. Steinheil and of her double reference to discretion. Of course, it may have been a mere outburst of temper from an irritated prisoner who may not have fully grasped the importance of her words. . . Let the reader from the facts exactly recorded form his own opinion."

This may seem to be, and very likely is, rather far-fetched, but the conditions which make such speculations possible are a reality. The Government and the Judges are believed to " stand in " together in an attempt to shield high personages or officials. As a rule, we suspect that the scandals which are hushed up are very small scandals. Minor officials are saved from disgrace or the discomforts of public criticism, while rumour with its thousand tongues tells the world that Kings, Emperors, Presidents, Prime Ministers, and the destinies of nations are involved. This was very much what happened in the Dreyfus case. " Oh," it was whispered, " but if the truth is told. there will be war ! " " Yes," said some one else, " there must be a victim. Probably he is guilty, but that does not matter ; guilty or not, he must be convicted. If the truth were told, the Germans would be across the frontier in an hour !" • The Ferrer trial set a host of similar agencies at work. The Court was nominally open, but the trial was not a trial in which a definite charge was sifted to the bottom ; it was something more like a public discussion in which it was decided on general grounds whether the prisoner was, or was not, a desirable person. We are quite sure that the anti-Spanish demonstrations all over Europe were dangerous in direct proportion to the sense that the trial had been irregular.

A letter which we publish elsewhere about the methods of the Indian Police, though it probably exaggerates, offers us yet another example of the same vicious principle at work. It is the one aim, we are told, of the police to extract a confession from an arrested person. They hold. themselves justified in the eyes of their British employers by their success in doing this. A confession of guilt is thus habitually made the basis instead of the apex of a prosecution. But the curious thing is that, in spite of the frequency of confessions, very few of the criminals who have made them are convicted. Why ? Because the Judges who examine the evidence in open Court have, and are bound. to have, a very different standard of proof from the native officials of the Police Service. The latter work in the comparative secrecy which encompasses all Departments, and by long usage they have allowed the ill- educated police to exalt the practice of getting confessions from prisoners into an important working principle. Of course it is nothing of the kind, and if our corre- spondent is not mistaken in what he says, we can only hope that the futility of the present methods will be made plain even to the lowest policeman. We know that it is the most difficult thing in the world to persuade the Oriental mind to move in the channels which are natural and obvious to us, but that should be, and we have no doubt is, the object of the higher officials. At all events, the demonstration that the openness of a Court is the anti- septic for all the vices of Departmental officials is com- pleth. The Judicial Bench, responsible to public opinion, is above suspicion, and rejects with contempt the unjudicial devices laid before it ; the Department of Police, almost a, law to itself, like all Indian Departments, is not immediately responsible to such opinion, and consequently works in an atmosphere where the cure of a familiar disease is infinitely more difficult. Our correspondent well says that the creation of a Ministry of Justice, combining the portfolios of Police and Justice, would. not be a remedy, for that would subordinate the Courts to the Executive, and the very evil which we have been discussing would be stereotyped and perpetuated. At home unfortunately the present Government appear to be quite unaware of the tremendous importance of the principle of the hearing in open Court. Otherwise they could not have consented by the Trade Disputes Act to allow the affairs of Trade-Unions to be put beyond the reach of the Courts ; or have proposed originally in the Finance Bill that disputed cases and complaints as to taxation should be settled, not by the common Judges of the land, but by officials from whom there was to be no appeal. That a so-called Liberal Government, who profess to make a special cult of liberty, should approve of such dangerous and obscurantist methods, at variance, as they are, with all the wholesome influences which have made our administration of justice what it is, seems to us to be a very serious sign indeed. If Englishmen desert the prin- ciple on which English justice has been built up, we care not in what region of public life, it will not be long before justice deserts them.