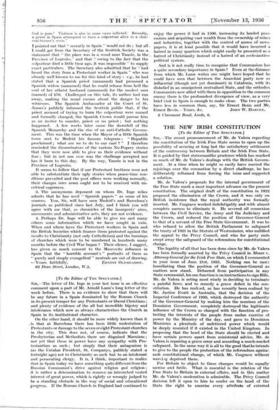 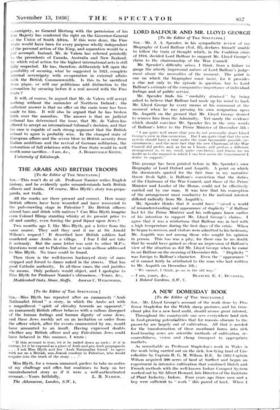 [To the Editor of THE SPECTATOR.] SIR,—The recent pronouncement of Mr. de Valera regarding the constitution of the Irish Free State seems to open up the possibility of securing at long last the satisfactory settlement of the controversy between Britain and the Irish Free State. It is guided by that statesmanlike prudence which has marked so much of Mr. de Valera's dealings with the British Govern- ment. At a time when he might so easily have marred the rejoicings over the coronation by a direct challenge, he has deliberately refrained from forcing the issue and suggested a solution.

Mr. de Valera's proposals for the internal government of the Free State mark a Most important adVance on the present constitution. The original draft of the constitution. in 1922 proposed the elimination of the Crown, and it was only on British insistence that the royal authority was formally inserted. Mr. Cosgrave worked indefatigably and with almost complete success to eliminate it. He severed all connexion, between the Civil Service, the Army 'and the Judiciary and the Crown, and reduced the position of Governor-General to that of a servant of the Free State Government. It was he who refused to allow_ the British Parliament to safeguard the treaty of 1921 in the Statute of Westminster, who nullified the appeal to the 'Privy Council, and who for party ends swept away the safeguard of the referendum for constitutional change.

The legality of all that has been done since by Mr. de Valera has been formally asserted by the Privy Council in Moore Attorney-General for the Irish Free State, on which I commented in your issue of June 21st, 1985. Nothing can be more humiliating than the position of the Governor-General as matters now stand. Debarred from participation in any- State ceremonial, his one function is on instructions to sign Bills. Mr. de Valera is acting most wisely in deciding to terminate a painful farce, and to remedy a grave defect in the con- stitution. He has xeali3ed, as has recently been realised by Mr. Justice Evatt in Australia, that the decision of the Imperial Conference of 1980, which destroyed the authority of the Governor-General by making him the nominee of the Dominion Government, completely destroyed the legitimate influence of the Crown as charged with the function of pro- tecting the interests of the people from undue exercise. of power by the Ministry of the day, and gave to .Dominion Ministries a plenitude of unfettered power which would be deeply resented if it existed in the United Kingdom. In proposing that the head of the State should be elected and have certain powers apart from ministerial advice, Mr. de Valera is repairing a grave error and according a much-needed safeguard. In the same way it is all to the good thathe intends to give to the people the protection of the referendum agains'.; rash' constitutional change, "of which Mr. Cosgrave without warriag deprived them.

For Britain to object to these changes would be equally unwise and futile. What. is essential is the relation of the Free State to Britain in external affairs, and in this matter Mr. de Valera's moderation is admirable. The Privy Council decision left it open -to him to confer on the head of the State the right to exercise every attribute of external

sovereignty, as General Hertzog with the permission of his late Majesty has conferred the right on the Governor-General of the Union of South Africa. If this were done, the Free state would have been for every purpose wholly independent of the personal action of the King, and separation would be a fait accompli. Instead, Mr. de Valera has referred pointedly to the precedents of Canada, Australia and New Zealand, by which royal action for the highest international acts is still fully respected. He has, therefore, deliberately left open the possibility Of securing, what. he suggested in 1921, complete internal sovereignty with co-operation in external affairs with the British Commonwealth. Is this to be sacrificed from pique, or will our politicians add distinction to the coronation by securing before it a real accord with the Free State?. • ' It will, of course, be argued that Mr. de Valera will accept. nothing without the surrender of Northern Ireland ; the sufficient answer is that no offer on the main issue has been made to him. It will also be argued that he has broken faith over the annuities. The answer is that no judicial tribunal has determined the issue, that Mr. de Valera has offered to accept an international tribunal's decision, and that his case is capable of such strong argument that the British refusal to agree is probably wise. In the changed state of European affairs and the severe blow to British security from Italian ambitions and the revival of German militarism, the restoration of full relations with the Free State would be well