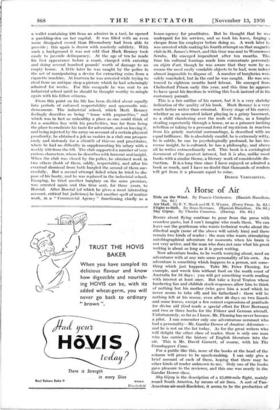 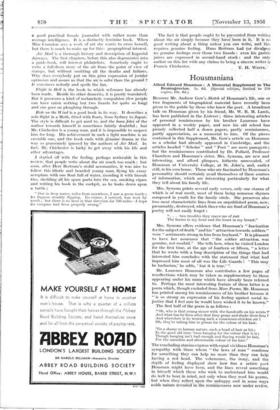 A Horse of Air

Air Mail. By F. V. Monk and H. T. Winter. (Percy Press. 3s. 6d.) Flight to Hell. By Hans Bertram. (Hamish Hamilton. 10s. 6d.) Sky Gipsy. By Claudia Cranston. (Harrap. 10s. (id.) Booxs about flying continue to pour from the press with ceaseless gusto, but I can't imagine who reads them. We can leave out the gentleman who wants techniCal works about the dihedral angle (none of the above will satisfy him) and there remain two kinds of reader : the man who wants stimulating autobiographical adventure for moments when his brain is not very active, and the man who does not care what his great writing is about so long as it is great writing.

Now adventure books, to be worth worrying about, need an adventurer with at any rate some personality of his own. An adventure is something which happens to a person, not some- thing which just happens. Take Mr. Peter Fleming, for example, and wreck him without food on the north coast of Australia for 53 days ; you will get something worth reading with interest at least once. But take a loyal Teuton whose lumbering fun and childish stock-responses allow him to think

of nothing but his mother (who gave him a scarf which he never seems to take off) and his fatherland : there will be nothing left at his rescue, even after 40 days on two lizards and some leaves, except a few correct expressions of gratitude for divine aid (God made a special effort for Herr Bertram) and two or three hochs for the Fiihrer and German aircraft. Unfortunately, so far as I know, Mr. Fleming has never become a pilot. I can remember only one adventurous. aeronaut who

had a personality—Mr. Gandar Dower of Amateur Adventure— and he is not on the list today. As for the great writers who will delight the other class of reader, there is only one man who has carried the history of English literature into the air. This is Mr. David Garnett, of course, with his The Grasshoppers Come.

For a public like this, none of the books at the head of the column will prove to be epoch-making. I can only give a brief account of each of them, hoping that there may be other kinds of reader unknown to me: Only one of the books gave pleasure to the reviewer, and this one was nearly in the Gandar Dower class.

Sky Gipsy is the description of a 25,000-mile flight, mainly round South America, by means of air lines. A sort of Pan- ' American-air-mail-Baedeker, it seems to be the production of

a good practical female journalist with rather more than average intelligence. It is a distinctly feminine book. When Miss Cranston sees a work of art she wants to cross herself, but there is much to make up for this : geographical interest.

Air Mail is a thorough history and description of -Imperial Airways. The first chapters, before this also degeneratA.into. a guide-book, will interest philatelists. Somebody ought to write a full-dress story of the air from the point of view of stamps, but without omitting all the deaths and failures. Why does everybody put on this grim expression of jocuiat optimism and assure us that the air is safer than the ground

It convinces nobody and spoils the fun. .

Flight to Hell is the book to which reference has alreadY. been made. Beside its other demerits, it is poorly translated:' BUt it possesses a kind of melancholy compulsion (few People. can have eaten nothing but two lizards fox' quite so long)

and one goes on ploughing through.

Ride on the Wind is a good book in its way. It deseribes solo flight in a Moth, fitted with floats, from Sydney to 'Japan: The style is difficult to get used to,- and the bona fidei of the author' towards himself_ is sometimes faintly doubtful ; but Mr. Chichester is a young man, and it is impossible to suspect him for long. His achievementin such a light machine is an enviable one, and the book ends with 'den-nine' drama in the way so gruesinnelY ignored by the authors of Air Mail. In fact, Mr. Chichester is hicky to get -away' with his life and

I started off with the feeling, perhaps noticeable in this review, that people write about the air much too much ; but soon, after Herr Bertram's stolid aeronautics, it was nice to follow this idiotic and bearded young Man, flying his crazy aeroplane with one float full of water, Mending it with biscuit tins, shedding all his spare parts'into the sea, smoking cigars and writing his book in the cockpit, as he looks down upon a turtle : " Out in deep water, miles from anywhere, I saw a green turtle ; its flippers steadily flipping. Its course, I noticed, was west by north ; but there is no land in that direction for 700 miles—I hope its compass had been properly swung." The fact is that people ought to be prevented from writing about the air simply because they have been in it. It is no good writing about a thing unless you can write, and this requires genuine feeling. Hans Bertram had- (or divulges) no genuine feelings over-those two lizards : even his gastric juices are expressed in second-hand stock : and the only authcir on this list with any claims to being a sincere writer is