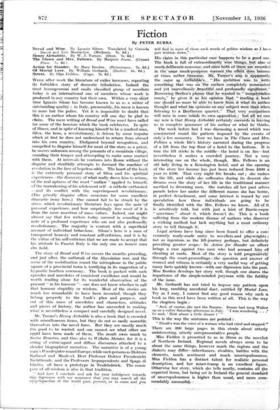 Action for Slander. By Mary Borden. (Heinemann. 7s. 6d.) Of Mortal Love. By William Gerhardi. (Barker. 8s. 6d.) tress. By Olga Fielden. (Cape. 7s. 6d.) WEEK after week the literature of exiled increases, repeating ifs forbidden story of domestic tribulation. Indeed the most homogeneous and easily classified group of novelists today is an international one of members whose work' is produced in any country but their own. Within a very short time Ignazio Saone has become known to us as a writer of Outstanding quality ; in Italy, presumably, his name is known to none but the police. Yet it is impossible to doubt that this is an author whom his country will one day be glad to claim. The mere writing of Bread and Wine must have called for some of the heroism which the book celebrates. In spite of illness, and in spite of knowing himself to be a marked man, , Silva, the hero, a revolutionary, is driven by some impulse Which at first he does not understand to return from abroad into his own country. Disfigured beyond recognition, and compelled to disguise himself for most of the story as a priest, he moves unknown among the peasants of a mountain village, sounding their temper and attempting to make some contact with them. At intervals he ventures into Rome without the disguise and stealthily attempts to forward the machine-of revolution in the face of hopeless odds. The heart of the boOk i4- the extremely personal story of Silva and his spiritUal experiences—the discovery of what really drove him to return, of the real aptness of the word " outlaw " applied to himself, oi-the reawakening of his adolescent self—a catholic enthusiast —and its conflict with the superimposed revolutionary. (The priestly disguise offers occasions for some excellent dramatic irony here.) One cannot fail to be struck by the stress which revolutionary literature lays upon the note of personal experience, and how surprisingly free most of it is fiom the mere assertion of mass values. Indeed, one might almost say that few writers today succeed in sounding the note of a profound experience who are not also professedly revolutionary. The majority is content with a superficial account of individual behaviour. Silone's hero is a man of transparent honesty and constant self-criticism, and it is by the virtue of his self-criticism that we are made to accept that his attitude to Fascist Italy is the only one an honest man vim hold.

The story of Bread and Wine covers the months preceding, and just after, the outbreak of the Abyssinian war, and the scene of the mobilisation round the microphone in the public square of a provincial town is terrifying in its suggestion of a hypnotic heathen ceremony. The book is packed with such episodes and anecdotes of consistent excellence and would be worth reading alone for its wonderful observation of the peasant " in his humour "—one does not know whether to call that humour stupidity or wisdom. Most of the stories are much too remarkable to have been invented, though they licking properly to the book's - plan and purpose, and out of this mass of anecdotes and characters, attitudes and pieces of history, the author has succeeded in making what is nevertheleSs a compact and carefully designed novel.

Mr. Turner's Henry Airbubble is also a book that is crowded with miscellaneous items, but they do not so easily assemble themselves into the novel form. But they are mostly much the good to be wasted, and one cannot see what other use could have been made of them. The result owes much to Senior Resartus, and thus also to Wilhelm Meister, for it is a string of extravagant and diffuse discourses attached to a slender biographical narrative. The narrative is of a young man's Tianderjahre round Europe; while such persons as Doktors Kalbesel and Maulesel, Herr Professor Doktor Freudenicht Nichtfreude, and the Professors Acquapendente and Spaga di Ghetto, all have a prototype in Teufelsdrikk. The comic pose of all-wisdom is also in that tradition.

And here I conclude and ask for your indulgence towards this digression with my assurance that you may search all the encyclopaedias of the world past, present, or to come and you will find in none of these such words of golden wisdom as I have

His claim in this particular case -happens to be a good one. The bOok is full of extraotdinarlly wise -things, but also of much deliberatenonsense, andsinee both of theSeare recorded in the:same mock=poniPoils manner-,the effect-does become at times rather_tireiorne. mi. Turner's aini is ,apparently . . . . . . • . the ,same Airhubble's., "His ambition was, to write Something that was on 'the surface .completely nonsensical and yet_ marvellously "beautiful, and.in.ofoundly significant." BorroWing-Berlioz'S phrase that be wanted to_" rrmpsterishsc music,," he gives it as his opinion Tttuit " reading- a book One should no more be able to knoiv,frin it what-its author thought staid what his opinions on any were theft when listening . to a kleethoven quartet." That very _comparison will raise in some minds its own opposition ; but all we' can say now is that Henry AirlMbble certainly'succeeds in reeving us in complete ignorance of his author or what he thinks.

The week before last I was discussing a navel which was constructed round the pattern imposed by the events of Only:a few moments. Now we have in The Clown and Mrs. Fellows a whole life's history narrated during the progress of a lift from the top floor of a hotel to the bottom. It is true the lift sticks in the middle—the hotel is on Are—but nevertheless it makes a crowded journey. Not a very interesting one on the whole, though. Mrs. Fellows -is an old lady living in a Kensington hotel, and at the opening Of the story her income has just been reduced from £300 a year to £100. That very night fire breaks out ; she rushes to the lift, and while she suffocates during its descent she dreams over the story of her life in the traditional manner: ascribed to drowning men. She watches all her past selves: parade below her under the different names she has borne, in perfect detachment, and some interest is roused by our speculation how these individuals are going to be finally identified with the Mrs. Fellows we know. All of it. is Sensitively told, but with just a hint of Barrie-esque " queerness " about it, which doesn't do. This is a book suffering from the modern disease of authors who discover a striking method, but lack anything but. a most ordinary

. Legal actions have long since been found to offer a con- veniently ready-made unity to novelists and playwrights ; not so ingenious as the lift-journey -perhaps, but definitely providing greater scope.— In Action lor Slander an officer brings a case against two men who had accused hip; 205 cheating at cards. Most of the story is told progreigively through the court-proceedings--the question and answer of counsel and witness is certainly # very useful way of getting many facts quickly known—with one digression into the past. Miss Borden. develops her story well, though one shares the impatience of the simple-minded juryman with the futility of the issue.

Mr. Gerhardi has not tried to impose any pattern upon his long, rambling anecdotal duet, entitled Of Mortal Love. Try as I may, I cannot find any good reason why such a book as this need have been written at all. This is the way the chapters begin :

" And, of course, she met the Bonzes. Bonzo had rung Walter up on a sultry Saturday afternoon in July. ' I was wondering . . he said, How about a little dinner 1 ' "

This is the way the sentences are pointed : " Dinah's was the voice of a woman who had cried and stopped." There are 300 large pages in this strain about utterly uninteresting, utterly unrepresentative people.

Miss Fielden is presented to us in 'Stress as the novelist of Northern Ireland. Regional novels always seem to be about the same things, however much the regions and the dialects may differ—inheritances, rivalries, battles with the elements, much sentiment and much unscrupulousness. Miss Fielden has a- distinct talent for realistic personal description, and her miser-tramp is an -excellent figure. Otheirwise her story, which she tells neatly, contains all the expected items, but being set in Ireland the general staadeird of unscrupulousness is higher than usual, and more com- mendably successful.. -