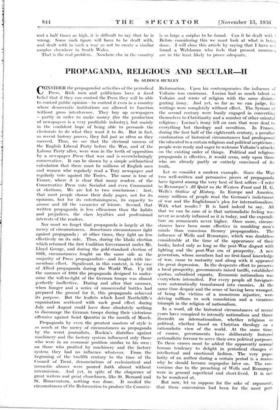 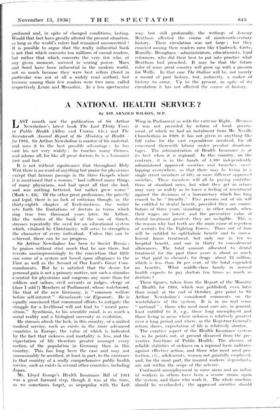 CONSIDER the propagandist activities of the periodical Press. Rich men and politicians have a fixed belief that if they can control the Press they will be able to control public opinion—to control it even in a country where democratic institutions are allowed to function without gross interference. They buy up newspapers —partly in order to make money (for the production of newspapers is a very profitable industry), but mainly in the confident hope of being able to persuade the electorate to do what they want it to do. But in fact, as recent history. proves, they fail just as often as they succeed. Thus, we see that the electoral success of the English Liberal Party before the War, and of the Labour Party after, were won in the teeth of opposition by a newspaper Press that was and is overwhelmingly conservative. It can be shown by a simple arithmetical calculation that there must be millions of English men and women who regularly read a Tory newspaper and regularly vote against the Tories. The same is true of France, where it is clear that many readers of the Conservative Press vote Socialist and even Communist at elections. We are led to two conclusions : first, that most people choose their daily paper, not for its opinions, but for its entertainingness, its capacity to amuse and fill the vacancies of leisure. Second, that written propaganda is less efficacious than the habits and prejudices, the class loyalties and professional interests of the readers.

Nor must we forget that propaganda is largely at the mercy of circumstances. Sometimes circumstances fight against propaganda ; at other times, they fight no less effectively on its side. Thus, during the khaki election which returned the first Coalition Government under Mr. Lloyd George, and during the gold-standard election of 1931, circumstances fought on the same side as the majority of Press propagandists—and fought with tre- mendous effect. Significant, in this context, is the case of Allied propaganda during the World War. Up till the summer of 1918 the propaganda designed to under- mine the will-to-fight of the German troops was ahnOst perfectly ineffective. During and after that summer, when hunger and a series of unsuccessful battles had prepared the ground for it, this. propaganda achieVed its purpose. But the leaflets which Lord Northcliffe's organisation scattered with such good effect during July and August could have done absolutely nothing to discourage the German troops during their victorious offensive against Saint Quentin in the month of March.

Propaganda by even the greatest masters of style is as much at the mercy of circumstances as propaganda by the worst journalists. Ruskin's diatribes against machinery and the factory system influenced only those who were in an economic position similar to his own ; on those who profited by machinery and the factory system they had no influence whatever. From the beginning of the twelfth century to the time of the Council of Trent, denunciations of ecclesiastical and monastic abuses were poured forth almost without intermission. And yet, in spite of the eloquence of great writers and great churchmen, like St. Bernard and St. Bonaventura, nothing was done. It needed the circumstances of the Reformation to produce the Counter- Reformation. Upon his contemporaries the influence of Voltaire was enormous. Lucian had as much talent as Voltaire and wrote of religion with the same disinte- grating irony. And yet, so far as we can judge, his writings were completely without effect. The Syrians of the second century were busily engaged in converting themselves to Christianity and a number of other oriental religions ; Lucian's irony fell on ears that were deaf. to everything but theology and occultism. In France, during the first half of the eighteenth century, a peculiar combination of historical circumstances had predisposed the educated to a certain religious and political scepticism ; people were ready and eager to welcome Voltaire's attacks on the existing order of things. Political and religious propaganda is effective, it would seem, only upon those who arc already partly or entirely convinced of its truth.

Let us consider a modern example. Since the War two well-written and persuasive pieces of propaganda have figured among the very best of best sellers—I refer to Remarque's All Quiet on the Western Front and H. O. Wells's Outline of History, In Europe and America, many millions of people read the German's indictment of war and the Englishman's plea for internationalism. With what results ? It is hard indeed to say. All that we can be sure of is that nationalistic feeling was never so acutely inflamed as it is today, and the expendi- ture on armaments never higher. Once more, circum- stances have been more effective in moulding men's minds than conscious literary propagandists. The influence of Wells and Remarque, which was doubtless considerable at the time of the appearance of their books, lasted only as long as the post-War disgust with fighting and the post-War era of prosperity. A new generation, whose members had no firSt-hand knowledge of war, came to maturity and along with it appeared the great depression. In the desperate effort to preserve a local prosperity, gOvernMents raised tariffs, established quotas, subsidised exports. Economic .nationalism was everywhere intensified. For every people all foreigners were automatically transformed into enemies. At the same time despair and the sense of having been wrong- ed, of being the victims of a monstrous injustice, were driving millions to seek consolation and a vicarious triumph in the religion of nationalism.

In a word, all the historical circumstances of recent years have conspired to intensify nationalism and .throw discredit on internationalism, whether religious or political, 'whether based on Christian theology or a rationalistic view of the world. At the same time, of course, governments have deliberately fostered nationalistic fervour to serve their own political purposes. To theSe causes must be added the apparently normal human tendency to delight in periodical changes of intellectual and emotional fashion. - The very popu- larity of an author during a certain period is a reason why he should become unpopular later on. The con- versions due to the preaching of Wells and Remarque were in general superficial and short-lived. It is not to be wondered at.

But now, let us suppose for the sake of argument, that these conversions had been for the most part profound and, in spite of changed conditions, lasting. Would that fact have greatly altered the present situation, so long as the world's rulers had remained unconverted ? It is possible to argue that the really influential book is not that which converts ten millions of casual readers, but rather that which converts the very few who, at any given moment, succeed in seizing power. Marx and Sorel have been influential in the modern world. not so much because they were best sellers (Sorel in particular was not at all a widely read author), but because among their few readers were two men, called respectiely.:Lenin, and Mussolini. In a less spectacular way, but still profoundly, the writings of Jeremy Bentham affected the course of nineteenth-century history. Their circulation was not large ; but they counted among their readers men like Chadwick, Grote, Romilly, Brougham—administrators, educationists, legal reformers, who did their best to put into practice what Bentham had preached. It may be that the future ruler of some great country will grow up with a passion for Wells. In that case The Outline will be. not merely a record of past history, but, indirectly. a maker of history to conic. Up to the present, in spite of its circulation it has not affected the course of history.