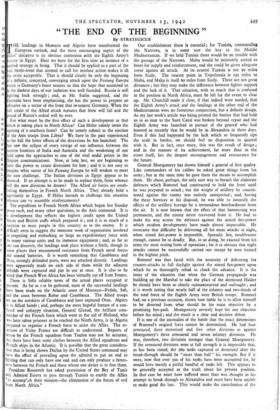 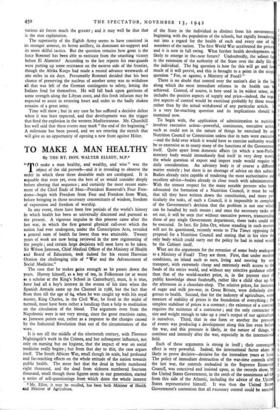 " THE END OF THE BEGINNING "

For what must be the first effect of such a development as that hich is taking place in North Africa? Can Hitler calmly await the opening of a southern front? Can he tamely submit to the ejection of the Axis troops from Libya? We have in the past experienced o the full the bitter effects of the diversions he has launched. The last saw the eclipse of every vestige of our influence between the astern frontiers of India and Australia and the weakening of our hold upon the approaches to one of the vital nodal points in the Empire communications. Now, at long last, we are beginning to have the power to create diversions for him ; and it is not easy to imagine what sector of his Festung Europa he will weaken to meet the new challenge. The Italian divisions in Egypt appear to be doomed. If an attempt is to be made to replace them, from whence will the new divisions be drawn? The Allied air forces are estab- lishing themselves in French North Africa. They already hold a superiority in Egypt. If Hitler intends to challenge this situation whence can he assemble reinforcements?

The expedition to French North Africa which began last Sunday poses such, and many other questions, to the Axis command. It is a development that reflects the highest credit upon the United States and British staffs which prepared it ; and it is as much of a surprise to most people in this country as to the enemy. It is difficult even to suggest the immense work of organisation involved in preparing and embarking so large an expeditionary force with its many various units and its immense equipment ; and, as far as one can discover, the landings took place without a hitch, though in some places they encountered resistance from French naval forces and coastal batteries. It is worth remarking that Casablanca and Oran, strongly defended ports, were not attacked directly. Landings were apparently made on each side of them while the adjacent airfields were captured and put in use at once. It is also to be noted that French West Africa has been virtually cut off from France.

There is little reliable news of the actual places occupied at present. As far as can be gathered, most of the successful landings have been made on the Atlantic coast of Morocco—Fedala, Safi, and the coast between Rabat and Casablanca. The Allied troops are on the outskirts of Casablanca and have captured Oran. Algiers is in Allied hands ; and, perhaps the most hopeful feature of a con- fused and unhappy situation, General Giraud, the brilliant com- mander of the French force which went to the aid of Holland, who was later taken prisoner as he reached the Ninth Army, is in Algeria Prepared to organise a French force to assist the Allies. The re- actions of Vichy France are difficult to understand. Reports of action by the French squadron from Toulon may not be accurate, but there have been some clashes between the Allied squadrons and French ships in the Atlantic. It is possible that the great considera- tion that is being shown Darlan by the United States command may have the effect of prevailing upon the admiral to put an end to fighting that can only have one end and can only produce a bitter- ness between the French and those whose one desire is to free them.

President Roosevelt has asked permission of the Bey of Tunis and Admiral Esteva to pass through Tunisia to enable the Allies " to accompt:sh their mission—the elimination of the forces of evil from North Africa."

Our establishment there Is essential; for Tunisia, commanding the Narrows, is in some sort the key to the Middle Mediterranean. If we held Tunisia there would be no trouble with the passage of the Narrows. Malta would be intimately united to bases for supply and reinforcement, and she could be given adequate cover against all attack. At its nearest Tunisia is not 90 miles from Sicily. The nearest point in Tripolitania is 195 miles to Malta, and Malta is itself 6o miles from Sicily. These are not great distances ; but they may make the difference between fighter support and the lack of it. That situation, with so much that is confused in the position in North Africa, must be left for the event to clear up. Mr. Churchill made it clear, if that indeed were needed, that the Eighth Army's attack and the landings at the other end of the Mediterranean were no fortuitous conjunction, but a definite design. As my last week's article was being printed the barrier that had held us in so near to the Suez Canal was broken beyond repair and the Eighth Army was launched in pursuit of the general who had boasted so recently that he would be in Alexandria in three days. Even if this had happened by the luck which so frequently tips the scale in battles, we should feel no disposition to quarrel with it. But in fact, once more, this was the result of design ; and in the manner of its achievement, far more than in the event itself, lies the deepest encouragement and reassurance for the future.

General Montgomery has shown himself a general of first quality.

Like commanders of his calibre he asked great things from his army ; but at the same time he gave them the means to accomplish them. He chose, perhaps, the only sure way to breach the elaborate defences which Rommel had constructed to hold the front until he was prepared to attack ; but the weight of artillery he concen- trated against the enemy was entirely unexpected ; and, having the three Services at his -disposal, he was able to intensify the effects of the artillery barrage by a tremendous bombardment from the air. It is now known that the effect of that hammering was permanent, and the enemy never recovered from it. He had to make his way across the defences against the aimed fire-power which modern developments have made almost impassable. He overcame that difficulty by delivering all his main attacks at night, when aimed fire-power is impossible. Sporadic fire, troublesome enough, cannot be so deadly. But, in so doing, he exacted from his army the most testing form of operation ; for it is obvious that night attacks cannot be successfully carried out except by men trained to the highest pitch.

Rommel was thus faced with the necessity of delivering his counter-attacks in full daylight against the aimed fire-power upon which he so thoroughly relied to check the advance. It is the irony of the situation that when the German propaganda was building up the Marshal to take the place of the dismissed Haider he should have been so clearly outmanoeuvred and outfought ; and it is worth noting that nearly half of the infantry and two-thirds of the total force of the Eighth Army were British troops. Rommel had, on a previous occasion, shown how liable he is to allow himself to be diverted from what should be his main objective by a promising bye-path. Montgomery severely kept his one objective before his mind ; and the result is a clear and decisive defeat.

It is one of the anomalies of the battle that the exact dimensions of Rommel's original force cannot be determined. He had four armoured, three motorised and five other divisions as against Montgomery's three armoured and seven infantry divisions. He was, therefore, two divisions stronger than General Montgomery. If the armoured divisions were at full strength it is impossible that, as has been stated, the 26o tanks captured or destroyed after the break-through should be "more than half" his strength. But if it were, now that over 500 of his tanks have been accounted for, he would have merely a pitiful handful of tanks left. This appears to be generally accepted as the truth about his present position. In that case he must have suffered more than was thought in his attempt to break through to Alexandria and must have been unable to make good the loss. This would make the contribution of the various air forces much the greater ; and it may well be that that is the true explanation.

The superiority of the Eighth Army seems to have consisted in its stronger armour, its better artillery, its dominant air-support and its more skilful tactics. But the question remains how great is the force Rommel has been able to extricate from the smashing victory before El Alamein? According to the last reports his rear-guards were putting up some resistance on the eastern side of the frontier, though the Afrika Korps had made a record advance westwards of 26o miles in six days. Presumably Rommel decided that his best chance of preserving the nucleus of another army was to withdraw all that was left of the German contingents to safety, letting the Italians fend for themselves. He will fall back upon garrisons of some strength along the Libyan coast, and this fresh infusion may be expected to assist in restoring heart and order to the badly shaken remains of a great army.

Time will show ; but in any case he has suffered a decisive defeat when it was least expected, and that development was the trigger that fired the explosion in the western Mediterranean. Mr. Churchill has well said that these events may mark " the end of the beginning." A milestone has been passed, and we are entering the stretch that will give us an opportunity of opening a new front against Hitler.