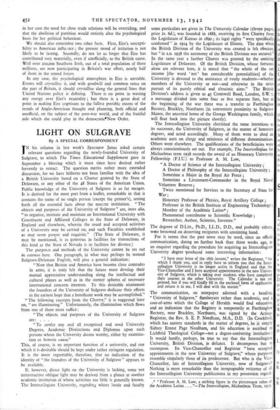 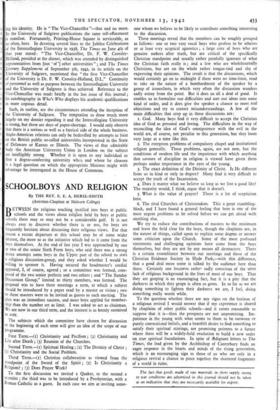 By A SPECIAL CORRESPONDENT

TN his column in last week's Spectator Janus asked certain relevant questions regarding the newly-founded University of Sulgrave, to which The Times Educational Supplement gave in September a blessing which it must since have desired rather fervently to retract. The question merits rather more extended discussion, for we have hitherto not been familiar with the idea of a British University based on a Charter granted by the State of Delaware, or any other of the 48 States of the American Union. Public knowledge, of the University of Sulgrave is so far meagre. It is derived for the most part from a leaflet, remarkable in that it contains the name of no single person (except the printer's), setting forth all the essential facts about the nascent institution. " The objects and purposes of the University of Sulgrave " are, inter alia, "to organise, institute and maintain an International University with Constituent and Affiliated Colleges in the State of Delaware, in England and elsewhere, wherein the usual and accepted activities of a University may be carried on, and such Faculties established as may seem proper and requisite." (The State of Delaware, it may be mentioned, is as generous in facilities for transactions of this kind as the State of Nevada is in facilities for divorce.) The purposes and methods of the University cannot be set out in extenso here. One paragraph, in what may perhaps be termed Sulgrave-Delaware English, will give a general indication:

" Now that Britain and America have become close comrades in arms, it is truly felt that the future must develop their mutual appreciative understanding along the intellectual and cultural planes as well as in the sterner spheres of necessary international concrete interests. To this desirable attainment the founders of the University of Sulgrave dedicate their efforts in the earnest hope that a beneficent work may be accomplished."

"The following excerpts from the Charter," it is suggested later on, " are illuminating." Unfortunately, the illumination which flows from one of them must suffice: "The objects and purposes of the University of Sulgrave are: . . .

"To confer any and all recognised and used University Degrees, Academic Distinctions and Diplomas upon such persons whom the University deems worthy, either by examina- tion or honoris causa."

This, of course, is an important function of a university, and one which it is desirable should be kept under rather stringent regulation. It is the more regrettable, therefore, that no indication of the identity of " the founders of the University of Sulgrave" appears to be available.

If, however, direct light on the University is lacking, some not uninstructive oblique light may be derived from a glance at another academic institution of whose activities too little is generally known. The Intercollegiate University, regarding whose locale and faculty

some particulars are given in The University Calendar (eleven pages, price 2S. 6d.), was founded in 1888, receiving its first Charter from

but "in A.D. 1938 the autonomy of the British Division was secured."

In the same year a further Charter was granted by the untiring Legislature of Delaware. Of the British Division, whose fortunes alone are relevant here, it is stated that " the whole of the net income [the word ` net ' has considerable potentialities] of the University is devoted to the assistance of needy students—whether members of the University or not—and otherwise in the strict pursuit of its purely ethical and altruistic aims." The British Division's address is given as 45 Cromwell Road, London, S.W.7, a messuage divided into some four or five separate flats, but at the beginning of the war there was a transfer to Farthinghoe Rectory, Brackley, Northants (in convenient proximity to Sulgrave Manor, the ancestral home of the George Washington family, which will float back into the picture shortly).

The Intercollegiate University cherished the same intentions as its successor, the University of Sulgrave, in the matter of honorary degrees, and acted accordingly. Many of them went to shed an academic aura on clergy and ministers of different denominations.

Others went elsewhere. The qualifications of the beneficiaries were always conscientiously set out. For example, The Intercollegian for

Michaelinas term 1938 records the award of an Honorary University Fellowship (F.I.U.) to Professor A. M. Low, " A Doctor of Science of the Intercollegiate University ;' A Doctor of Philosophy of the Intercollegiate University ; Sometime a Major in the Royal Air Force ; Sometime a Lieutenant-Commander in the Royal Naval Volunteer Reserve; Twice mentioned for Services to the Secretary of State for War ; Honorary Professor of Physics, Royal Artillery College ; Professor in the British Institute of Engineering Technology ; Member of the Academie Latine*; Phenomenal contributor to Scientific Knowledge ; Researcher, Author, Scientist, Inventor."

The degrees of D.Litt., Ph.D., LL.D., D.D., and probably others, we bestowed on deserving recipients with unstinting hand.

For it seems that the past tense may be used, since an official communication, dating no further back than three weeks ago, to an enquirer regarding the procedure for acquiring an Intercollegiate University degree produced some interesting information:

" I have your letter of the r8th instant," writes the Registrar, " for which I thank you, and in reply have to inform you that the Inter- collegiate University is no longer active in England and that the Vice-Chancellor and I have accepted appointments in the new Univer- sity of Sulgrave, which is taking over students who have completed their courses in the other University. The Calendar is not yet printed, but if you will kindly fill in the enclosed form of application and return it to me, I will deal with the matter."

The communication, on notepaper adorned with a heading, "University of Sulgrave," flamboyant rather than academic, and a coat-of-arms which the College of Heralds would find educative, and an indication that the Registry is temporarily at Farthinghoe Rectory, near Brackley, Northants, was signed by the Acting- Registrar, the Rev. S. E. P. Needham, MA, D.D. (In Crockford, which has austere standards in the matter of degrees, he is simply Sidney Ernest Page Needham, and his education is ascribed to Lichfield Theological College—not a degree-conferring institution.) It would hardly, perhaps, be true to say that the Intercollegiate University, British Division, is defunct. It decomposes but to recompose. Its Vice-Chancellor and Registrar " have accepted appointments in the new University of Sulgrave," whose purposes resemble singularly those of its predecessor. But who is the Vice- Chancellor, late of Intercollegiate University, now of Sulgrave?

Such, in outline, are the circumstances attending the inception of the University of Sulgrave. The temptation to draw much more largely on my dossier regarding it and the Intercollegiate University is strong, but these are days of paper-shortage. I would only observe that there is a serious as well as a farcical side of the whole business. Anglo-American relations can only be bedevilled by attempts to foist on the British public so-called universities incorporated in the State of Delaware or Kansas or Illinois. The views of that admirable body the American University Union in London on the subject are intelligibly strong. Whether it is open to any individual to float a degree-conferring university when and where he chooses is a legal question on which the appropriate Minister might with advantage be interrogated in the House of Commons.