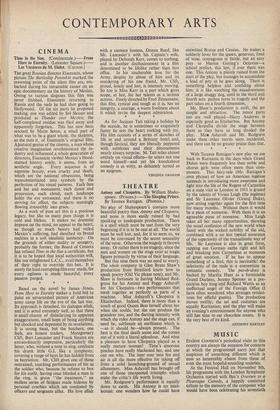 Time in the Sun. (Continentale.)—From Here to Eternity. (Leicester Square.)— Les Vacances de M. Hulot. (Curzon.) THE great Russian director Eisenstein, whose picture The Battleship Potemkin marked the crowning point of the silent film era, em- barked during his intractable career on an epic documentary on the history of Mexico. Owing to various disputes this film was never finished, Eisenstein returning to Russia and the reels he had shot going to Hollywood. Of the six parts he proposed making, one was edited by Sol Slessor and produced as Thunder over Mexico; the half-completed residue was filed away and apparently forgotten. This has now been rescued by Marie Seton, a small part of what was to be a giant whole, the skeleton, as she puts it, of Eisenstein's original film. Ajnatural genius of the cinema, a man whose creative imagination revolutionised the in- dustry and influenced a whole generation of directors, Eisenstein viewed Mexico's blood- stained history solely, it seems, from an aesthetic angle. Every sequence is of supreme beauty, even cruelty and death, which are the national obsessions, being transubstantiated into symbols by the perfection of his visual patterns. Each face and hat and monument, each dance and procession, each cloud, each landscape holds the eye entranced, and there is no striving for effect, the subjects seemingly flowing irresistibly into grace. , As a work of pure art this is a precious legacy, but like so many pure things it is cold and lifeless. It makes no dramatic impress on the mind, no appeal to the heart, as though so much beauty had veiled Mexico's suffering, had sheathed its brutal realities in a soft idealistic lambency. On the grounds of either nudity or savagery, probably the former, the Board of Censors has refused Time in the Sun a certificate, but it is to be hoped that local authorities will, like our enlightened L.C.C. avail themselves of their right to override this ban. It is surely the least corrupting film ever made, for every ugliness is made beautiful, every passion purged.

Based on the novel by James Jones, From Here to Eternity makes a bold bid to paint an unvarnished picture of American army camp life on the eve of the last war. Its approach is detached, its dialogue adult, and it is acted extremely well, so that there is small chance of disbelieving its apparent exaggerations, small hope of being anything but shocked and depressed by its revelations. It is strong Meat, but the butchers, one feels, are honest traders. Montgomery Clift, Burt Lancaster and Frank Sinatra are extraordinarily impressive, particularly the latter, who, without a note to sing, conducts his drunk little G.I. like a symphony, covering a range of keys he has hidden from us heretofore. Mr. Clift gives one of those restrained, touching performances of his as the soldier who, because he refuses to box for his outfit, having once blinded a man in the ring, is given "the treatment," an endless series of fatigues made hideous by personal cruelties which are condoned by officers and sergeants alike. His love affair with a canteen hostess, Donna Reed, like Mr. Lancaster's with his Captain's wife, played by Deborah Kerr, comes to nothing, and is another disillusionment in a film determined to be lifelike rather than box office. In his unalterable love for the Army, despite its abuse of him and its murdering of his one friend, Mr. Clift, proud, lonely and lost, is intensely moving. So too is Miss Kerr in a part which gives scope, at last, for her talents as a serious actress. Finely directed by Fred Zinnemann, this film, cynical and tough as it is has an integrity, a courage, a warm liveliness about it which invite the deepest admiration.

As for Jacques Tati taking a holiday by the seaside, he is sometimes so exquisitely funny he sets the heart rocking with joy. His film consists of a series of sketches of life in and around a Brittany hotel, and, though farcical, they are liberally peppered with subtleties and their denouements nearly always surprise. M. Tati relies almost entirely on visual effects—he utters not one word himself—and yet his knockabout comedy is as witty, as delicately turned as an epigram.