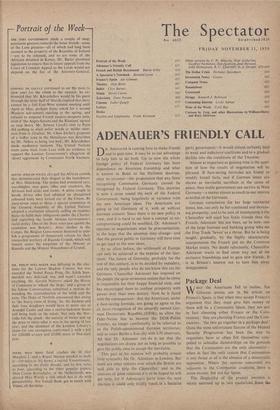 DR. ADENAUElt is coming here to make friends and to gain time. It may be to our advantage to help him to do both. Up to now the whole foreign policy of Federal Germany has been dependence on American friendship and what is known in Bpnn as the Hallstein doctrine, after its inventor—the proposition that any State recognising Communist Germany cannot be • recognised by Federal Germany. This doctrine is now a stone round the neck of the Federal Government, being hopelessly at variance with the new American ideas. The Americans are going to rid Germany of it, with or without German consent. Since there is no new policy in view, and it is hard to see how a concept "so un- compromising could be modified, Dr. Adenauer's reaction to negotiations must be procrastination, in the hope that the situation may change—and that the general public in Germany will have time to get used to the new ideas, As so often before, the settlement of Europe can only be achieved at the expense of the Ger- mans. The future of Germany, probably for the rest of this century, is to be decided by outsiders; and the only people who do not know this are the Germans. Chancellor Adenauer has imposed on his people the quite erroneous notion that he alone is responsible for their happy financial state, and has encouraged them to confuse prosperity with power over their own destiny. Now he is faced with the consequences : that the Americans, under a face-saving formula, are going to agree to the de facto recognition of the absurdly named Ger- man Democratic Republic. (DDR); to allow the Oder-Neisse line to become the DDR-Polish frontier, no longer comfortably to be referred to as the Polish-administered German territories; and to make Berlin'a free city with UN observers. All that Dr. Adenauer can do is see that the negotiations are drawn out as long as possible to give the public time to accept the inevitable.

This part of his mission will probably arouse little sympathy for Dr. Adenauer in London. But there are other matters over which the British are well able to help the Chancellor; and in the interests of good relations it is to be hoped he will get help, for if Adenauer's party loses the next election it could only briefly result in a Socialist party government—it would almost certainly lead to weak and indecisive coalitions and to a gradual decline into the conditions of the Twenties.

Almost as important as gaining time is the ques- tion of how the results of negotiation will be phrased. If face-saving formulas are found to modify brutal facts, and if German losses are shown as inevitable sacrifices in the cause of peace, then stable government can survive in West Germany—a matter almost as much to our interest as to that of the Germans.

German consolation for her huge territorial losses, too, can only be her continued and increas- ing prosperity; and to be sure of maintaining it the Chancellor will need less fickle friends than the French. Adenauer has not been, up to now, one of the large business and banking group who see .the Free Trade 'Seven' as a threat. But he is being taught, gradually, by the highly idiosyncratic interpretation the French put on the Common Market treaty. No doubt reluctantly, Chancellor Adenauer wants to find some way out of his exclusive friendships and to gain new friends. It is in Britain's interest not to turn him away disappointed.