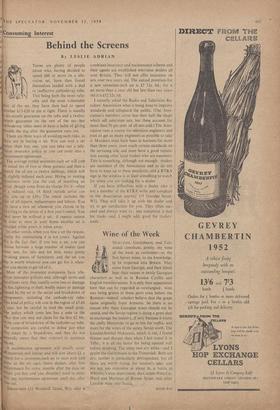 N.IUKL7ANI, Gurdzhaani, and •Tsin- andali constitute, jointly, my wine of the week as curiosities—as the first Soviet wines, to my knowledge, to be imported into Britain. They come from Georgia, and their labels bear. their names in twirly Georgian characters as well as in Russian Cyrillic and English transliterations. It is only their appearance here that can be regarded as newfangled: wine was being grown in those parts even before the Romans—indeed, scholars believe that the grape came originally from Armenia. So there is no reason why these Georgian wines should not be sound, and the Soviet regime is doing a great deal to encourage the industry, if only because it wants the chilly Muscovite to go in less for vodka, and more for the wines of the sunny Soviet south. The London-bottled Mukuzani, which is red, I found thinner and sharper than when I last tasted it in Tiflis: it is all the better for being opened Well before drinking. The other two are White—and I prefer the Gurdzhaani to the Tsinandali. Both are . dry, neither is particularly distinguished. but all three are worth trying, for interest's sake, and are not too expensive at about 8s. a bottle at Whiteley'S wine department, the Curzon Wine Co., Ward and Martinez of Brewer Street, and other London wine merchants.