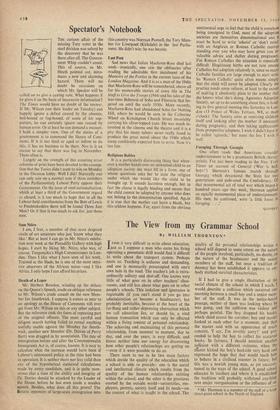 one saw the obituaries after reading the admirable first instalment of his Memoirs of the Forties in the current issue of the London Magazine. And it is as a man of the 1940s that Maclaren-Ross will be remembered, above all for his memorable stories of army life in The Stuff to Give the Troops (1944) and his tales of the War-time Bohemia of Soho and Fitzrovia that lin- gered on until the early 1950s. More recently, Maclaren-Ross had abandoned Soho for Notting Hill, where he would be seen in the Catherine Wheel on Kensington Church Street invariably carrying his silver-topped cane. He was much in- terested in the cinema and the theatre and it is a pity that his many talents never really fused to produce the great novel about the 1940s which many confidently expected him to write. Now it's too late.