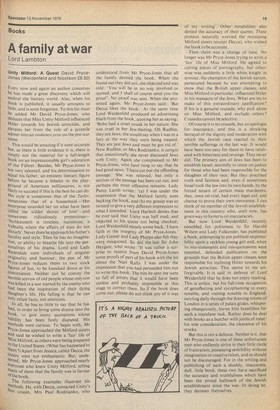 A family at war

Every now and again an author conceives he has made a great discovery which will enthral the literary world. Alas, when his book is published, it usually amounts to little, and is soon forgotten. To this list must be added Mr David Pryce-Jones, who deduces that Miss Unity Mitford influenced Hitler towards his Jewish atrocities, and elevates her from the role of a juvenile adorer into an eminence grise on the pre-war scene.

This would be amazing if it were accurate but, as there is little evidence it is, there is simply not the material for a full-length book on an impressionable girl's adoration of the Fijhrer. Besides, Mr Pryce-Jones is not very talented, and his determination to equal his father, an eminent literary figure before he became a bibelot in the playground of American millionaires, is not likely to succeed if this is the best he can do. His style is sometimes that of the Tatler, sometimes that of a housemaid—'Her enterprise stranded her on what have been called the wilder shores of love'—and sometimes ridiculously pretentiousAnchkenneth is timeless, numinous, a Valhalla where the affairs of man do not disturb'. Never does he approach his father's lucidity and style. Then he has no imagination, or ability to breathe life into the personalities of his drama. Lord and Lady Redesdale were individuals of singular originality and humour; the pen of Mr PrYce-Jones reduces them to two stock figures of fun, to be knocked down at his convenience. Neither can he convey the terrible sorrow of old people whose only son Was killed in a war started by the enemy who had been the inspiration of their dying daughter's life. His failing is that he can Only relate facts, not emotions.

In all, he has so little to say that he has had, in order to bring some drama into the hook, to give many quotations whose validity has been hotly disputed. His Methods were curious. To begin with, Mr PrYce-Jones approached the Mitford sisters and said he wished to write a 'fair' life of Miss Mitford, as others were being prepared in the United States. (What has happened to them ?)Apart from Jessica, called Decca, the sisters were not enthusiastic. But, undeterred, Mr Pryce-Jones approached nearly everyone who knew Unity Mitford, telling Many of them that the family was in favour of the book.

The following examples illustrate his Methods. He, with Decca, contacted Unity's first cousin, Mrs Paul Rodzianko, who understood from Mr Pryce-Jones that all the family desired the book. When she found out they did not, she objected and was told: 'You will be in no way involved .or quoted, and I shall of course send you the proof'. No proof was sent. When she protested again, Mr Pryce-Jones said: 'But Decca likes the book.' At the same time Lord Weidenfeld produced an advertising blurb from the book, quoting her as saying: 'Bobo had a cruel streak in her nature. She was cruel in her Jew-baiting. Oh Rudbin, they are Jews, she would say when I was in a fury at the way they were being treated. They are just Jews and must be got rid of.' Now Rudbin, or Mrs Rodzianko, is certain that intentionally she never discussed Jews with Unity. Again she complained to Mr Pryce-Jones, who later rang to say that he had good news. 'I have cut out the offending passage.' She was relieved, but only a section of the passage has been cut out, and perhaps the most offensive remains. Lady Pansy Lamb writes: la) I was under the impression that the Mitford family were backing the book, and (b) my gossip was so twisted to give a very different impression to what I intended.' Lord Harlech denies that he ever said that Unity was half mad, and objected to his quote not being checked; Lord Weidenfeld merely wrote back, 'I have faith in the integrity of Mr Pryce-Jones.' Lady Gainer and Lady Phipps also felt they were misquoted. So did the late Sir John Heygate, who wrote: 'It was rather a surprise to receive from David Pryce-Jones some proofs of part of his book with the bit about the Nazi Rally. I was under the impression that you had persuaded him not to write this book. The bits he sent me were so full of errors that it would have been useless and probably impossible at this stage to correct them. So if the book does come out, please do not think any of it was of my writing'. Other notabilities also denied the accuracy of their quotes. These protests naturally worried the remaining Mitford sisters (except Decca), who wished the book to be accurate.

Then there was a change of tune. No longer was Mr Pryce-Jones trying to write a 'fair' life of Miss Mitford. He agreed to cutting pieces of pornography, but otherwise -was suddenly a little white knight in armour, the champion of the Jewish nation, persecuted because he was attempting to show that the British upper classes, and Miss Mitford in particular, influenced Hitler in his massacre of the Jews. What are we to make of this extraordinary justification ? If his is a genuine crusade, why pick alone on Miss Mitford, and exclude others? Crusades cannot be selective.

Of course it is no crusade, but an apologia for inaccuracy, and this is a shocking betrayal of the dignity and moderation with which the Jewish race reacted to their terrible sufferings in the last war. It would have been too easy for them to have retaliated with bitterness and revenge. They never did. The primary aim of Jews has been to establish Israel. secondly to insist on justice for those who had been responsible for the slaughter of their race. But they practised truth and fairness and, even if sometimes Israel took the law into its own hands, by the forced return of certain mass murderers, they, once on trial, had every legal aid, and chance to prove their own innocence. I can think of no member of the Jewish establishment in this country who, until now, has given way to hysteria on inaccuracies.

But now Lord Weidenfeld, recently ennobled for politeness to Sir Harold Wilson and Lady Falkender, has published a book, attempting to pin political responsibility upon a reckless young girl and, when its mis-statements and mis-quotations were resented, defended publication on the grounds that the British upper classes were responsible for inclining Hitler towards his Jewish atrocities. This seems to me unforgivable. It is said in defence of Lord Weidenfeld that he does not enjoy reading. This is unfair, but his full-time occupation of genuflecting and sycophanting to every notable, and visiting notable in England, swirling daily through the drawing rooms of London in a series of palais glides, whispering obsequiously, leaves him breathless for such a mundane task. Rather does he deal with books as a butcher with joints of meat : his sole consideration, the clearance of his stocks.

But this is not a defence. Neither is it, that Mr Pryce-J ones is one of these unfortunate men who endlessly strive in their I ittle"circle of frustration, possessing sensibility without imagination or creative talent, and so should not be discouraged. For in the writing and publishing of such a shoddy, inaccurate, dull, little book, these two have sacrificed the accuracy and truthfulness which have been the proud hallmark of the Jewish establishment since the war. In doing so, they demean themselves.