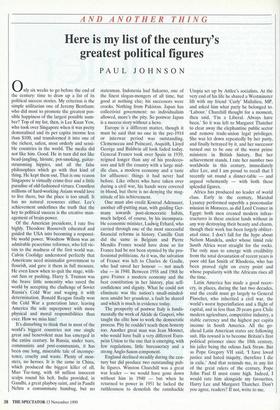 Here is my list of the century's greatest political figures

Only six weeks to go before the end of the century: time to draw up a list of its political success stories. My criterion is the simple utilitarian one of Jeremy Bentham: who did most to promote the greatest pos- sible happiness of the largest possible num- ber? Top of my list, then, is Lee Kuan Yew, who took over Singapore when it was pretty demoralised and its per capita income less than $100, and transformed it into one of the richest, safest, most orderly and sensi- ble countries in the world. The media did not like him. Good. He in turn did not like bead-jangling, hirsute, pot-smoking, guitar- strumming hippies, and all the false philosophies which go with that kind of thing. He kept them out. That is one reason Singapore is virtually crime-free and a little paradise of old-fashioned virtues. Countless millions of hard-working Asians would love to live there, but the place is too small. It has no natural resources either. Lee's achievement underlines the truth that the key to political success is the creative man- agement of brain-power.

Of the American presidents, I rate five highly. Theodore Roosevelt educated and guided the USA into becoming a responsi- ble world power. Woodrow Wilson was an admirable peacetime reformer, who fell vic- tim to the madness of the first world war. Calvin Coolidge understood perfectly that Americans need minimalist government to flourish, and gave it them in full measure. He even knew when to quit the stage, with- out fuss or pushing. Harry S. Truman was the brave little nonentity who saved the world by accepting the challenge of Soviet Russia's Cold War and waging it with determination. Ronald Reagan finally won the Cold War a generation later, leaving America the sole superpower with more physical and moral responsibilities than ever. How we miss him!

It's disturbing to think that in most of the world's biggest countries not one single great and benevolent man has emerged in the entire century. In Russia, under tsars, communists and post-communists, it has been one long, miserable tale of incompe- tence, cruelty and waste. Plenty of mon- sters, no heroes. It is the same in China, which produced the biggest killer of all, Mao Tse-tung, with 60 million innocent scalps round his belt. India provided, in Gandhi, a great playboy saint, and in Pandit Nehru a consummate humbug, but no statesman. Indonesia had Sukarno, one of the finest slogan-mongers of all time, but good at nothing else; his successors were crooks. Nothing from Pakistan. Japan has collectivist government: no individualism allowed, more's the pity. So postwar Japan is a success story without a hero.

Europe is a different matter, though it must be said that no one in the pre-1914 or interwar period was outstanding. Clemenceau and Poincare, Asquith, Lloyd George and Baldwin all look faded today. General Franco took over Spain in 1939, reigned longer than any of his predeces- sors and left the country with a large mid- , dle class, a modern economy and a taste for affluence: things it had never had before. Like others who have taken over during a civil war, his hands were covered in blood, but there is no denying the mag- nitude of his achievement.

One must also credit Konrad Adenauer, another off-putting man, with guiding Ger- many towards post-democratic habits, much helped, of course, by his incompara- ble economic minister, Ludwig Erhard, who carried through one of the most successful financial reforms in history. Camille Gutt did the same in Belgium and Pierre Mendes France would have done so for France had he not been stymied by the pro- fessional politicians. As it was, the salvation of France was left to Charles de Gaulle, who had saved her honour -- not much else — in 1940. Between 1958 and 1968 he gave France a modern economy and the best constitution in her history, plus self- confidence and dignity. What he could not eliminate was the nation's small-minded- ness amidst her grandeur, a fault he shared and which is much in evidence today.

The prosperity of postwar Italy is funda- mentally the work of Alcide de Gasperi, who taught the elite how to work the democratic process. Pity he couldn't teach them honesty too. Another great man was Jean Monnet, who would have built a very different Euro- pean Union to the one that is emerging, with few regulations, little bureaucracy and a strong Anglo-Saxon component.

England declined steadily during the cen- tury but did produce two outstanding pub- lic figures. Winston Churchill was a great war leader — we would have gone down without him in 1940 — but when he returned to power in 1951 he lacked the ruthlessness to demolish the ramshackle Utopia set up by Attlee's socialists. At the very end of his life he shared a Westminster lift with my friend 'Curly' Mallalieu, MP, and asked him what party he belonged to. 'Labour.' Churchill thought for a moment, then said, `I'm a Liberal. Always have been.' So it was left to Margaret Thatcher to clear away the elephantine public sector and remove trade-union legal privileges. She was let down repeatedly by her party, and finally betrayed by it, and her successor turned out to be one of the worst prime ministers in British history. But her achievement stands. I rate her number two worldwide in this century, immediately after Lee, and I am proud to recall that I recently sat round a dinner-table — and argued vehemently — with both these splendid figures.

Africa has produced no leader of world class. Early in the century, Marshal Lyautey performed superbly a proconsular mission in Morocco, as did Lord Cromer in Egypt: both men created modern infras- tructures in these ancient lands without in any way destroying their beauty and charm, though their work has been largely obliter- ated since. I don't fall for the hype about Nelson Mandela, under whose timid rule South Africa went straight for the rocks. The only man to emerge with credibility from the total devastation of recent years is poor old Ian Smith of Rhodesia, who has been proved right on every point and whose popularity with the Africans rises all the time.

Latin America has made a good recov- ery, in places, during the last two decades, and the credit must go largely to General Pinochet, who inherited a civil war, the world's worst hyperinflation and a flight of capital, and in less than 20 years gave Chile modern agriculture, competitive industry, a stable currency and the highest per capita income in South America. All the go- ahead Latin American states are following suit. His reward is to become Britain's first political prisoner since the 18th century, his jailer being the odious Jack Straw, But as Pope Gregory VII said, 'I have loved justice and hated iniquity, therefore I die in exile.' And that reminds me, in any list of the great rulers of the century, Pope John Paul II must come high. Indeed, I would rate him alongside my favourites, Harry Lee and Margaret Thatcher. Don't you agree, readers? If not, write to me.