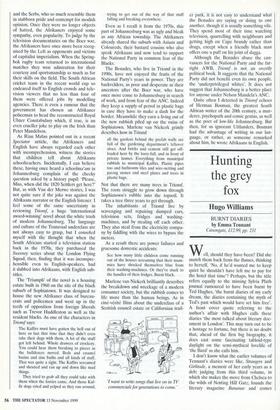 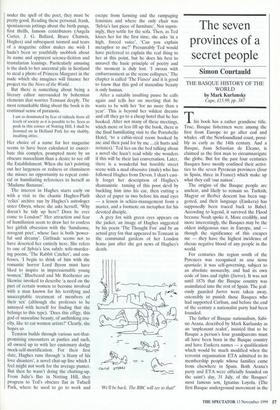 Hugo Williams BURNT DIARIES by Emma Tennant Canongate, £12.99, pp. 231 Well, should they have been? Did she snatch them back from the flames, thinking to herself, 'No, if he'd wanted me to keep quiet he shouldn't have left me to pay for the hotel that time'? Perhaps, but the title refers equally to the missing Sylvia Plath journal rumoured to have been burnt by Ted Hughes, 'the burnt diaries of my early dream, the diaries containing the myth of Ted's past which would have set him free'. A front cover quote referring to the author's affair with Hughes calls these diaries 'the most talked about literary doc- ument in London'. This may turn out to be a hostage to fortune, but there is no doubt that, ahead of the first big biography, it does cast some fascinating tabloid-type daylight on the semi-mythical lovelife of 'the Bard' as she calls him.

I don't know what the earlier volumes of Tennant's diaries were like, Strangers and Girlitude, a memoir of her early years as a deb; judging from this third volume, in which she makes the move from Chelsea to the wilds of Notting Hill Gate, founds the literary magazine Bananas and comes under the spell of the poet, they must be pretty good. Reading these personal, frank, spontaneous jottings about the birth pangs, first thrills, famous contributors (Angela Carter, J. G. Ballard, Bruce Chatwin, Hughes) and subsequent turmoil and tears of a magazine editor makes me wish I hadn't been so youthfully snobbish about its name and apparent science-ficition and trustafarian leanings. Particularly amusing is the dash to her ancestral pile in Scotland to steal a photo of Princess Margaret in the nude which she imagines will finance her project via the News of the World.

But there is something about being a literary editor surrounded by bohemian elements that worries Tennant deeply. The most remarkable thing about the book is its continual sense of paranoia.

I am as dominated by fear of ridicule from all levels of society as it is possible to be. Seen as posh in this corner of Notting Hill, I shall be frowned on in Holland Park for my shabby, insulting attire.

Her choice of a name for her magazine seems to have been calculated to exacer- bate this complex, prompted more by an obscure masochism than a desire to see off the Establishment. When she isn't pointing out her largeness or redness or clumsiness she misses no opportunity to repeat comi- cal or humiliating references to herself as 'Madame Bananas'.

The interest in Hughes starts early on with a visit to the chaotic Hughes-Plath 'relics' archive run by Hughes's astrologer sister Olwyn, where she asks herself, 'Why doesn't he tidy up here? Does he ever come to London?' Her attraction and fear of humiliation seem to draw her to confess her girlish obsession with the 'handsome, arrogant poet', whose face is both 'power- ful and dreamy'. Girlitude seems not to have deserted her entirely here. She refers to one of Sylvia's less subtle wife-murder- ing poems, 'The Rabbit Catcher', and con- fesses, 'I begin to think of him with the romantic horror Lord Byron must have liked to inspire in impressionable young women.' Bluebeard and Mr Rochester are likewise invoked to describe 'a need on the part of certain women to become involved with a man known for his terrifying and unacceptable treatment of members of their sex' (although she professes to be annoyed with herself for finding that she belongs to this type). 'Does this effigy, this god of masculine beauty, of unthinking cru- elty, like to eat women artists?' Clearly, she hopes so.

Tension builds through various not-that- promising encounters at parties and such, all owned up to with her customary dodgy mock-self-mortification. For their first date, Hughes runs through 'a litany of his love disasters', a novel chat-up line which I feel might not work for the average punter. But then he wasn't doing the chatting-up. From Julie's Bar in Notting Hill, they progress to Ted's obscure flat in Tufnell Park, where he used to go to work and

escape from farming and the rampaging feminists and where the only chair was 'Sylvia's last piece of furniture'. Not supris- ingly, they settle for the sofa. Then, as Ted kisses her for the first time, she asks 'in a high, forced voice', 'Can you explain metaphor to me?' Presumably Ted would have preferred to explain the real thing to her at this point, but he does his best to unravel the basic principle of poetry and the moment is duly lost. 'I swoon with embarrassment as the scene collapses.' The chapter is called 'The Fiasco' and it is good to know that this god of masculine beauty is only human.

After a suitably insulting pause he calls again and tells her on meeting that he wants to be with her 'for no more than a year'. This is beyond her wildest dreams and off they go to a cheap hotel that he has booked. After not many of these meetings, which more or less fill up the book, there is the final humiliating visit to the Portobello Hotel, `to a cabin-sized room booked by me and then paid for by me ...(it hurts and irritates).' Ted lies on the bed talking about a novel she hasn't read while she wonders if this will be their last conversation. Later, there is a wonderful but horrible street scene with a mad obsessive (male) who has followed Hughes from Devon. I shan't easi- ly forget her description of Hughes's shamanistic taming of this poor devil by buckling him into his car, then cutting a sheet of paper in two before his mad eyes — a lesson in schizo-management from a master, and a footnote on metaphor for his devoted disciple.

A grey fox with green eyes appears on the jacket, an image of Hughes suggested by his poem 'The Thought Fox' and by an actual grey fox that appeared to Tennant in the communal gardens of her London home just after she got news of Hughes's death.