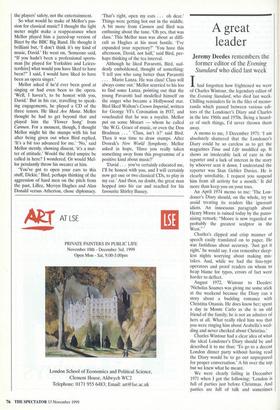 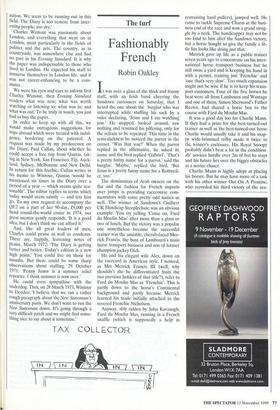 Jeremy Deedes remembers the former editor of the Evening Standard who died last week Ihad forgotten how frightened we were of Charles Wintour, the legendary editor of the Evening Standard, who died last week. Chilling reminders lie in the files of memo- randa which passed between various edi- tors of the Londoner's Diary and Charles in the late 1960s and 1970s. Being a hoard- er of such things, I'd never thrown them away. A memo to me, 3 December 1971: 'I am absolutely shattered that the Londoner's Diary could be so careless as to get the magazines Time and Life muddled up. It shows an intolerable lack of care in the reporter and a lack of interest in the story by whoever sent it down. I understand the reporter was Stan Gebler Davies. He is clearly unreliable. I request you suspend him from all activity for a month.' It did more than keep you on your toes.

An April 1974 memo to me: 'The Lon- doner's Diary should, on the whole, try to avoid treating its readers like ignorant idiots. An innocuous paragraph about Henry Moore is ruined today by the patro- nising remark: "Moore is now regarded as probably the greatest sculptor in the West."' Charles's clipped and crisp manner of speech easily translated on to paper. He was fastidious about accuracy. 'Just get it right,' he would say. I can remember sleep- less nights worrying about making mis- takes. And, while we had the lino-type operators and proof readers on whom to heap blame for typos, errors of fact were harder to deflect.

August 1972, Wintour to Deedes: 'Nicholas Soames was giving me some stick at the weekend because the Diary ran a story about a budding romance with Christina Onassis. He does know her; spent a day in Monte Carlo as she is an old friend of the family; he is not an admirer of hers at all. What really riled him was that you were ringing him about Arabella's wed- ding and never checked about Christina.' Charles Wintour had a clear idea of what the ideal Londoner's Diary should be and described it to me thus: 'To go to a decent London dinner party without having read the Diary would be to go out unprepared for proper conversation.' A bit over the top but we knew what he meant.

We were clearly failing in December 1971 when I got the following: 'London is full of parties just before Christmas. And parties are full of talk and sometimes action. We seem to be running out in this field. The Diary is too remote from inter- esting people, too dry.'

Charles Wintour was passionate about London, and everything that went on in London, most particularly in the fields of politics and the arts. The country, as in countryside, was somewhere else and had no part in his Evening Standard. It is why the paper was indispensable to those who lived in London. He expected his staff to immerse themselves in London life, and it was not career-enhancing to be a com- muter.

We were his eyes and ears to inform first Charles Wintour, then Evening Standard readers what was new; what was worth watching or listening to; what was in; and what was out. To be truly in touch, you just had to buy the paper.

In order to keep up with all this, we would make outrageous suggestions for trips abroad which were treated with indul- gence, bordering on the paternal. A request was made by my predecessor on the Diary, Paul Callan, about whether he could accept a free trip from Qantas, tak- ing in New York, San Francisco, Fiji, Auck- land, Sydney, Melbourne and New Delhi. In return for this freebie, Callan writes in his memo to Wintour, Qantas 'would be mentioned six times in the Diary over a Period of a year — which seems quite rea- sonable'. The editor replies in terms which today would seem saintly — and lets him go. To my own request to accompany the QE2 on a part of her 90-day, £9,000 per head round-the-world cruise in 1974, our great mentor gently responds, 'It is a good idea, but I don't think we can afford it' And, like all great leaders of men, Charles could praise as well as condemn. There are, happily, leavening notes of praise. March 1972: 'The Diary is getting better and better. Today's edition is a new high point.' You could live on those for months. But there could be some sharp observations about staffing. 29 October 1971: 'Penny Junor is a summer relief reporter. I think summer is now over.'

He could even sympathise with the underdog. Thus, on 28 March 1973, Wintour to Deedes: 'I believe that we ran a rather rough paragraph about the New Statesman's anniversary party. We don't want to run the New Statesman down. It's going through a very difficult patch and we might fmd some- thing nice to say about it sometime.'